Going to the movies gives me anxiety, and since I see around 150 movies theatrically per year, that’s become a problem. I’ve written in the past about how the joy of seeing a movie in the theater is an experience more often than not spoiled by other moviegoers. It’s actually rare that I see a movie on the big screen and don’t observe some bad behavior forbidden in the unwritten social contract among spectators. This is particularly grating when it’s a movie you’re really excited about or enjoying at the moment, and you’re taken out of it because some patron keeps checking their texts or social media throughout the show—and even if they attempt to do so inconspicuously, it’s still blatantly obvious when a dimmed smartphone appears in a darkened theater. Some people answer telephone calls or talk to each other throughout the movie. Many attempt to whisper, although they haven’t mastered that subtle art of lowering their voice to a decibel unheard by moviegoers one or two seats away. Countless others simply talk, without any effort to muffle their remarks. In these situations, the movie experience is lessened, if not ruined, by an inconsiderate few.

As Jean-Paul Sartre wrote, “Hell is other people.” Other people accelerate my anxiety, making the moviegoing experience, or at least the minutes leading up to the start of the movie, one of dread. In the time before the show starts, I sit in the theater, trying to read the audience and pinpoint which of these people will be trouble. Is that person checking social media during the trailers going to keep checking their phone throughout the show? Did those parents really just bring a baby into this movie? Is that elderly couple talking loudly before the show going to continue to do so once the movie starts? The anxiety continues well into the movie. Why did these people just show up ten minutes into the feature? Are those teenagers going to giggle all the way through this drama? Am I going to have to shoosh them or ask someone to shut off their phone? Do I want to deal with the sort of confrontation that, even if handled politely, could end up distracting other moviegoers? Do I really want to leave the theater, miss several minutes of the movie trying to locate an employee, only to have the manager do nothing about my complaint? Can’t we all just sit quietly in the dark and enjoy the show?

It’s neurotic, I know. But there’s nothing worse than trying to enjoy a movie and yet be constantly distracted by someone’s rude behavior. And so, I do everything I can to reduce the potential distraction. I prefer matinees, and I tend to avoid late-night shows, which are usually frequented by rowdier crowds. If I feel someone is going to be distracting, I change seats and move far away to ensure the viewing experience is free of interference. Of course, with the relatively new trend of seat reservations, which inevitably leads to more sold-out shows, changing seats at the last moment is no longer always an option. There have been times when I’ve been trapped near someone so irritating that the movie was ruined, which in turn shapes my inevitable review. Perhaps I didn’t like A Quiet Place as much as I could have because people were audibly whispering and visibly checking their phones during the hushed, dark presentation.

Fortunately, this sort of anxiety has been seriously reduced in the last six months because an Alamo Drafthouse opened near me in the Twin Cities. As you probably already know, Alamo Drafthouse cultivates a prime cinephile experience far above other theater chains ranging from AMC to Marcus to Emagine. They specifically call out many of the aspects that have twisted modern moviegoing into a frustrating, if not annoying night out. Since the Twin Cities location opened in the fall of 2018, over the past half-year I have attended the Drafthouse theater over a dozen times, and each visit has resulted in a great moviegoing experience. It’s become a reliable location for an anxiety-free movie screening.

For the uninitiated, the Alamo Drafthouse movie theater chain was launched in 1997 in Austin, Texas. They have steadily expanded in the last two decades to 35 locations throughout the United States. Their business model is designed to provide “The best film, food and drink all in one seat.” But what does best mean? It means they show independent and vintage films you would probably never see at your local multiplex, but also your usual helping of mainstream fare. For instance, my first film at a Drafthouse was a repertory screening of The Blob from 1988, and it was a blast. The best also means they hand-pick titles like Luca Guadagnino’s Suspiria to screen for their Victory rewards members a week or more before the official release date. It means they don’t dim their projectors, they have superb sound, and frequently offer 35mm screenings for devotees of celluloid.

In an age when movie theaters aim to provide extras, such as dine-in food options and adult beverages, the Drafthouse has it figured out. The Woodbury location is stocked with something like 30 draft beers, most of them from local brewers. The food menu isn’t the usual assortment of frozen chicken fingers and pizza that you find at other movie theater chains. Alamo Drafthouses have chefs on staff that create gourmet salads, sandwiches, and other entrées. I particularly enjoy their queso dip; their ridiculously tasty truffled parmesan popcorn; and the fried chicken sandwich with spicy sriracha-soy, slaw of shaved brussels sprouts, cabbage, and scallions on a toasted bun. The point is, you’re getting food and drink that’s being prepared with care by people who like good food, and you can taste it.

When you place your order, you do so with an order card—a little piece of paper that, when turned upright, alerts a server that you have a request. The server then quickly comes by, careful to squat down in the aisle so they’re not a distraction, and takes your card. If they need to communicate with you about a request or an issue with the bill, they do it in writing, so as not to distract other spectators. You get your bill delivered about 40 minutes before the show ends, and if you let them swipe your card in advance, there’s no need to linger once the end credits begin to roll. 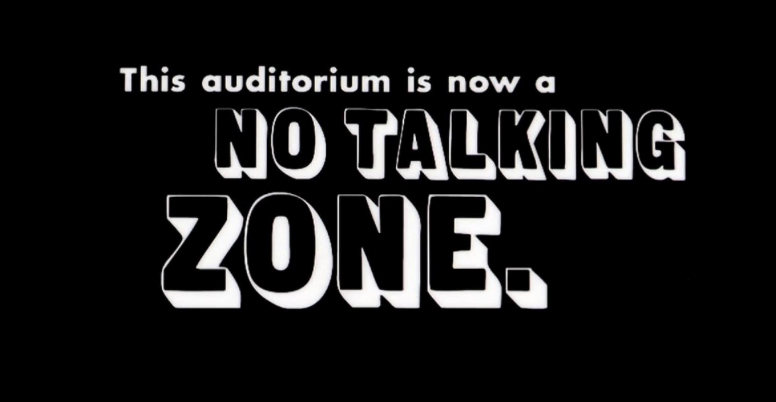 Best of all, Alamo Drafthouse is famous for their no talking, no texting policy. If someone becomes a distraction, you notify management with an order card. The offending party receives one warning before they’re asked to leave. Although I’ve never actually seen anyone kicked out before, I’ve used my order card to complain about noisy patrons, and I’ve felt a sigh of relief afterward. As the movie is preceded by an impossible-to-ignore message that talking or texting could get you ejected from the theater without a refund, it seems that most viewers are quick to stop talking after that first warning from a manager. The Drafthouse also forbids late entry to the show and reinforces policies such as no babies or unaccompanied minors to cut down on distractions. Indeed, they seem to have thought about and resolved every situation that gives me anxiety about going to the movies.

It gets better. Some moviegoers grow frustrated with the number of trailers and commercials before a show. I like how the Drafthouse only runs three or four trailers at most, and they don’t show commercials before their features. Instead, they have a customized pre-show that’s worth arriving at the theater a half-hour early to see. Take for example my recent screening of Alita: Battle Angel at the Twin Cities location. Because it’s a film about cyborgs in a futuristic world, the pre-show consisted of several vintage videos, including a toy robot commercial, clips from a strange Russian robot musical, and a scene from Family Matters in which Steve Urkel invented a robot that, yes, dances the robot.

Not every aspect of the Drafthouse is perfect. Their seats are comfy, cushiony black leather (or leather-like) with an electric recline function, but they’re closely situated and arranged in tables for two. The limited space between seats is a bit intimate for my liking, unless I’m seeing a movie with my wife. And if I want to see a movie alone in a packed show, I’m sharing a table with a stranger. But these are minor concerns in an otherwise worry-free experience that caters to cinephiles. Just walk down the hallways adorned with vintage poster reproductions of cheap B-movies and you can feel the film enthusiasm. 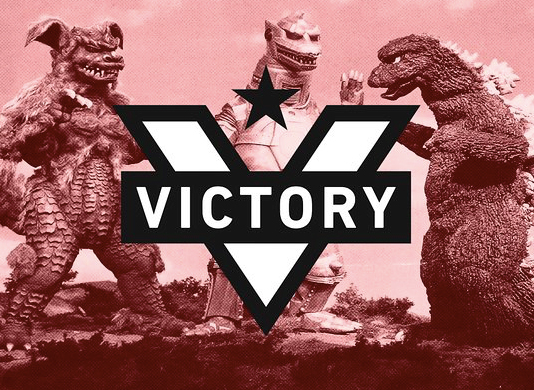 There are other problems in the budgetary and logistical realm. Speaking personally, one issue is that I live about a half-hour from the Twin Cities location, which isn’t so much in Minneapolis or St. Paul but located out of the way in the eastern suburb of Woodbury. There’s a closer, competing theater five minutes from my home. Due to the drive, the Drafthouse has become my special occasion theater reserved for event screenings and movies I’m especially interested in seeing. In the last six months, I’ve caught titles like BlacKkKlansman, Ganja & Hess, the aforementioned Suspiria, and a showcase of Laurel and Hardy two-reelers at my local Drafthouse. But the long journey and high-end prices add up, which makes it unfortunate that the Drafthouse’s Victory rewards program doesn’t have a subscription discount similar to the rather excellent, money-saving A-List program offered by AMC.

It doesn’t really matter what the Alamo Drafthouse costs more because it offers an experience that is guaranteed by policy, action, and repercussion. None of the other theater chains can say that with such confidence. Of course, people are no less hellish just because the Drafthouse exists. There will always be some jerk in the audience who feels compelled to insert themselves into your experience. But such people are less likely to be hellish and annoying in the Drafthouse, where like-minded and respectful moviegoers flock for a better theater experience. And I can visit a Drafthouse without worrying about a fellow patron disturbing my good time, because I know that if such a situation arises, they’ll deal with it. Their strategy alone relieves my apprehensions about moviegoing, and without that tension in the way, I’ve been reminded why fell in love with movies in the first place.