There are moviegoers out there who feel compelled to talk during the show. You’ve no doubt experienced this. Or perhaps you’ve perpetuated it. Talk is not always the problem. Some of you know how to contain the sound of your voice so that even neighboring patrons wouldn’t hear a brief remark. Then again, others seem oblivious to the fact that other moviegoers are seated nearby. They could not care less about the common knowledge that this behavior is socially unacceptable.

It seems strange, doesn’t it? Everyone knows this behavior is rude. And yet, few screenings go by where I don’t have to endure moviegoer talking at some point. A person whispers a question to their partner: “Who’s that?” as a new character appears onscreen. They announce what’s going to happen next, as if they’re the only one in the theater to have figured it out: “He’s going to kill that guy!” or “I bet she’s the killer!” And then later, “Yup, I knew it, she’s the killer.” Except, they don’t really whisper, do they? They talk lowly. You see, there is a difference. 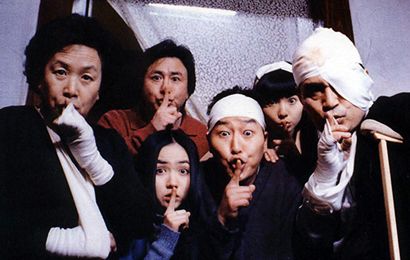 A whisper is carried along by a light, exhaled breath, and barely registers as a voice. The sound moves directly into the intended party’s ear, and requires you to put your mouth next to the person’s head, practically inside the ear, to be at all audible. A hand over your mouth helps too, to block any sound from escaping. Or maybe you don’t make a sound at all. You could mouth the words and the recipient can read your lips. It’s very easy. Anyone should be able to master these skills (then again, these are not skills; with rare exceptions for the developmentally disabled and very small children, all human beings should be able to carry out a whisper).

Talking lowly, however, is still talking just with the volume turned down. People who talk low in theaters rarely bother moving closer to their intended addressee when doing so, and therefore their voice must carry for the foot-or-more distance between the talker and the listener. This means the sound will also carry to people in front or behind them, and also people down the aisle. Would it be so difficult to lean over, put your hand over your mouth, and attempt to control the volume of your voice?

Watching a movie is about giving yourself over to the experience onscreen, at once absorbing the simultaneous visual and aural input. By talking during a movie, you reject the movie experience and moreover set yourself at a higher level of importance than the movie within the arena of the theater, but also higher than your fellow patrons. Moviegoers have not paid to watch or listen to you. They paid for the movie. You are not more important than the movie. To think otherwise must be some kind of egomaniacal personality disorder. Somewhere out there, scientists are working on classifying this disease.

Of course, there are exceptions to every rule. For example, audiences should not be faulted for reacting to a movie. For laughing when laughter is intended, for shrieking when the movie wants to scare you, for gasping when a plot twist reveals something unexpected. Such reactions are only natural and cannot be helped. What can be helped are patrons who talk about what they’re watching, supply their opinion on this or that moment, or giggle amongst themselves at inappropriate times. Another example: If the theater is relatively empty, it’s okay to sit far away from other moviegoers and whisper oh-so quietly, as long it doesn’t disturb others. The concern here overall is not bothering others with your presence, allowing everyone the same cinematic experience. 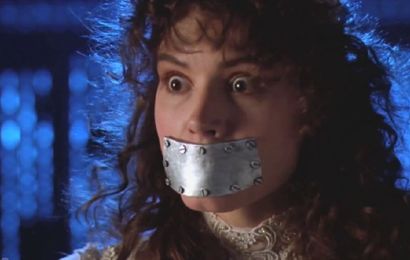 If you’re so compelled to talk during a movie, then perhaps the problem is you. Do you have a short attention span? Do you have trouble making it through an entire movie? Perhaps then you shouldn’t go to movies. You could stay home and stream Netflix. Or you could watch television instead—after all, TV shows are usually shorter, requires less attention, and generally speaking no one cares if you talk in your living room. Important concept: The movie theater is not your living room. If you take one thing away from my remarks, let it be this.

There’s a tradition some moviegoers have, and I think it’s a good one. After a movie, they go out for a cup of coffee or meal and discuss what they’ve seen. They sit down in a place where it’s socially acceptable to talk—where they can speak loudly or at length—and share their opinions. Here, all topics are open for discussion: plot details, performances, camerawork, etc. You don’t even have to talk about movies. After all, you’re on your time now. When you’re in the communal setting of a movie theater, you’re on group time and must consider the experience of your fellow moviegoer. The point is, people expect talking in coffee shops, restaurants, and other such places. They don’t, and certainly shouldn’t have to expect it in movie theaters.