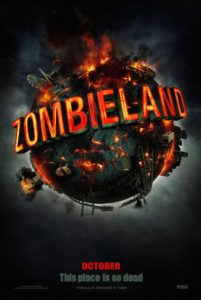 Zombieland rides effortlessly on the fundamental natures of its central characters as opposed to a reliance on the devices of its horror movie setting. They’re the last survivors in a world overrun by undead victims of a zombie plague, but they’d be interesting in any landscape, apocalyptic or otherwise. That we have no choice but to empathize with their situations, because as viewers there’s simply no one else onscreen to root for, is beside the fact. They’re the engine of an inventive horror-comedy that’s exciting, thrilling, and unrelentingly hilarious throughout. It’s filled with a pitch-perfect balance of humor and horror, and the zippy editing and on-screen animations make the experience energetic and meta. It’s also the most fun I’ve had a movie in some time.

Before the wonderful slow-motion title sequence reminiscent of the one in Watchmen, narrator Columbus (Jesse Eisenberg) lays down some ground rules for staying alive, each tip erecting seemingly tangible signage in the background. Some lessons feel pulled directly from Max Brooks’ Zombie Survival Guide, whereas others, such as “Rule #1: Cardio” contain brilliant logic. Because when there are no cars around and zombies are closing in, you need the capacity to run long distances and fast if you want to avoid becoming lunch. This, Columbus explains, is why the fatties died first. Throughout the film, other rules are added or altered to fit the situation—listing off a character’s personal statutes is an all-too-common movie trope, but the way first-time filmmaker Ruben Fleischer presents this cliché makes it fresh and relevant to the end.

A college student, admitted virgin, and videogame nerd before the outbreak, the anal-retentive Columbus avoids being eaten because he explicitly observes these rules, which feed off his meticulous fears and paranoia. Strange that when he meets up with the southern-fried brute Tallahassee (Woody Harrelson), a rootin’-tootin’ zombie killer who’s armed himself to the teeth, the two get along and resolve to pair up. Here are two horror movie characters that don’t make stupid mistakes like going to the bathroom alone, which in another film would cause the audience to shout at the screen. When nobody else could, they lived through zombie terror on their intellect, or in Tallahassee’s case, his penchant for violence.

Now they just need something to do. They each have middling conflicts to surmount: Columbus wants to find someone to love because he’s always dreamed of brushing a girl’s hair behind her ear. He also has a deathly fear of clowns, which inevitably materializes in a zombie-clown showdown. Meanwhile, Tallahassee searches for the world’s elusive last remaining Twinkie. Their respective searches take disastrous, ironic turns. Tallahassee stumbles upon a Hostess truck filled only with Sno Balls, and Columbus meets two female grifters that dupe our gentlemen heroes out of their car and guns. Enter Wichita (Emma Stone) and her 12-year-old comrade Little Rock (Abigail Breslin).

By now you’re realizing these characters refuse to name names; in their survivalist fear of becoming too attached to one another, they’ve taken the name of their city of origin. A clever pair, the young ladies eventually concede to join Columbus and Tallahassee’s dynamic duo, and they all travel cross-country to a California amusement park that supposedly exists zombie-free. Though, they’re hesitant to rely on just anyone. Who can blame them? They’ve seen everyone they know and love eaten by zombies; survival takes a certain amount of emotional disconnection after that. But Zombieland is also a traditional road movie whose characters become loveable and acquire gradation as the journey progresses. It’s difficult not to fall in the love with the makeshift family along the way.

As movie monsters, zombies can do very little. They slog along, sometimes they run, and they appear out of nowhere hungry for human flesh when the movie needs something to happen. But as a rule, zombie movies must be about something more to be interesting. George A. Romero, who invented zombie horror with Night of the Living Dead, made Dawn of the Dead about how malls make us into mindless consumers, whereas his later continuation Land of the Dead attacked the Bush Administration. Romero still defines this genre with his films, and still, his zombies provide scathing metaphors. Zombieland’s ongoing theme is about making yourself a family in the absence of a real one, except everyone in this foursome has severe trust issues. Zombies are garnish.

Fleischer’s fast-moving brand of zombies are at times scary, causing a moment or two where we writhe in our seats until our heroes escape, but mostly they’re comic relief. Tallahassee treats the world like a shooting gallery with undead targets, employing baseball bats and car doors to entertain himself, and to quell his frustration with where he’s ended up. Random asides, introduced by Columbus’ narration, showcase the “Zombie Kill of the Week.” Watching zombies get smashed or blown away has a certain hilarity about it, keeping the stakes low, whereas Fleisher’s film also has a pure comic tongue. Sharp dialogue and biting wit prevail throughout. And then there’s the cameo by Bill Murray, which may be one of the funniest five minutes in cinema, certainly of 2009.

Zombieland doesn’t send-up zombie movies by using in-film references to its genre predecessors like Shaun of the Dead does; it refreshes the material through original characters and smart dialogue that pops with humor. There’s something ingenious about how writers Rhett Reese and Paul Wernick compose a film whose characters must overcome conflicts that are remedial under the circumstances, yet in spite of their pettiness, they remain wholly interesting. Somehow we actually care if Columbus finally gets to brush a girl’s hair behind her ear, or if Tallahassee gets his Twinkie because,  in a world teeming with zombies, you have to savor the little things. Zombieland is a small film at barely 90 minutes, but it entertains, produces a constant string of laughs, and will probably be endlessly rewatchable.