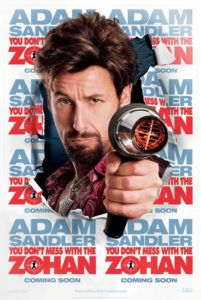 You Don’t Mess with the Zohan is a below average Adam Sandler movie, furthering my belief that as he rakes in the millions on each picture, his desire to try lessens. How much you like the movie depends on your tolerance of repetition via jackhammer-subtle humor undulating about like the title character’s crotch.

Zohan (Sandler) is an Israeli counter-terrorist, but he might as well have pink spandex with a “Z” stenciled on his chest—this guy is a superhero. He plays ping pong with grenades, tosses hacky sacks from his butt cheeks, and leaps from building to building with more grace than a certain web-slinger I could mention. But Zohan’s heroics battling his Palestinian archenemy The Phantom (John Tuturro) have been in vain, as he tells his parents (Shelley Berman and Dina Doronne) he wants to move to America and become a hair stylist. They laugh and question his sexuality, but his choice should come as no surprise, as Zohan prefers spending his time on the beach disco dancing naked (Sandler clearly got in shape for the role), or, at the very least, in a Mariah Carey t-shirt.

At first, Zohan’s random Mariah Carey fixation is cute, in the same way his affinity for disco and Paul Mitchell is cute. But when Carey herself shows up late in the film, she’s seemingly there for the sole purpose of promoting her new album, which, you should not buy. I feel the need to un-promote the album, whatever it be named, simply to equalize the sheer volume of endorsement allowed into the movie by Sandler and director Dennis Dugan (who also made I Now Pronounce You Chuck & Larry).

Arriving in America under the name Scrappy Coco, Zohan eventually finds work at a small salon cutting hair for Dalia (Emmanuelle Chriqui), the movie’s resident “Hottie”, who just-so-happens-to-be a Palestinian. Between thrusting his massive package every which way and shagging his senior citizen clients, Zohan determines Dalia, despite her nationality, could be The One. But his sex-infused hair stylings garner some attention to Dalia’s salon, and Zohan finds himself recognized by a cab driver (Rob Schneider) bent on having him killed by The Phantom. As if that wasn’t enough plot, Dalia’s salon is under fire by the wealthy Mr. Walbridge (Michael Buffer), who hires white trash racists (including Dave Matthews?) to force small business owners from their property to build a mall.

I suppose you could argue that, like Chuck & Larry, Sandler and Dugan mean well by preaching understanding and equality with lighthearted potty humor. But once again, while the right hand is waving its finger at intolerance, the left hand is making lewd gestures toward a container of hummus. For every pigeonhole filled-in with sentiments that the Israeli and Palestinian conflict has gone on long enough, writers Sandler, Robert Smigel, and Judd Apatow perpetuate an outline for the racial profiling of electronic store-obsessed Middle Easterners.

The movie is incessantly long at nearly two hours, taking its sweet time to build characters that are never more complicated than an off-key stereotype. The movie is basically an extension of that reoccurring mid-1990s SNL skit involving the Greek gyro peddlers. “You like-a the juice? Yes, you like-a the juice!” Sandler, Schneider, and Smigel were all involved in that one too, except back then their four jokes would last only a few minutes. And come to think of it, their accents were, in essence, the same as here. Greek, Israeli, Palestinian, French… it’s all relative.

Adam Sandler shows occasional signs of growing up on pictures like Punch Drunk Love and Reign Over Me, but another part of him will always be the goofball that sung “Red-Hooded Sweatshirt” on SNL. And there’s nothing wrong with adolescent humor, just that there should be some audience consideration. Indeed, You Don’t Mess with the Zohan is probably funniest to Sandler and his band followers (including Kevin Nealon and Chris Rock), who no doubt enjoy quite the laugh writing and performing their increasingly awful comedies, and who seem to have lost any hope of making a salient movie. If only we could laugh along with them…