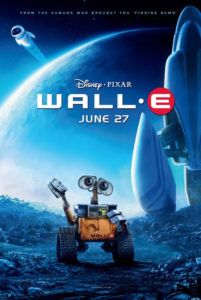 Crowded with lively children and their barely-coping parents, the theater teemed with anticipation. As more youngsters piled in, one boy screamed the movie’s name like it was a battle cry. Everyone was eager for the lights to go down and the show to start, the adults as giddy as the kids. Family-friendly movies are the only kind where I expect interruptions; antsy youngsters unable to remain quiet and still for the duration simply come with the territory. But when WALL•E began, the theater went silent. No children crying. No wowed shouting at the screen. Everyone was in awe.

This is extraordinary because the utter enchantment of this audience testifies to the durability of cinema’s roots, namely the film’s likeness to silent era pictures by masters like Charles Chaplin. WALL•E doesn’t stuff our faces with pop-culture references, nor are images accompanied by explanatory dialogue. Rather, the film makes us think about what we’re seeing: immediately clear and delicate imagery that communicates by means of body and behavioral language. Prior to the feature film, Pixar Animation Studios traditionally includes a short; in this case, a gem entitled Presto about a magician and his rabbit dueling over a carrot. Simple and wonderful. Running without dialogue, it’s a joyous precursor to the minimalist style of the subsequent film.

WALL•E’s story takes place hundreds of years in the future when a garbage-riddled Earth has been abandoned by humans waiting on a space station for robots to clean up their mess. Our hero is one of those robots—a boxy trash-compacter on treads, his name signified by his directive: Waste Allocation Load Lifter•Earth-Class. He’s just a little guy, and he’s all alone. He has neither mouth nor nose. We don’t know where his mechanized sounds, often elations of curiosity or endearment, come from exactly. But no matter, his binocular-shaped eyes say enough with the slightest shift in their angle.

Our robot friend zips about the structures he’s created—large skyscrapers built with millions of compressed garbage squares—and scrounges, toting along items of interest in a small cooler. Earth is a virtual wasteland, and save for a single chirping cockroach friend, he’s the only living thing there. His existence has clearly grown over time into one consumed by inquisitiveness and loneliness. From the found objects contained in his pseudo-apartment, he plays a Betamax tape of the 1969 musical Hello, Dolly!, watching with lovelorn hope as the performers sing “It Only Takes a Moment” while they hold hands. Occasionally, when he sees something beautiful, he presses “play” on his chest’s radio, scoring the moment with a tune from the film’s soundtrack. If his eyes were equipped with the appropriate ducts, no doubt they would be welling up with tears (as ours do). It’s immediately heartbreaking.

His dreams come true with the arrival of EVE, a probe-bot searching for signs of life on Earth. She’s smooth and sparkling and white, new, an explosive personality, versus WALL•E’s clunky and gentle composition. She’s gorgeous, he thinks, and proceeds to court her. Without saying too much about the plot, eventually she must return to her ship, on which he hitchhikes back to Axiom, the giant space station now housing what’s left of the human race. And this is where Pixar’s film goes from incredible to pure genius, from a silent film to a social commentary-laden adventure reminiscent of Chaplin’s best.

The human race, served by Axiom with every form of automation imaginable, has become wholly reliant on the computerization of all things. We’ve de-evolved into grossly dependent, portly blobs carted around on hovering chairs, video screens playing whatever before our faces, vacant of and without a need for independent thought—an existence enabled by the mega-conglomerate-turned-government called Buy-N-Large, which provides any manner of food in a cup imaginable. Indeed, we’ve become the complacent, lazy-obsessed robots; meanwhile, WALL•E remains the only being with a grasp of the human condition. The story’s undercurrents defend human potential as they simultaneously assert our responsibility toward planet Earth (no matter how loafing we’d like to be). Despite these heavy, largely environmentalist themes embedded within, the film isn’t preachy and remains a love story between the two central characters—their robo-love serving as the kind of exquisite passion that drives humanity to its greatest measures, or at least used to.

And all of this from robots with vocabularies less than your children… But that doesn’t mean they’re not speaking to us with every buzz or hum. Legendary sound designer Ben Burtt, a devotee to Lucasfilm Ltd. through the Star Wars and Indiana Jones franchises, provides the film’s mechanized sounds from distortions of every noise imaginable. When the robots do speak, their voices are stretched and metallic, but imbued with personality. R2-D2 had the world wrapped around his finger (if he had a finger) with just a few beeps and clicks. Burtt assembles WALL•E (voice of Burtt) and EVE (voice of Elissa Knight) with a range of auditory expressions, each one surprising and instantly loveable.

Writer-director Andrew Stanton, who gave Pixar its most beautiful title Finding Nemo, pitched the idea for WALL•E way back in the mid-1990s. Seen as visionary but risky, Stanton’s project was put on the backburner until Pixar established itself. But the irony of an inanimate object providing a symbol for the human spirit stayed with the filmmaker; he developed the concept over the years, adding the love story and ecological remarks, designing an ambitious film whose end result is nothing short of brilliant. And it’s clearly a labor of love from someone passionate not only about cinema but science-fiction. Axiom’s dreaded autopilot, who serves the ship’s chubby captain (voiced by Jeff Garlin), is the spitting image of HAL from Kubrick’s 2001: A Space Odyssey. The ship computer’s voice, performed by Sigourney Weaver, was no doubt cast because of her iconic role in Alien. And the genre itself has frequently popularized (and humanized) sympathetic robots in various forms from Robby the Robot in Forbidden Planet to Data in Star Trek: The Next Generation. Despite these references, Stanton’s capable hands keep the material from feeling derivative—quite the opposite, in fact.

Stanton’s visual approach is photorealistic, tweaked in every which way to appear filmed with an anamorphic lens. Earth’s air has an atmospheric, tangible feel, whereas Axiom is squeaky clean. I wondered when Janusz Kaminski, Steven Spielberg’s frequent cinematographer, was going to pop up in the end credits as a visual consultant—alas, no credit appears. Just those incomparable Pixar animators. Rays of light seem to glow through the air in different locations. What we see, the animation, seemingly comes from a camera, with an accompanying utilization of lenses any photographer would envy. This animation effect reconfirms Pixar’s place at the top of their field, and challenges everything they’ve done before. An unparalleled magic envelops Pixar’s entire output; everything they do turns to artistic and commercial gold. They’ve proven this trend time and again with eight (now nine) masterful films from Toy Story to Finding Nemo to Ratatouille. At once challenging, inventive, and engrossing, they surprise me more than any other filmmaker or production studio working today. Everyone has at least one miss, right? Not Pixar. Their films are highbrow animation, always packed with readable subtext, but insomuch that the blithe entertainment value never feels confronted, rather supported, by their commentaries. Each new Pixar film is “arguably the best”, and so here I am asking myself again: Is WALL•E their best film? I think it may be.