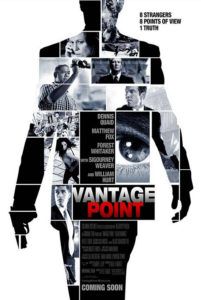 Vantage Point begins without dazzle or development behind its characters; rather, action takes off in the first few minutes and doesn’t bother waiting up. Except, we’ve already passed up all that swift editing and those swooshy sound effects once the film’s first point-of-view occurs and moves on to the next one. The gimmick is simple: view a presidential assassination from several character angles, each one with an alternate position on the ensuing events. After each character sees what he or she has to see, the film fades to white, rewinds, and places us in another station with another character, capturing new details on the whole conspiracy.

We open in Spain where the United States President Ashton (William Hurt) will be giving a speech on peace, concerning post-9/11 terrorism the world over. His motorcade moves down the city street until arriving at a square, where secret servicemen then lead him to the stage. Just as he’s about to speak, an assassin’s bullets strike him down. Panic hits the crowd. Moments later, in the distance, an explosion is heard. And then, in the center of the square, a large explosion goes off, killing dozens.

Developing around ten or so characters, the film resigns to do very little with any of them, despite each having crucial information as to who conducted this assassination and why. Sigourney Weaver plays a television producer covering the event, seeing her cameramen’s multiple angles from a safe production trailer. Dennis Quaid and Matthew Fox are secret service agents, onstage when the bullets strike, who later hunt down the assassins. Forest Whitaker is an onlooker-tourist, filming everything with a digital camera. Meanwhile, we see a plain-clothes policeman (Eduardo Noriega) pass something to a mysterious spectator (Ayelet Zurer), looking very suspicious and squinty-eyed in the process.

Each character, others not mentioned in this review included, reacts to the events in their own mini-segment, which at a vital summit is stopped, then rewound back to the beginning in place of a new character’s point-of-view. This happens several times throughout the picture, until the last half-hour, when the film decides to move forward, without any more rewinding, and finally, conclude the story. Ostensibly, the film is two acts: the first act has several parts recurring through various characters, the second act wraps up their established conflicts.

While I see the promise of this device conceptually, the execution demands a skilled hand to avoid monotony or tedium, which is exactly where this film finds itself (all too quickly). First-time feature film director Pete Travis and his overexcited editors (Stuart Baird, Sigvaldi J. Krason, and Valds Skarsdttir) chopped their footage, compiling a film made up of shots repeated over and over again. The audience begs just to see something new, off the ongoing loop Travis and his editors set us on from the very beginning.

And yet, I see vast potential for this real-time laden, multi-story puzzle box. If only someone with skill, and perhaps a more structured script, had foreseen the end result. Screenwriter Barry Levy, who has not received a single screen credit aside from this, gives up on his own concept two-thirds of the way through his film. Suddenly, there are no vantage points or rewinding, just forward motion until the unsatisfying ending. The transition is awkward, leaving the audience baffled as to its abandonment. Either stick to your guns or leave them in your holster.

Imagine if Brian De Palma had directed this film, carting along his frequent bravado camerawork and clear structural adherences to remain devoted to the initial point-of-view concept. I see each characters’ vantage points filmed with ongoing, unbroken takes, uncut like the opening of Snake Eyes. I see multiple angles of the same events, literally placing the audience in separate positions for each alternate perspective. I see a film that lives up to its promise and doesn’t pull punches because it can’t figure out how to make the finale work.

Vantage Point has its moments, one genuinely exciting extended car chase sequence, and a cast that gets by on prestige alone. Every character has only time enough to remain one-note, leaving us with a semblance of familiar faces doing very little. And the film’s implementation of the central plot device becomes, frankly, annoying. We realize there are about forty-five minutes of footage here and ninety minutes of screen time; the rest is looped repetition worse than a Hanna-Barbera cartoon.