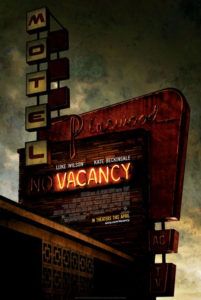 Alfred Hitchcock devoted himself to plots that crescendo and then abruptly end after climaxing; he devised this scheme to always keep the audience in suspense, never letting the tension ease until the last frame. Throughout films like Saboteur or North by Northwest, unexpected pangs of suspense suddenly hit the viewer, which increase as the film plays out, until the climax, wherein the killer dies or the mystery is revealed or the hero is proven innocent. And just when other filmmakers would take the last five minutes of their picture to wrap everything up, letting audiences know it’s all going to be okay, all at once Hitch would roll credits or throw “The End” up on the screen, never giving his audience the satisfaction of relief.

Nimród Antal’s Vacancy may not be up to Hitchcock’s standards aesthetically, but it follows The Master of Suspense’s filmic philosophy well enough to recommend as an entertaining thriller. Amid more horror movie narrative tropes than most films in recent memory, the story may be derivative, but it excels where others fail: Antal’s presentation is sound. From the opening credits sequence, which compares to that of Catch Me If You Can, to the music that accompanies it, audiences enter a post-Hitchcock-era suspense film paradise.

David and Amy Fox, played by Luke Wilson and Kate Beckinsale, are returning from her parents’ wedding anniversary party to California, where they plan to sign divorce papers. Driving in the middle of the night, David makes the wrong move and takes a shortcut (# 1 horror movie Don’t), driving through backroads that aren’t on his map, which, of course, he doesn’t know how to read. After their car breaks down, they walk to a nearby motel, where Mason, the manager (Frank Whaley), sits in the office’s back room, from where David and Amy can hear a woman screaming. Bickering at each other, the soon-to-be-divorced couple doesn’t follow their instinct to leave but instead are relieved when Mason shuts off a television and the screaming stops. Mason insists they stay in the honeymoon suite, as they’re his only customers in three days (staying in a deserted motel where a weirdo manager is the only tenant: #2 horror movie Don’t.).

Their room is shoddy and needed redecorating in 1974, but it’s a bed nonetheless and they’re both tired. None of the television channels work, so when David notices videotapes resting on the VCR, he puts one in. David recognizes that the grisly video, shot from multiple angles, is a snuff film, and the room it was filmed in looks exactly like their room. David and Amy realize the motel staff has killed several people in their very room and recorded it, and now they have conspicuously left tapes out for future victims to find, watch, and scare the bejesus out of. What’s worse, David and Amy are next.

Everything about Vacancy’s setup may be clichéd, but that doesn’t matter. The tired plot of protagonists driving through the boonies or vacationing in some foreign land and then getting slaughtered by the locals has once again been employed for the arrangement. But unlike Turistas, The Hills Have Eyes, and Wrong Turn, Antal’s film doesn’t use gore and blood to frighten audiences; it uses fear—the best tool filmmakers can employ for quality suspense. The bloodiest moments in the picture occur on the tapes watched by Luke Wilson’s character; the rest anticipates what could happen should these killers get their mitts on David or Amy.

We don’t get a lot of backstory, as the film doesn’t rely on in-depth analysis of character; it’s just simplistic enough that we’re entertained by the struggle between bad guys and good guys. Frank Whaley’s Mason, a movie voyeur that would have been more interesting with a fleshed-out profile, occupies a lesser presence than a similar character like Psycho’s Norman Bates, but serves his purpose as the film’s resident scopophiliac schizo. And even though the film relies on several formula devices (such as our unhappy couple reigniting their love through a traumatic situation), we ignore that fault, as the whole movie hinges to a door where on the other side brood masked men with knives. Antal bangs on that door with his fists, creeping out his audience with a well-executed claustrophobic situation.

I was pleased to see Luke Wilson commit himself with such marked trembling intensity, as it shows the actor has capabilities beyond comedic performances. His semi-dramatic part in Wes Anderson’s brilliant The Royal Tenenbaums and his role in Vacancy show the actor can handle more than junk like My Super Ex-Girlfriend, so why is he so drawn to almost exclusively comedic roles? There’s something in his shaky, distinct voice that lends the actor the appearance of genuine fear, making him an ideal horror movie protagonist.

Don’t expect originality or satisfying character developments from Vacancy; expect to jump and squirm in your seat. For every worn-out horror film mechanism used, there are equal parts of well-directed and acted thrills. The film builds on those thrills, crescendoing until a curt-but-satisfying finale recalling Hitchcock’s desire to leave a suspense residue lingering inside the viewer.