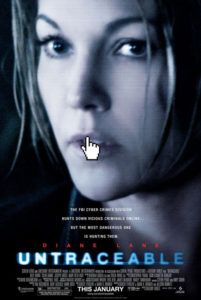 Some advice to upcoming Hollywood thrillers: If looking for a way to establish your serial killer as a merciless psychotic, depict him torturing a kitten. Untraceable employs this very atrocious act, leaving us hating the kitten-murdering bastard and hoping our hero, Diane Lane, brings him to justice. There’s just no reason to be mean to a kitten; they’re so cute and soft and clumsy. Even if a filmmaker wanted to illustrate why Adolf Hitler was one of the world’s most awful madmen, don’t depict grim Holocaust scenes, show him torturing little Boots or Toonces, and we’ll get the idea.

As you can probably guess, Untraceable is an unrelenting serial killer movie shaken up with gristly “torture porn”. The result is entertaining, though hypocritical by its own devices. Lane plays Jennifer Marsh, an FBI agent in Portland, Oregon’s cyber-crimes division. A new website called www.killwithme.com has launched and features victims strung up in elaborate torture devices. The killer’s first victim is the aforementioned kitten (clearly conceived in CGI), may it rest in peace. The second victim is a man who is tied down and incised slightly, barely bleeding. A hit counter monitors the site’s traffic; as more visitors view the site, a drug is released into to victim’s body, slowly thinning his blood, ostensibly turning him into a hemophiliac and making him bleed to death from those tiny cuts. This is just one of the movie’s several elaborate deaths.

Veteran actress Lane does a fine job convincing us she’s strong and smart enough to catch this sicko, meanwhile protecting her mother and 8-year-old daughter from the home-grown threat. Her character, Marsh, her techie co-worker Griffin (Colin Hanks), and local Detective Eric Box (Billy Burke) team up to find the killer, and they discover he’s covered his tracks well. They do know, however, that he lives conveniently in Portland. Director Gregory Hoblit (Fracture) made one correct stylistic choice and filmed on location in Oregon to give his picture dreary, rainy skies and atmospheric drama. All victims are Portlanders, so nationwide authorities refuse to allow Marsh’s team access to their “super computer”, which could locate the user and shut down his site.

Marsh’s FBI superior decides to hold a press conference, cautioning users not to visit killwithme.com, calling them accomplices to murder if they do. The movie condemns people who see the internet as disconnected information, something on which they can anonymously click and see: for example, Saddam’s execution or a reporter’s decapitation. The FBI’s warning, in turn, creates free advertising; the killer’s next victim dies in half the time it took the first. We see the enthusiastic-if-irresponsible reaction from users, as they log into the site’s message board and post cruel messages—all too familiar in their detached tone for any of us who’ve logged into a board where incessant jerks dominate with callous rhetoric.

As part of the promotional material for Untraceable, viral marketing gurus developed an actual killwithme.com site. Before entering, a prompt warns that entering may cause harm to others. If you decide to proceed, the site informs that 91% of users chose to enter, then asks “Where are your morals?” One could ask the same question to this movie, for depicting kitten torture and abundant human death without a hint of restraint in its representations.