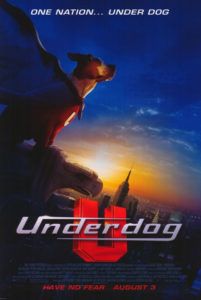 In the whole sordid history of anthropomorphized superheroes, Underdog stands next to Mighty Mouse and the Ninja Turtles as one of the best. Then again, look at his competition: Darkwing Duck, Bucky O’Hare, and the Biker Mice from Mars—they’re not exactly Justice League material, are they?

General Mills, in the early 1960s, invested in Saturday morning cartoons. What better way to sell cereal than not-so-subtle advertising? Underdog debuted on NBC in 1964; over the next ten years, 124 episodes were produced and the cartoon was eventually syndicated. The super-dog had children hoping their own pups would don a cape and fly. Even nowadays the occasional episode airs on television. That’s not to say it’s retained any popularity among today’s children since I haven’t seen the show personally since about 1987.

Curious then that Walt Disney Pictures would choose to suddenly revamp the franchise as if coddling some nonexistent demand for talking animal movies, which I think died with Look Who’s Talking Now.

Underdog stars Leo, a cute beagle “enhanced” with CGI-driven eyebrows and an articulated talking mouth. Warner Bros.’ 2001 movie Cats & Dogs also featured a talking beagle, voiced fittingly by cracking puppy-voiced Tobey Maguire. Here, Shoeshine, the alter-ego of former crime dog Underdog, is voiced by Jason Lee. (If you’re a fan of The Incredibles, it’s a little weird to hear the voice of Syndrome coming from such an adorable puppy). Lee’s voice makes for a spot-on performance, especially given Shoeshine’s potty humor, which occasionally includes laughable dog truisms. The casting and in-film references are nonetheless desperate (and obvious) attempts to “freshen up” the material. I can envision studio execs talking with enthusiasm about this project, saying, “Let’s make Underdog hip and down to earth.” …I was reminded of Poochie from The Simpsons TV show.

Underdog’s owner is a 12-year-old boy, Jack (Alex Neuberger), whose ex-cop dad (Jim Belushi) finds the pup after his security guard night shift. If you remember, Belushi also starred in the super-dog movie K-9 (which I discovered on imdb.com now has two direct-to-video sequels entitled K-911 and K-9: P.I.—brilliant!). I can’t tell you how hopeful I was during Underdog, half-expecting another Belushi-and-dog movie. But alas, no such luck.

Jack and Shoeshine become best friends, only after Shoeshine verbally confesses he can speak English. Together the two chase after Jack’s friend Molly and her Cavalier King Charles Spaniel, Polly. We quickly enter Superman territory, with Shoeshine protecting his alter ego and making Jack dish out lame excuses to Molly while Underdog saves the day.

Following the cartoon, Underdog protects Capitol City from mad scientist Simon Barsinister (Peter Dinklage) and his dim-witted sidekick Cad (Patrick Warburton). Like all iconic superheroes and their villains, Barsinister and Underdog share a creation-result relationship. Barsinister concocts an absurd plan to rule the city via genetically engineered animals; Shoeshine, a failed police dog, gets his superpowers from Barsinister, escapes, and eventually becomes Underdog.

I won’t discuss logical holes within Barsinister’s master plan, since, after all, he is a mad scientist. Dicklage provides ample bad guy fright, while Warburton plays his familiar role of simpleton (Puddy from Seinfeld, anyone?). Barsinister delivers an inexplicable level of menace; we know he’s evil, because what else but pure wickedness could harm a puppy?

Much of Underdog stays painfully faithful to the cartoon, right down to Underdog’s incessant rhyming (which might work Saturday morning over some Boo Berry, but is embarrassingly bad for a motion picture). Does he really have to rhyme everything while in costume? I’m sure it’s meant ironically, or at least as a desperate attempt to remain faithful—either way, upon its repetition, you begin to realize how lacking this film is. If only they sacrificed one or two points of homage for a more modern take (minus Poochie-isms).

The talking animal phenomenon is peculiar. Why do we want to see animals talk? Don’t we get enough of that on pet food commercials? Didn’t we learn from the poor CGI in Scooby Doo that this is a bad idea? Underdog is for Animal Planet fanatics and only the littlest of children; everyone else should steer clear.