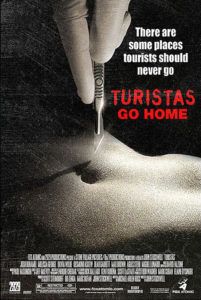 Too many horror movies circulate around the same idea: a group of sex-crazed youths, while on vacation or driving through the boonies, get stopped and slaughtered by the lunatic inhabitants of Wherever. Turistas sets its group of horny drunks in Brazil where they are eventually butchered by a local group of psychos with a cause. The movie begins when the bus carrying several vacationing twenty-something friends crashes because of an inattentive driver. Left stranded far from their destination, the group catches word of a resort on a nearby beach. After walking along an off-road path through the woods, they find a secluded paradise with a small bar on the shore. They decide to forego catching another bus and spend their time drinking and running around naked at the ideal locale, swimming and flirting with the residents.At about this time, the tourists become such horror movie clichés, you’ll be clamoring for them to die.

Turistas, in the worst way possible, is only about boobs and blood; it doesn’t pretend that we should care about its many victims, but instead hopes we get-off from the gore and nudity (and yes, there’s even a topless victim for all of those sadists yearning for a look at breasts on a hacked-up corpse).There’s no attempt at developing characters beyond nationality. We learn the main group consists of a few tourists from America, two Brits, and even a couple from Sweden. But all are essentially the same character, just with different accents. Not that we’d care if there was a back-story, but an attempt would be nice—at least we would know the producers were trying.

Instead, when the group wakes up after a night of partying and dancing (there’s a seemingly endless sequence where we see torsos galore grinding on one another to loud techno music), the yuppie tourists realize they were drugged and robbed of their money, passports, and luggage. Walking to a nearby town, they find a local man named Kiko, who was at the bar the previous night and is willing to help them. He says he’ll lead them ten miles into the forest to his “uncle’s house” where they can rest. Why, after being drugged and left for dead, would you trust someone who is potentially working for the people who put you in this situation, to guide you ten miles through a Brazilian forest for rest? But then, this movie isn’t about logic; it’s a horror movie without a brain. It has only an erection for young, tanned skin (either naked or mutilated or both).

As you can guess, the uncle’s house is a smokescreen: it plays host to a madman doctor that cuts out the organs of unsuspecting tourists, to be sold later on the black market… Don’t feel that the surprise is ruined, as the “secret” is revealed in the first shot of the movie. The surgery scenes are notably gruesome and look like excerpts from televised operations out of the third world. In a way, they recall James Bond movies—with the mad doctor giving a monologue about his depraved plans. He may as well have broken the 4th Wall, looked directly at the camera and said, “My master plan will unfold as follows…” Director John Stockwell (better known as Cougar from Top Gun) has an affinity for mostly-naked characters galloping around in popular vacation hotspots. Stockwell’s previous works include Blue Crush (about half-naked chicks surfing in Hawaii) and Into the Blue (where two dim-witted and half-naked adventurers look for treasure in the Bahamas). With Turistas, he combines his penchant for “attractive bodies” and settings with a common horror stereotype.

(The teaser poster advised audiences to “Go Home.” Even the marketing department for Turistas knew this movie sucked.) This film can be grouped with Wrong Turn, The Texas Chainsaw Massacre, Hostel, The Hills Have Eyes, and others as another pointless macabre tale about vacationers/travelers getting mutilated for either offending locals or falling into a foreign psychotic’s spider web. Turistas offers nothing innovative by way of storytelling, direction, or narrative—only blood and naked skin, of which there is plenty. We know exactly what will happen when the film begins, and by the end, when we realize we’ve seen this film before in dozens of incarnations, we’re left empty because there’s no way to get our 90-minuites back. Don’t get me wrong, even though this typical storyline has been recycled more times than I care to remember, class and skill can still be applied to it. If you don’t believe me, see Deliverance.