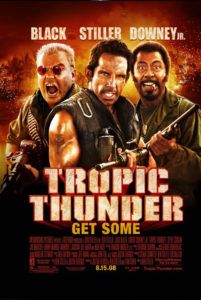 If when sitting down to watch Ben Stiller’s latest comedy you realize you’ve curiously never heard of the energy drink “Booty Sweat”, nor ever seen The Fatties part one, which apparently deserved a sequel called The Fatties: Fart 2, understand you’ve entered the Tropic Thunder universe, a sardonic place where half of Hollywood pokes fun at itself. Both commercials are advertised pre-show along with other faux trailers Grindhouse-style: one for Scorcher VI, the latest entry in a dying action franchise, and Satan’s Alley, a period drama about the unspoken love between medieval monks. That’s fake too, thank goodness. And then the movie starts…

Somewhere in Vietnam a film production dwindles. Its director (Steve Coogan) can barely manage his quartet of pretentious lead actors: Tugg Speedman (Stiller) is a blockbuster performer with a falling career who’ll do anything to be taken seriously. Five-time Academy Award winner Kirk Lazarus (Robert Downey Jr.) has tinted his skin to appear African American, and has completely lost himself in his role. Eddie Murphy-type Jeff Portnoy (Jack Black) is used to playing five roles in one flatulence-obsessed movie. And rapper Alpa Chino (Brandon T. Jackson) can’t go five minutes without plugging “Booty Sweat”.  Their film aspires to be the best Vietnam War picture ever made, but after only five days they’re a month over-schedule (don’t try to figure out that math). Coogan’s director character resolves to take the actors into the wild and shoot without benefit of caterers and TiVo. One thing leads to another, and the actors are lost and on their own, unaware that there’s no movie being filmed. Those guns pointed in their faces, they have real bullets. But oddly enough, it’s all in the script.

Despite what the press might say, it’s not a cruel or unkind movie, unless you happen to be an actor making a seven-to-eight-figure salary. If you find the result offensive, perhaps you should consider at whom the jokes are aimed. That Downey Jr. darkens his skin to appear African American says less about race and more about the obsessive, absurdist lengths some actors will go for a role—like Robert De Niro (back in the day) and Daniel Day Lewis (today). And that Stiller’s Speedman “went full retard” in another movie called Simple Jack doesn’t necessarily poke fun at the “intellectually challenged”, rather that actors like Tom Hanks (in Forrest Gump) and Dustin Hoffman (in Rain Man) jump at these roles like they’re Oscar bait. The movie’s over-the-top, inappropriate humor punctuates this satire. In other words, those offended should know better.

Settling on where exactly within the realm of comedy Tropic Thunder rests is difficult, if only because the genre has been damaged so much in the last few years by shock-humor gross-outs, and spoof after spoof. In a way, Stiller’s film is all of those things, but unlike those categories, it bears none of the limitations, and will undoubtedly have an enduring rewatchability. It’s an epic Hollywood satire wholly backed by some of Tinsel-Town’s top brass, sending-up war movies like Platoon, Full Metal Jacket, and of course Apocalypse Now and the subsequent documentary on the making of that film, Hearts of Darkness (look for the analogous doc Rain of Madness on the Tropic Thunder DVD)—not to mention Hollywood’s ongoing pursuit for big, Big, BIG! Or maybe Stiller is just getting back at Spielberg for the Empire of the Sun shoot? Unquestionably, this is a Ben Stiller comedy. That could mean a number of things depending on your point of view. I don’t mean that he’s playing his seemingly perpetual neurotic-guy persona, the one made so popular by humdrum titles like The Heartbreak Kid, Meet the Parents, and There’s Something about Mary. Rather, I mean his directorial style and writer’s influence is clear, and makes for a strong comparison to his other efforts where he’s both in front of and behind the camera—namely The Cable Guy, one of the most misunderstood comedies of all time, and another critique of the entertainment biz, Zoolander.

Fans of The Ben Stiller Show, a short-lived-but-brilliant series that aired on Fox in the early 1990s, will immediately recognize Stiller’s crazy enthusiasm throughout Tropic Thunder. At times, it appears to take itself seriously, involving us in a plot about escaping drug lords. These scenes are filmed with a dedicated style comprised of action more believable than some legitimate action flicks. Other scenes seem wholly tipped toward the Hollywood angle, either involving us in behind-the-scenes deliberation laced with brutalizing expletives thanks to welcomed cameos by Tom Cruise and Matthew McConaughey. Occasionally, the procession feels fragmented, like a series of skits, albeit hilarious ones. But no matter, the overall result is staggeringly funny. No matter how clever the concept or witty the commentary, we remain involved by the sheer Star Power emanating from the screen, which comes in currents vigorous enough to require capital letters to describe it. Downey Jr., following up his massive hit Iron Man, is having one helluva comeback year. He’s simply amazing in all versions of Kirk Lazarus, blatantly stealing the show from his two main co-stars. And though Stiller and Black give their run-of-the-mill performances as buffoons, the inspired supporting cast and procession of cameos keep us wondering how the hell the producers convinced these celebs to sign the dotted line.