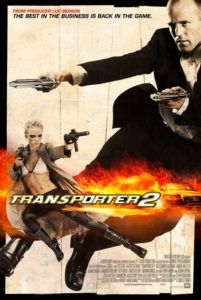 Transporter 2 (take note of the absent “The”) uses over-the-top action sequences to preposterous extremes—so unreal, in fact, that after viewing I was prompted to watch hours upon hours of Ken Burns documentaries, just to ground myself in reality again. This sequel is simply mindless; there’s no other way to put it. That my main censure of the film is that it has fewer brains than its processor almost seems like a joke within itself. Who would ever think the guilty pleasure of The Transporter would seem intelligent in comparison to anything?

Jason Statham stars in full-fledged robo-mode, emotionless, unstoppable. He plays Frank Martin, a former member of British Special Forces turned driver-for-hire. Though by the film’s title and his occupation you’d expect wall-to-wall car chases, this is not the case. Instead, Frank spends most of his time on his feet, bashing-in the heads of those unfortunate bad guys dumb enough to get in his way. All manner of props are used in said bashing, including one outlandish sequence where he takes out a half-dozen goons by flinging about a fire hose. He does this without amassing a single bruise, or even hurt feeling. I half-expected him to take a blow to the face, revealing a metal exoskeleton underneath.

The plot concerns two of the most overused devices in action movies, namely the kidnapping and the ever-ambiguous deadly virus, in that order. We find Frank in California on a temporary gig, driving a little boy Jack (Hunter Clary) to and from school. The setup is a lot like that over-edited Denzel Washington actioner Man on Fire, with the wife (here played by Amber Valletta) winking in the bodyguard’s direction while the self-important father (Matthew Modine), a top member of a US narcotics agency, is too busy to notice. Baddies pop up, attempt to kidnap Jack, who of course holds the one smidgen of feeling capable by Frank’s stony heart, and all hell breaks loose getting the boy back.

Prototypical Euro-trash movie villain Gianni (Alessandro Gassman) organizes the kidnapping, which, as it turns out, was never meant to succeed. Sometime between slicking his hair back and tanning, the film’s super-criminal figured out how to engineer an airborne virus set to transmit from Jack to his dad, and from there to a conference housing the world’s top names in drug enforcement. Unfortunately, they didn’t plan for The Transporter (cue metal guitar). His only superhuman competition resides in Lola (Kate Nauta), Gianni’s top goon-lover, who cakes-on the mascara and parades around in lingerie, even when toting two Uzis. Get real lady… cavorting about in a bra and panties when trying to kill someone just isn’t practical. Following a long line of movie villainesses like Famke Janssen in GoldenEye, Lola is part assassin, part sex freak, and does little more for the movie than provide the obligatory “sex appeal.”

Forget suspension of disbelief, a welcomed tool utilized by most action movie junkies. That useful means for viewers to accept the impossible will break down from overuse within the first twenty minutes or so. “You really want to play superhero, huh?” a villain asks Frank. Indeed, his heroics break all laws of gravity and reality. One scene has Frank racing his Audi knowing there’s a bomb attached to the bottom. He hits a jump and we’re to believe he times the car’s spin just right to catch the bomb on a crane hook, which detonates. He then lands the car without a scratch. …Riiiiiight. What happened to those believable, Jackie Chan-like stunts? To making the most of Statham’s lack of dimension? Curious that this film was written by Luc Besson and Robert Mark Kamen, fight choreography arranged by Corey Yuen, and directed by Louis Letterier—the same talents from The Transporter, just in different proportions. It’s curious, because with all the impossible stunts realized with silly computer effects and the script’s copious melodrama, it doesn’t feel the movie takes place in the same universe as its predecessor. Maybe is the title’s lacking “The”.