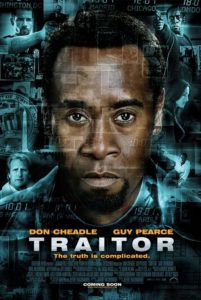 Impartiality and objectivity don’t flow freely in the streams of Hollywood, especially when it comes to themes of geopolitical loyalty and religion. Traitor comes as close as studio films can get, at least in terms of its philosophical message. Contrasting its impressive, even bold notions of humanism reaching beyond idols and borders is the formulaic structure of your typical spy yarn. Bad guys get theirs. Good guys save the day. And yet, there’s an afterthought: What are the limits one should go to pursue good, and after how much killing in the name of good do the means no longer justify the ends?

Luckily there’s a star like Don Cheadle to hold this rumination together with his thoughtful eyes and a pensive brow. He plays the Sudan-born Samir, a devout Muslim who in the first scenes is caught by FBI Agents Clayton (Guy Pearce) and Archer (Neal McDonough) selling detonators to extremists. Refusing to name names, he ends up in a Yemen prison with his would-be buyer Omar (the sadly typecast Saïd Taghmaoui). Samir and Omar form a friendship, which becomes fruitful when Omar’s friends break him out of jail and Samir is brought along. Entered into a realm of top terrorist leaders, he carries out missions commanded by extremists who are curiously uncommitted to the Muslim edicts Samir lives by.

What we learn is that Samir is strictly opposed to terrorism because his religion, despite inconsistent interpretations by those around him, prohibits such actions. Indeed, devout Muslims condemn murder by terrorism or any other means. We see scenes of great spirituality within Samir, clearly blocked or ignored by some external drive of his. What allows him to go along with Omar, construct effective bombs and efficient scenarios for their delivery, even though it’s against his strong religious convictions? Trained in demolition by the American military, Samir is a former Special Op whose black-lined world has suddenly become gray. Perhaps he has turned on his country, leaving him with a profound moral and religious conflict to overcome.

Taking story credit are Steve Martin (yes, that Steve Martin, also serving as executive producer) and writer-director Jeffrey Nachmanoff. Their construction of Samir and casting Cheadle in the role is the film’s greatest benefit. First, Samir’s intentions remain ambiguous, even after we discover he’s an undercover agent reporting to a shifty CIA agent (Jeff Daniels). From Our Man in Havana to The Departed, moviegoers have learned the nasty effects of deep cover, and Samir’s frustrations with both a hypocritical American government and duplicitous terrorist regime battle inside his soul. Cheadle coveys this in a performance yet unrivaled in his career.

These grand ideological stakes make the ensuing scenes of action all the more involving, as the outcome bears consequence beyond simply the hero prevailing. Not something out of the Bourne movies where the spy kills with extreme prejudice in entertaining and quickly edited ways, Nachmanoff constructs his action with implication and uneasy realism. We’re not coddled by an escapist flick that punctuates fight scenes with techno music; the film takes its themes too seriously to feature exploitative violence.

Raising the questions that it does, Traitor doesn’t seek to answer any of them or offer much by way of a resolution. Some audiences may be off-put by such cloudy storytelling. Of course, there are no answers to the film’s questions, either in life or in this occasionally thrilling motion picture. That they’re even asked is worth mention, however. Inserting every argument into the opposing characters’ inner and outward struggles, the resulting film feels conversational without being preachy, meaningful without removing us from the ongoing plot. What’s more, it doesn’t pretend to work out happily in the end, only as happy as it could, given the circumstances.