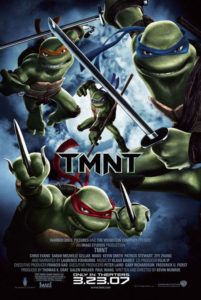 In the mid-1990s, the Teenage Mutant Ninja Turtles (after three live action movies, several comic book incarnations, a popular line of action figures, ten years worth of various animated series, and even a concert tour called “Coming Out of Their Shells”) and their Turtle Power petered out. The franchise was nearly dead. But with the recent nostalgia-driven trend in film (a Transformers movie is due out this summer; rumors of a G.I. Joe movie are all over the internet), writer and director Kevin Munroe saw fit to reinvigorate the series with TMNT, a darker-looking, computer animated representation of the anthropomorphized, pizza-loving mutant reptiles. Every superhero has his or her archenemy. Batman has the Joker. The X-Men have Magneto. Superman has Lex Luthor. And the Ninja Turtles have Shredder. Kevin Munroe apparently forgot that most audiences, even if they’re barely aware of the series, still know of Shredder’s futile but persistent, not to mention gristly-voiced attempts at taking over the world. For the first two live action movies and most of the cartoon series, the turtles fought the multi-bladed evil ninja.

Munroe begins TMNT with introductory narration, read by actor Lawrence Fishburne; here, we find out the turtles defeated Shredder long ago, and that the film is actually about a 3,000-year-old curse having something to do with thirteen monsters, stone generals, and Patrick Stewart’s voicework. Munroe’s new villain(s) are as inconsistent, absurd, and boring as the rest of his film. The villains are too many and too forgettable to consider interesting. Even a talking brain from Dimension X would have sufficed—anything to make us care about why the turtles were fighting. Instead, the incomprehensible conflict in the movie did nothing more than make me want to revisit the television show on DVD. I realize looking for logic in a movie about mutant ninja turtles is pointless, but at least the cartoon series always had a particular form it stuck to: Mutants created by the mysterious “ooze” fight ninja clans, other mutants, and a mixture of evils in New York City. The television series, as silly as it could be, outdoes Munroe’s movie in every narrative respect.

The four turtles remain the same in TMNT, but the human characters change. April O’Neil, the plucky reporter the turtles were always rescuing in the cartoon and previous movies, is now a ninja-in-training and even joins them in the end battle. While it’s nice to see a woman rise beyond the typical damsel-in-distress role, she was originally written as the device by which the turtles would jump into action, and she probably should have stayed that way. Casey Jones, originally a tough-guy vigilante who served justice with a hockey mask and a baseball bat, in Munroe’s film, is coupled to O’Neil and concerns himself more with comic relief and relationship problems than with kicking butt.

The CG animation stands out in a few scenes, but it’s otherwise distractingly bad when considering other quality animation work that’s out there. One fight sequence between Leonardo (the turtle with swords) and Raphael (the turtle with sias) on a rainy rooftop looked impressive. The remaining action scenes were too fast to see any action, and they seemed orchestrated like a video game—the heroes fight the smaller villains at first, then work their way up to larger bosses. The turtles themselves were animated well, but every human looked like a mutant (Casey Jones has a head shaped like a piece of candy-corn), making we wonder why the turtles were the ones living in the sewer.

The humor in the film was so unfunny that I began to feel physical pain whenever a joke was uttered. Michelangelo jibes, “Did anyone get the license plate of that thing that hit us last night? It looked like your mom, dude!” Since when do the Ninja Turtles have moms? Though there was the occasional chuckle, not even the children in the screening I attended laughed at that one. Adults will have even less to enjoy, as there’s nothing for anyone older than five in TMNT. Near the end of the film, Munroe writes in several references to Shredder, suggesting that he is alive and will be back, setting TMNT up for a sequel. With a total of about five or six references to Shredder throughout, Munroe knows his audience aches to see the turtles face up against their archnemesis. So why not include Shredder in this movie? Instead, we have poorly realized villains, insufferable humor, and a description that seems distant from the Teenage Mutant Ninja Turtles universe we’ve known since the 1980s-1990s. This was a pitiful and clumsy attempt to reinvigorate audiences with Turtle Power. In every way, it failed to capture the lovable characters from yesteryear or successfully rethink them for a new generation.