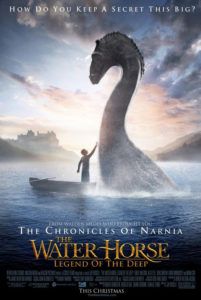 The Water Horse comes from Dick King-Smith, the English novelist behind Babe. He’s an imaginative storyteller that requires his readers/viewers to have equal imagination. It’s rare for children’s movies to require imagination, actually. Usually, the CGI critters do all the thinking for us. But here we’re required to believe: first, in the possibility of myth-come-true; second, that the realization of this myth could be so damn cute.

In the first scenes, we’re drawn into a tall tale by a Scotsman in a pub (always a reliable source), who tells the “true” story of the Loch Ness monster’s famous photograph—the shadowy, indistinguishable one we’ve all seen. The storyteller is played by Brian Cox, who leans in close to a pair of American tourists listening to his yarn, and takes us back to WWII, where we meet our hero, the young Angus MacMorrow (Alex Etel).

Angus’ father is off fighting in the war; only his mother Anne (Emily Watson) and sister Kristie (Priyanka Xi) live with Angus on the Scottish countryside (though it was beautifully shot in New Zealand), leaving the boy mostly to himself. When he finds what’s later determined to be an egg in a tide pool, the curious object gets his full attention. The egg hatches, releasing a wrinkly, hairless cross between a puppy and a dolphin, with just as much cuteness as personality. Angus, keeping it a secret, names the creature Crusoe (as in Robinson) and begins feeding and nurturing it. The creature all but proclaims “Mama”, latching onto Angus with its endearing sense of loyalty.

All at once the stuffy Captain Hamilton (David Morrissey) carts in his regiment of Scottish troops to make camp on the MacMorrow property, guarding what he calls “the front lines” of the war. For some reason, he believes Loch Ness is a vital entry point for German subs… Everyone in the film laughs at his idea too. He and his fellow close-minded military men don’t believe in such nonsense like water horses; in children’s movies, these types are always the antagonists.

Mirroring his own maligned father-son situation, Angus goes to great lengths to raise his adopted child, feeding him potatoes, even garbage to keep its hunger pains quieted. Little does the boy know that Crusoe will grow double its size overnight, even just after a meal, making a pail of water or the bathtub certainly too small to accommodate. It’s a secret that can’t be kept long; soon his sister and the handyman Lewis Mowbray (Ben Chaplin) are keeping hush-hush about Angus’ creature. And so off to Loch Ness it goes, beginning one of the great Cryptozoological myths of our time (though I doubt the backstories for Bigfoot or El Chupacabra or the Jersey Devil would be so endearing).

Most impressive in director Jay Russell’s film is that a fully realized CGI character manages to be charming without a celebrity voice or abundant pop-culture references. From the water horse’s rambunctious beginnings to its later period where Angus rides on its back about Loch Ness, we’re dealing with a fleshed-out character, as lovable as White Fang or Chewbacca. Working with screenwriter Robert Nelson Jacobs (Flushed Away, Chocolat), Russell (also director of My Dog Skip) enters familiar-yet-pleasing Spielbergian territory, where a child opens the eyes of skeptic adults, thus allowing inner children to flourish.

The human actors speak volumes as well, with performers like Emily Watson and Brian Cox upping the ante from your traditional kids’ flick. But the real star is Alex Etel, an incredibly talented young actor whose thus-far limited filmography (his only other film role was in Danny Boyle’s delightful Millions), I hope, will grow as he does. His freckled face and absolute sincerity made this movie, whereas another child actor might have made it sappy and forced. Here is a movie with class and creativity and the kind of imagination that all kids should have. Reflecting on The Water Horse, after remembering that Alvin and the Chipmunks was released a few weeks back, I appreciate it all the more. It doesn’t sell out, the effects by Weta “The Lord of the Rings” Digital are superior, and it remains entertaining for any age. In a year where kids’ movies have stooped to abysmal lows, this one gets it right.