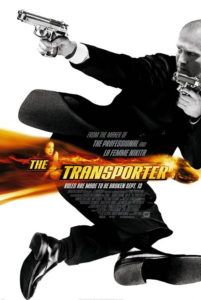 In the realm of cheesy action movies, The Transporter (2002) is a pretty good one. Production value is high. Pace never slows. Running time is short. And it has all that action flick junkies could hope for: impossible stunts, car chases set to thumping music, and elaborately choreographed martial arts fisticuffs—all that, without any pesky character development getting in the way. Jason Statham stars as Frank Martin, fresh off his Guy Richie beginnings in Lock, Stock, and Two Smoking Barrels and Snatch, but before his days in the abysmal dullness of Crank and In the Name of the King: A Dungeon Siege Tale. Frank runs a private delivery service for special needs clients, and by “special needs” I don’t mean they wear adult diapers. In a black souped-up BMW, he drives from Point A to Point B without questioning his cargo, which works well for his largely criminal clientele. A former British Special Forces soldier, he’s since retired with his skills and become a quiet loner, which is a good thing, because it means we don’t have to endure any typical, cringe-inducing action movie one-liners while he lets loose on those unfortunate enough to get in his way.

Following a tired movie cliché, he lives by his own set of rules, which he recites in the movie enough times for me to remember by heart for writing this review: 1) Never alter the deal, 2) No names, and 3) Never look in the package. For example, in the first scenes, our amoral hero picks up robbers from a bank heist, but they’ve broken Rule Number One and arrived in his getaway car with four people instead of the agreed-upon three. He waits until the robbers execute one among themselves before he revs-up to elude the police (in an expert chase scene, comparable to those in The Bourne Identity, filmed on narrow European streets). Nevertheless, the film’s tagline is “Rules are meant to be broken,” so you can be sure Frank’s rules inevitably become obsolete as the story progresses.

Not that it matters once the roughhousing begins, but the plot involves seedy Euro-trash gangsters hiring Frank to deliver a parcel. When he hears it rumbling in his trunk, he breaks his own Rule Number Three and looks in the package, discovering there’s a young woman bound and gagged in the duffel bag. He does the sensible thing: feeds her some orange juice, and then delivers her as planned. Alas, his gesture makes him late, and said gangsters resolve to make his car go boom. Don’t they know not to mess with his car?

Frank lights a blaze of punishing retribution on the bad guys, in the process wrangling himself the aforesaid girl, Lai (Shu Qi), who he quickly conquers with all his manliness. Curious thing about his manliness, though, fight choreographer-turned-director Corey Yuen arranges some inspired-by-Jackie Chan battles, some of them crossing the homoerotic border. Take the sequence where he dukes it out with goons in an auto shop: Mid-roughhousing, the shirtless Frank dumps canisters of motor oil onto the floor and proceeds to roll around in the slick with his combatants. Not that we’d ever question Frank’s sexuality, as there will always be a girl for his kind to master after destroying the opposition.

Luc Besson, who used to direct wowing action films like Léon: The Professional, serves as producer and co-writer (along with Robert Mark Kamen). He’s mildly preoccupied with yarns involving a hard-hitting man-hero protecting a vulnerable female. Even in his stories where the female is likewise endowed with the ability to kick butt (La Femme Nikita, The Fifth Element), she’s depicted as incomplete or weak somehow until she’s “saved” by a man. Such a concept is problematic, even if it is traditional storytelling. What about those dainty men that need saving by a strapping heroine? Where are their stories? Normally, I’d be split on a film like this—the joys of its raw entertainment value vs. the lack of story backing it up. Given Besson’s penchant for bold setups, future director of The Incredible Hulk Louis Letterier handling the “artistic direction”, and Yuen’s bravado fight composition, all played out with Statham in one of his few likable roles, the result is a mindless delight. Indeed, I feel sort of ashamed for liking The Transporter as much as I did, but I suppose that’s why they’re called guilty pleasures.