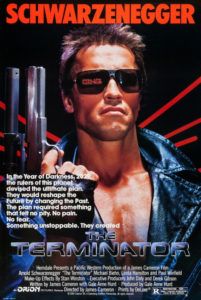 James Cameron’s first foray into his career-long obsession with heavy tech and relentless pacing arrived in 1984 with The Terminator, an impressive if brutal actioner date-stamped by its 1980s production. Filled with striking special FX and a superstar-making role for Arnold Schwarzenegger, Cameron’s intense momentum sustains the film today, even after countless viewings and its since-overexposed cultural saturation. The film works today on a level of oddity and nostalgia more than sheer entertainment value, operating as a sharp B-movie plot with A-list visuals. There’s no denying that upon its release, the film looked better than most thanks to Stan Winston’s wonderful robot design and some neat miniature work to create grim visions of its apocalyptic, machine-dominated future. Nor can one deny that Schwarzenegger makes his most iconic onscreen appearance, saying the line that he’d fall back on for, well, ever. And writer-director James Cameron starts a career that only gets bigger and more impressive as it continues. Indeed, The Terminator is a landmark. But upon revisitation, the material fails to be much more than a product of its time—rather than timeless—despite the franchise’s ongoing popularity.

Cameron’s scenario involves a cybernetic organism called a Terminator (Schwarzenegger) traveling back in time from the machine-ruled future of 2029, to 1984, where it hunts and kills women named Sarah Connor, hoping to find the mother of John Connor, the rebel leader of its time. The correct Sarah Connor (Linda Hamilton) is saved by a human soldier named Reese (Michael Biehn), also sent from the future, by Sarah’s future son no less, to protect her from the Terminator. Several unyielding chases and shootouts lead to Reese and Sarah being captured by the police. With Sarah under protection, she’s gradually convinced that Reese is crazy, paranoid and delusional; the Terminator’s impossibly sustained injuries are explained away as “body armor” and “PCP”. Just then, the Terminator launches an attack on Police Headquarters, kills dozens, and starts the chase once more. Sarah and Reese barely escape with their lives and begin to talk about the bleak future. After hearing Reese’s stories about his difficult post-armageddon lifestyle, wherein he confesses he’s a virgin, Sarah and Reese end up in bed, and the result is the future’s savior. In the finale, Reese dies trying to stop the Terminator, and Sarah crushes the thing in a factory press, surviving with the knowledge that her unborn son will lead humanity after Judgment Day. 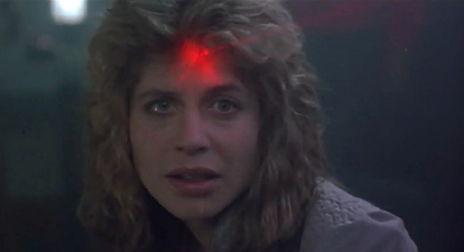 But you know all this, don’t you? You’ve seen the movie, probably more than once, and looking back on it, maybe you’re like me and you find it just doesn’t work anymore, and perhaps never did. The entire Terminator franchise is based on a time travel paradox. Let me explain: How could there have been a John Connor to send Reese back in time if Reese was indeed his father? Consider time like a straight line moving forward. As the line progresses, Sarah Connor gives birth to her son John and he grows up to lead the human rebellion against the machines of the evil computer Skynet. The timeline loops back when John sends Reese into the past to protect his mother, and the straight line becomes a circle. But before it could become a loop, it had to be a straight line. Understand? So, by this logic, someone must have impregnated Sarah on the original timeline strain to create John in the first place, because without him, Reese would have never been sent back. Who is this other guy? We never know.  He must exist, however, because without him, the wishy-washy science Cameron suggests just doesn’t cut it. But then, maybe I’m wrong. After all, that’s why they call it a temporal paradox. Getting hung up on such ideas isn’t the point, however; The Terminator is about thin ideas and heavy action.

Cameron, then an unknown whose only legitimate directorial credit was Piranha II: The Spawning, devised his concept from two Harlan Ellison-penned episodes of The Outer Limits called “Soldier” and “Demon with a Glass Hand”. Apparently, he also had a fever dream that inspired the image of the Terminator. Wanting to break into Hollywood, he initially saw the concept as a slasher-esque setup, inspired by John Carptenter’s low-budget breakthrough with Halloween (1979). Cameron’s film would be a tried-and-true action movie, no matter how much he wanted to embrace Ellison’s brand of science-fiction. To be sure, Cameron’s influences extend beyond Ellison and Carpenter, reaching into The Road Warrior (1981) for the film’s fast-paced car chases. After all, the director has always been better at big and noisy and explosive, versus exploring scientific concepts in much detail. He works in clichés and heavy artillery to create his own brand of actionized entertainment. Just watch Aliens (1986) or True Lies (1994); these are movies with the potential for smarts that are instead reduced to formula—albeit expertly implemented formula—no matter how visually or technically innovative they may be. His films are exceptional diversions that typically engage the senses far more than the mind. His rare diversions from this approach are Titanic (1997), his Director’s Cut of The Abyss (1989, his best and most undervalued work), and arguably Avatar (2009). 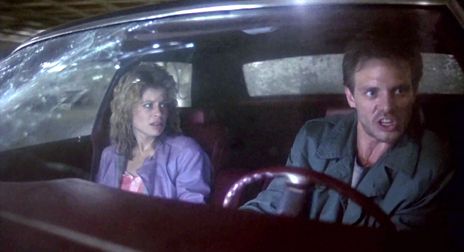 Cameron showed his script Roger Corman’s assistant Gale Anne Hurd, who had worked with Cameron at New World Pictures. She agreed to produce and provided crucial feedback on the original script, earning her a co-writer credit. With a budget of $4 million provided by John Daly at Hemdale Pictures, Orion Pictures planned to distribute. Casting the film did not come easily. Cameron originally saw the Terminators as inconspicuous in shape, making it easier to blend in and infiltrate their targets; in fact, he wanted actor Lance Henriksen in the title role, who instead was cast as a detective when Schwarzenegger signed on. Schwarzenegger’s bulk seemed a more naturally intimidating choice, which is curious because Mr. Schwarzenegger’s acting and mere presence could be called conspicuous. Why, for example, would the machines design a cyborg with an Austrian accent? To confuse the enemy with its bad pronunciation? Within the movie, it hardly matters, since anyone with the potential of realizing the Terminator is actually a cyborg is filled with a barrage of bullets, or deemed crazy, before the machine’s identity is revealed. Then again, looking for logic in a 1980s action movie is like fighting a Terminator with a Nerf gun.

When The Terminator was released, critics largely praised Cameron’s work as virtuoso filmmaking over a B-movie veneer. Richard Corliss of Time magazine placed it on his Top 10 list for 1984. The Los Angeles Times praised its “clever special effects and sly humor”. Audiences consumed the ultra-violent, R-rated proceedings, earning the film $78 million at the box-office. Years later, critic and historian Richard Schickel quite accurately described it in the pages of Entertainment Weekly: “What originally seemed a somewhat inflated, if generous and energetic, big picture, now seems quite a good little film.” Today, Cameron’s Terminator franchise remains one of the most dated in the history of blockbusters. Each film’s era can be identified by the oodles of pop-culture poured into the backdrop. Look at Hamilton’s shaggy dog hairdo, which serves as better evidence for the film’s year of origin than carbon dating could provide. Or the mohawk-laden punks the Terminator wipes out when he first arrives in 1984, among them a young Bill Paxton. And in the hipster nightclub called “Tech Noir” where Sarah Connor hides out from her tail, the slow-motion ‘80s dancing gyrates like a bad music video. A product of its time in the worst possible way, revisiting this action flick is an exercise in time travel itself. 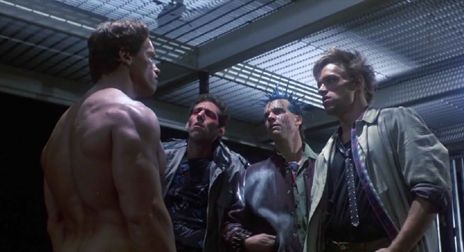 Some celebrated elements about the film remain a mystery to this critic, ranging from how fans blindly accept the afore-discussed temporal paradox to Schwarzenegger’s resultant celebrity. Indeed, looking back, there are many questions. Why did Schwarzenegger’s career take off from this launchpad and not Biehn’s? After all, Biehn plays the sympathetic hero and displays wild ferocity, whereas Schwarzenegger is static and unappealing. Cameron would use Biehn twice more on Aliens and The Abyss, both with incredible results; still, he’s forgotten today in favor of Schwarzenegger’s robo-acting. And what is it about the line “I’ll be back” that stuck with people? Within the story it’s rather inconsequential, leading to the Terminator driving a car into a police station. Is that all it takes to build a Hollywood career, not to mention a political station as California’s governor? Audiences’ blind enthusiasm for The Terminator, and their willingness to propel Schwarzenegger into superstardom, baffles me like few other successes have. But alas, there’s no changing the past. At least not in reality.

Unfortunately, the dated quality of Cameron’s Terminator films is not dealt with ironically. Each entry takes place in its contemporary setting (i.e. a 1984 movie set in 1984), without need to recreate a known era from the past. Its representation of 1984 is honest rather than sardonic. Only the ruinous, post-apocalyptic future has been fabricated for us. For the most part, Cameron avoids “fish out of water” humor (aside from a bit where Schwarzenegger asks for a laser gun from local gun show owner Dick Miller). He’s not interested in ironic humor, at least not in the first film, or exploring how time-travelers adjust to their new setting. Playing with the dynamics of time-travel is not Cameron’s intent, either. When Reese tries to explain how it works, Sarah simply says the concepts make her head spin, and it’s not explored further. The Terminator would rather explore the realm of unyielding, mindless entertainment. This could be considered a lesser motivation, of course, but it’s handled so well that any disappointment over the film not being smarter is somewhat unjustified. Drift off into the sound of gunfire and Cameron’s breathless action, and you might have a good time, but only if time is something you’re willing to disregard—meaning the misused time travel contrivance, the time you’ll put into this viewing experience, and the era of its creation. Ignore these details, and there’s plenty to savor in terms of visceral action cinema.