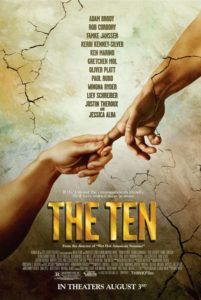 It’s impossible to know if Moses intended “Thou Shall Not Covet Thy Neighbor’s Wife” be applicable to prison bitches. If you see a man in prison that you want to rape, but he’s already being raped regularly be another inmate, is it wrong to long for him? Or should you just rape away without consequence? Is there etiquette to prison sodomy?

Comedy players from MTV’s The State, comedy central’s Stella and Reno: 911!, and the film Wet Hot American Summer, masters of improvisational and nonsensical humor, have gathered to create The Ten, a satirical look at Christianity’s Ten Commandments in the vein of Woody Allen’s Everything You Always Wanted to Know About Sex *But Were Afraid to Ask. They attempt to answer the above questions, as well as other modern-day applications for the Commandments, with ten short segments, one for each law.

Each segment offers a hilarious, seemingly off-the-cuff approach to its respective topic. Take the “Thou Shall Not Say the Lord’s Name in Vain” segment that features Gretchen Mol as a thirty-something virgin librarian. She takes a vacation to Mexico where she receives a “spiritual and vaginal” awakening from Jesus, a local carpenter. Only it’s pronounced “gee-zuss” and not “hey-sous” like you’d imagine. Played out with intentional similarity to the likewise sexually-charged Mexican film Y tu mamá también, Mol’s character discovers her newfound foreign lover is, in fact, Jesus Christ reborn. Only Christ is putting off Judgment Day for a series of sexual relationships.

Another Commandment’s explication involves two neighbors played by Liev Schreiber and Joe Lo Truglio. Schreiber’s character notices his neighbor has ordered a CAT scan machine; now he wants his own CAT scan machine. Not to be shown up, Truglio’s character orders another. Both keep ordering and ordering CAT scan machines until, eventually, their wives leave them and their homes are filled to the brim with the clunky white mechanisms.

Tying them all together are pointless, non-introductory introductions from comedian Paul Rudd. He stands in a black void with two large Commandment tablets behind him. But rather than giving any kind of foreword, his relationship woes with his wife (Famke Janssen) and his perky mistress (Jessica Alba) are meaninglessly acted out. Since we’re already dealing with fragmented skits, Rudd’s inexplicably useless host duties suck out the laughter between each Commandment sketch. Furthermore, the film ends on an incredibly low note, as a stupid song sums up the stories—as if it’s impossible for us to remember the last ninety minutes of the movie.

A handful of characters is repeated, such as Dr. Richie (Ken Marino), who’s thrown in jail for killing a patient as a “goof.” Or there’s Winona Ryder’s character that goes from being a distraught fiancée, to an overpowering newlywed, and finally to fetish-crazed for a ventriloquist dummy. Besides those examples, there’s very little interconnectedness between Commandment stories. The Ten feels like a marathon of your favorite sketch comedy program. And I for one don’t want to bring the experience of television into the movie theater (remember Ed TV?)

I laughed a lot during The Ten. But some segments are funnier than others, and since together they lack a contingent flow, the movie never sucks us in. It seems like the creators were battling between concept and content. Concept ultimately lost the fight, since Rudd’s host duties and the ending song show us the writers didn’t know how to suitably link the ten stories in a significant way. Perhaps if each story simply flowed from one to the next, like an episode of Upright Citizens Brigade or Stella, I might have enjoyed the random humor all the more. As is, the movie tries to relate all Commandments in a common way, unfortunately failing to make a structured, complete movie despite its constant stream of laughs.