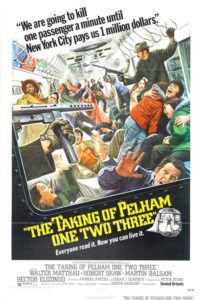 Remember the days when movie terrorists could still be American? The Taking of Pelham One Two Three harkens back to that era, circa 1974, complete with all the cinematic signifiers of its pre-Giuliani New York City setting. The prototypical New Yorker arrogance and citywide squalor are firmly in place. The film stock bears that marked 1970s fuzz about the frame. Racist and sexist remarks are present not for irony’s sake, but because that was the time. And the villains are described as “terrorists” because that’s what they are, not because post-9/11 Hollywood finds it easier to paint those with darker skin color as the bad guys.

Riddled with characteristic New York-isms, the film’s NYC comes dirty and crime-ridden, its population radiating that edgy attitude absent from contemporary pictures set there (modern movies are so desperate to retain its superficial “greatest city in the world” title). Not one aspect of the city is glorified; crime and filth seem abundant everywhere, which enhances the dramatic potential of the urban sprawl. Significantly changing the popular 1973 novel by John Godey, Peter Stone (Charade) adapted the screenplay for longtime television director Joseph Sargent into a mild commentary on the inefficiency of New York City officialdom.

Marketed via the reputation of the book, its advertisements proclaimed, “Everyone read it. Now you can live it.” This dated yarn follows subway hijackers ransoming passengers for $1 million, and they give the city only 60 minutes to deliver the green. Donning trench coats, glasses, and phony moustaches, each hijacker also hides their appearance with fake names: the Limey mastermind Mr. Blue (Robert Shaw); the ex-subway operator Mr. Green (Martin Balsam); the troublemaker Mr. Gray (Hector Elizondo); and the bland one Mr. Brown (Earl Hindman)—names that would later help inspire Tarantino’s Reservoir Dogs.Pitted against them is sarcastic Transit Authority cop Lt. Garber (Walter Matthau), who seems to be the only official person in NYC with any sense about him. The Mayor in charge of approving the ransom payment is one of those horrid movie stereotypes that can only be watched mockingly today, completely incompetent and

Pitted against them is sarcastic Transit Authority cop Lt. Garber (Walter Matthau), who seems to be the only official person in NYC with any sense about him. The Mayor in charge of approving the ransom payment is one of those horrid movie stereotypes that can only be watched mockingly today, completely incompetent and ever preoccupied with the voters. Lee Wallace plays The Mayor sick in bed, sniveling like a child with a runny nose, seemingly incapable of making an executive decision without his top aid (Tony Roberts) who’s “trying to run a city, not a democracy.” But then everyone from the politicians to subway traffic control behaves as if personally and professionally fixed to The System. Inept supervisor Frank (Dick O’Neill) couldn’t care less about the hostages’ lives; he’s more concerned about getting the lines moving again, earning himself a much-needed punch-out from Garber.

It’s unclear if Shaw’s character takes advantage of New York’s bureaucracy or becomes its victim in the end. He’s clearly no native New Yorker, as Garber points out: “He’s got a heavy English accent. Could be a fruitcake.” Early scenes where The Mayor and the NYPD are scrambling to get the payoff together show Shaw’s deadlines lapsing from disorganization, yet later the smarts of one New Yorker (Garber, of course) help nab the crooks. The cynical movie makes a fine point-counterpoint discussion about the potential disorganization inherent to big city operations, with the steady, jazzy-yet-procedural music by David Shire scoring the ensuing technical way the whole scenario unfolds.

It’s all rather emotionless. None of the characters are illustrated beyond their most functional description. There’s no suggestion of background or motivation. Structured around the recitation of circumstances, the film is never more than a series of events. The single thrilling moment involves the countdown when The City has only minutes to deliver the ransom before the hijackers begin killing hostages; suddenly the carrying squad car en route crashes, leaving viewers with an incredible sense of dread. But what about the rest of the film? Who are any of these characters? What are Mr. Blue’s motives beyond the money, if any? Why is Garber apparently the only man in NYC sporting common sense? None of these questions are answered.

Unforgivably basic, what little character hints that exist in the script are centered in chummy forms of racism and sexism. Conducting a tour for photo-happy Japanese businessmen in the first scenes, Garber insists on calling them “Chinamen” and insults them to their faces, believing they speak no English, but of course, they do. During the subway incident, Garber expresses concern for the life of the plainclothes cop onboard the hijacked car, because one cop against four crooks will have no chance, “Especially if it’s a dame.” Later, Garber seems shocked that the Inspector he’s been communicating with via radio is African-American because an officer of the Inspector’s stature couldn’t be black, could he? These none-too-subtle touches of bigotry don’t come off as tongue-in-cheek or self-aware, just as indefensible expressions of the period.

Awarded BAFTA nominations for Shire’s score and Balsam’s acting, The Taking of Pelham One Two Three’s ongoing celebration remains inexplicable, as time has not been kind to this film. Perhaps nostalgia maintains its reputation, perpetuated by pop-culture references and remakes (one for TV in 1998; the other by director Tony Scott in 2009). Watching Sargent’s film today requires much by way of merciful viewership, forgiving the picture of its unfashionable prejudices and the standardization of this kind of plot since its release. Balsam and Matthau and Shaw give impressive performances, as they always do, but the entire production erected around them reeks with a 1970s stain that simply doesn’t hold up today.