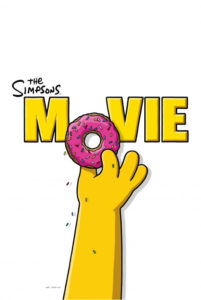 Why, after nearly two decades of devoted following and unparalleled popularity, have producers of The Simpsons finally decided to make a movie? South Park creators went the feature film route after only two years on the air, and The X-Files waited five years—both at their respective heights of popularity. Devout fans know creator Matt Groening and producer James L. Brooks have been pushing for a film since the series’ inception. Belated or not, it’s finally here: The Simpsons Movie. My concerns beforehand were the same as they were for South Park: Bigger, Longer, and Uncut. Namely, what can a cartoon movie do that a cartoon television show cannot? South Park assured that its movie would break limits of profanity, which it did; it also went the unexpected (yet welcomed) movie musical route. The Simpsons Movie is not a musical, it doesn’t contain bucketloads of four-letter words, but, like the South Park movie, we do see a cartoon penis—Bart’s, to be exact.

The Simpsons began in 1989, birthing a cultural phenomenon unmatched for animation, making it the longest running comedy program on television just after Saturday Night Live—certainly the longest-running animated series ever. While it’s had many copycats such as Family Dog, Fish Police, Futurama, Family Guy, and American Dad, none have done what for a time made The Simpsons brilliant. As an extension of The Flintstones or The Honeymooners method, the show has spawned nineteen seasons at this point, the last six or seven of which have been below par. What once made the show great has waned. I refer to its ability to combine high and low culture through reference. A single episode in its first thirteen or so years might have contained references to classic literature amidst abjection, or spoofed history in a humorous way. This opened up its demographic to almost anyone, as every group is scrutinized and made fun of, regardless of religion, politics, race, or creed. It offends everyone, so really no one can actually be offended—it’s universal. Think of the reoccurring Simpsons character Gil, a shoddy salesman who can’t catch a break; how could this not be based on the character Shelley Levene from David Mamet’s Pulitzer Prize-winning play, Glengarry Glen Ross?

The Simpsons’ post-modern approach was perfectly attuned for young, old, uneducated, or educated audiences, since Harvard grads like Conan O’Brien were writing a number of episodes, subtly infusing each with post-modern humor. Alas, the past six or so seasons have refused to continue that tradition, narrowing their demographic to younger viewers. Sex, drugs, and potty-humored jokes have become prevalent over scholarly or satirical reference. The Simpsons has become hip. This is forgivable, as with the onset of dangerously popular competition such as the equally reference-laden show Family Guy and the like, The Simpsons has had to gather younger audiences to build (or rebuild) its base. And while The Simpsons Movie embraces the show’s tropes, it also points out the pointlessness of there being a movie. Homer even calls us “suckers” for paying for what we could’ve gotten free on television. Very true, and the more I think about it, the more I was a little upset that there was no grandiose movie-specific magic signifying a jump for The Simpsons from TV to film.

The subtle pro-environmentalist plot centers on a dome being placed over Springfield (state undetermined), to enclose the pollution-ridden town from the rest of the world, a project spearheaded by EPA nut Russ Cargill (voiced by Albert Brooks, who voiced one of the best characters from The Simpsons show, a James Bond-esque villain named Hank Scorpio who had a surprisingly practical, stress-free lifestyle, with good benefits). I recall episodes similar to this plot: when Mr. Burns tries to blot out the sun and his attempted assassination follows, or when Homer exposes the secrets of Springfield’s residents only to be kidnapped by the government for being too dangerous, or the aforementioned Scorpio story—any one of these plots could be extended into a feature, and each would be more impressive than the one here. At a mere 87-minute running time, The Simpsons Movie drags in the last half hour. We’re used to consuming a 22-minute whole per episode; the movie is four times that, and by the end, it pretends like the plot matters, when any Simpsons fan knows plot doesn’t drive the show’s appeal. It’s those random, hidden jokes only seen by those in the audience with a quick eye for reading small print.

Gags aren’t thrust in our face like many commercial comedies; The Simpsons Movie retains the show’s multi-layered attack on comedy. It expects that we’re attentive, willing to observe, and (god forbid) even willing read during the film. One such joke involves an advertisement for Fox programming running across the bottom of the screen, admitting that, yes, Fox is even advertising within movies now. I’ve always loved the show’s somehow misplaced references to high art on the scale of A Clockwork Orange or Les Misérables, which here are replaced with Spider-Man and Harry Potter nods for the commercial crowds. There’s no room for allusions to material 90% of the crowd doesn’t understand anymore (which, as mentioned, is the problem with the show currently). Youth appeal is the movie’s approach; it also succeeds in pleasing die-hard fans of the series.

However unspectacular the transition from TV to film may be, and however much it relies on the show’s formula (in its own way both a positive and a negative feature), you can be sure that nothing in The Simpsons Movie will carry over to the show. Consistency remains the show’s appeal. No one gets older. Rarely do characters die or change from episode to episode. And you can watch any one episode and know everything about these characters—so you can be assured that this movie won’t make much of a difference, and come later this year, a new season will begin, making us laugh to no end, as the show has done for the last eighteen years.