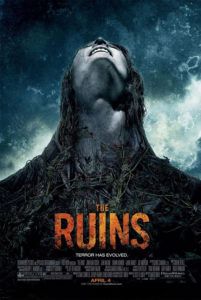 The Ruins surprises because it’s not a typically ideal message horror film laden with societal or political critiques, conducive to horror masters like John Carpenter, David Cronenberg, and George A. Romero. Lacking any resonate meaning, the film simply aims to entertain with escapist horror thrills. Usually, this indicates silly garbage waved off by critics and audiences alike. But here is a grueling film that, through shocking us, continues to keep us involved, either by substantial character development or unexpected and frightening situations.

Based on the second novel by two-time author Scott B. Smith, writer of A Simple Plan (which Sam Raimi adapted into a thoughtful film in 1998), the story begins like any other horror movie: vacationing twentysomethings looking for adventure. In Mexico, two American couples find themselves on a trek out to a Mayan temple not on the maps. All four characters are fleshed out by the film’s natural dialogue, adapted for the screen by the author himself. Jeff (Jonathan Tucker) and Amy (Jena Malone) are distant, as she’s none-too-happy that he’s going back to medical school soon. Eric (Shawn Ashmore) and Stacy (Laura Ramsey) are a naturally cheery and affectionate couple.

The quartet makes friends with German fellow tourist Mathias (Joe Anderson, from Across the Universe), who knows of an archeological investigation that peaks their interest, in a holiday otherwise exclusively reserved for tequila. Mathias, with his friend Dimitri (Dimitri Baveas), invites the Americans along to the site, as his brother was due back some time ago but never showed. Deep in the woods resides their destination: an ancient temple, covered in foliage, surrounded by a clearing of dead earth. As our six vacationers approach the temple, all at once locals speaking Mayan surround them, shouting in a foreign tongue, pointing guns and arrows in their direction. Someone is killed from the misunderstanding, forcing our five remaining vacationers up the temple stairs. More and more native inhabitants emerge from the woods, surrounding the temple, setting up camp, and refusing to allow our protagonists leave. Trapped by murderous locals, our heroes discover a much worse fate than a gunshot or bow’s arrow atop the temple…

First-time feature director Carter Smith keeps the action from here on out claustrophobic, restricted to the vine-covered temple and its dark interior, all curiously guarded by the band below. The five remaining tourists soon learn that the locals have quarantined them, or rather the bloodthirsty, conscious vines our heroes have been exposed to. Moving with eerie rustles and hisses, the vines begin attacking the group of tourists, working their way inside open wounds, causing squirm-inducing graphic imagery that gets more and more horrific as the film goes on. I’ve made my feelings on this subgenre clear in previous reviews (notably Turistas), because I see potential in what I call “fly in the spider’s web” horror movies, even when everyone relies on the same formula: Vacationing or traveling victims walk unsuspectingly into the trap of some psycho(s), usually after offending locals, and are subsequently killed one by one in true body-count flick style. Whereas today’s cookie-cutter horror factory cranks out redundant stories using this blueprint (The Hills Have Eyes, Hostel, and so on), past films like Deliverance and Psycho have proven the setup can be effective.

We’re usually bombarded with the same drunken college kids having sex, acting stupid, and eventually getting torn to shreds by way of pervasive blood and gore. Few films thrive while occupying those traits; The Ruins is one of them. I like how the story limits the action to a relatively restricted space, and yet keeps the audience involved, frequently shifting in our seats as a result. I like how the actors are tangible beyond your typical horror flick dudes and bimbos, elevating the material with their above-average horror-yarn performances.

My only quibble concerns the abrupt ending, which I won’t reveal here. The resolution in the final frames comes seemingly within the second act, leaving us craving an (expanded) third act that we’re denied. And while the satisfying-enough conclusion brings reasonable closure to the action, we’re still asking questions that, if answered, could have heightened the film’s credibility all the further. What about these vines: How do they die, what myths (if any) explain them, and why doesn’t the local population just burn down the temple? Instead, the problem is reduced to a small survival story for our victims—which is both a positive and a negative for this picture.

We can imagine Carter Smith’s film being much more, or even much less with its potentially silly concept. Regardless, the product remains a tidy and relentless white-knuckle outing. I haven’t twisted and turned in my seat this much in some time, as the bodily gore is handled in such a way that doesn’t glorify the bloodshed, rather strips away at the body like a disease, making the viewer feel every wound or incision. Horror movies rarely penetrate into the viewer as deep as this, inhabiting familiar schemes while totally transcending them with something supernatural. Given that there’s no social commentary or grand message behind The Ruins, the experience may leave you vacant, but entertained enough that you’re not scoffing at, instead wholly involved in, the expertly described terror onscreen.