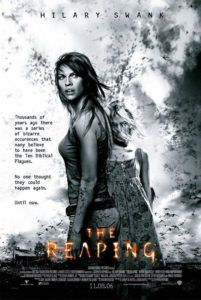 Just in time to put the fear of God back into Christian filmgoers on Good Friday, The Reaping fills Easter baskets with religious mysticism-turned-horror-movie stereotype. Frankly, I’d rather eat Peeps. Director Stephen Hopkins (Blown Away, Lost in Space) starts his promising movie with two-time Oscar winner Hilary Swank as Katherine Winter, a former missionary who has lost her faith. She now works as a college professor and researcher, dispelling what religious fanatics call miracles. In the opening scenes, a tomb in a third world country is thought miraculous by natives, as it preserves the dead body of a holy man buried there and gives visitors symptoms of euphoria. Katherine discovers that chemicals dumped nearby act as a preserving agent and release fumes that, when inhaled, cause elation.

When working as a missionary in Sudan, Katherine lost her young child and husband to angry religious maniacs. Blaming God for her misfortune, she has since lost her faith and now seeks to dispel holy dogma with the powers of science. Called to a town named Haven located in the bayou of Louisiana, Katherine investigates what locals believe to be a bona fide miracle, or plague rather. A two-mile stretch of a nearby river is now filled with what appears to be blood. She and her assistant assume a scientific explanation, but when more of the Bible’s ten plagues begin to occur, they find themselves unable to explain these occurrences away with scientific jargon. Frogs dropping from the sky and swarms of flies reinforce Haven’s supposition that God has delivered his wrath.

With help from the local school’s science teacher Doug (David Morissey—who’s voice sounds like Bing Crosby with a southern swagger), Katherine discovers the townspeople blame the plagues on what they call an “unnatural” family that lives in the woods. They’ve seen strange happenings in them there woods and God surely knows thems nogoodnick McConnells are instigatin’ these here plagues—best to kill ‘em fore any more plagues be a comin’! The townsfolk want the twelve-year-old girl Loren McConnell dead, as they claim she’s some kind of hell spawn. Played by young actress AnnaSophia Robb from this year’s Bridge to Terabithia, the girl’s obvious talent is wasted on blank stares of catatonia and eerie moments of predictable jumps and shocks. Though I won’t disclose them here, The Reaping holds twists and turns under its coat. Except when the flasher flashes, we find he’s wearing nothing more than some sweatpants and a R.E.O. Speedwagon t-shirt… not shocking at all; even a little pathetic.

For a while, I thought this movie wouldn’t reinforce religious fanaticism—that it might rely on the strength of Swank’s skeptic character to dispel the plagues as an elaborate hoax. I’d hoped (especially with the religious wars going on in the world right now) that Swank’s character would find the biblical atrocities the result of special effects created by a cult—extremist(s) relying on religion as a tool through which to obtain power. A subtle-but-entertaining political statement could have discussed what religion can do in the wrong hands. One could argue The Reaping ends with such a message. But I think any “message” whatsoever is lost in the all-too-familiar twists in the plot.

The first act, wherein the mystery remains concealed, intrigues with its creepy prospect. Scenes where Swank and her assistant wade through a waist-deep swamp of blood admittedly threw a shiver up my spine. All at once the story laughably turns to satanic cults, human sacrifices, and blah-blah-blah. Wouldn’t it be nice if films like this aspired to be more than dreadful remakes of better films such as Rosemary’s Baby and The Omen?  With The Reaping, we get another ghastly horror flick that recycles ideas from better pictures in an insultingly obvious way.