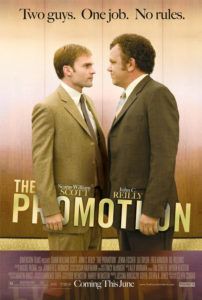 If you enjoy the freedom of self-employment, had the fortunate luck of avoiding corporate bureaucracy, or never worked a day in your life, don’t bother seeing The Promotion. For the rest of us well-versed in climbing the corporate ladder, and all the ass-kissing involved therein, the film rings true. Written and directed by Steve Conrad, who caught America’s heart with the Will Smith drama The Pursuit of Happyness, the film is an unfortunately spot-on look at the desperate lengths Average Joe will go to attain the American Dream.

You might expect something bawdy just by looking at the cast list of Seann William Scott (Mr. Woodcock) and John C. Reilly (Walk Hard). But they’re both restrained, never winking at the camera, and surprisingly in character for the duration. Both play essentially the same role: a man with familial responsibilities trying to move up a pay-grade. Enduring a drawn-out interview process, they begin to buckle under the pressure, taking it out on one another. Deciding in which man to place your sympathy remains the film’s test, when really there is no antagonist, unless you consider both their own hero and villain. They’re decent enough fellows. Doug (Scott) seems to genuinely love and wants to support his nurse wife (Jenna Fischer). Richard (Reilly) is a recovering alcoholic and drug addict trying to prove to his spouse (Lily Taylor) and their child that he’s the family man they need him to be. And both are just dreaming for the day when they advance from short sleeves to long sleeves and a tie.

Their objective resides in a “promotion” from lowly Assistant Manager to the full blown Manager of a grocery store, from one hell to another. It’s a shame neither realizes their immediate boss (Fred Armisen) is miserable, as they no doubt will be when one or the other gets promoted to his same position. Under the penetrating eye of a company stooge (Gil Bellows), they’re asked to endure a work retreat (led by an enthusiastic go-getter played by Jason Bateman in a brief cameo), the kind where everyone bubbles with false enthusiasm because The Boss is watching. In front of everybody, Doug allows Richard to make a fool of himself, and from then on a minor war ensues, complete with lousy shift assignments and flying bottles of Yoo-hoo.

Despite this setup, low-key humor sustains the heart of the movie; we could easily imagine a series of farcical blunders resulting in a raunchy, over-the-top gross-out comedy akin to cringe-inducing moments in Meet the Parents. But about the most outlandish thing that happens between the two men is the throwing of a tater tot, followed by a pathetic parking lot scuffle. Conrad is never more concerned with delivering a punchline than with creating a mildly satirical, but for the most part an accurate nudge at workplace politics.

For some, Office Space and The Office are (sadly) consistent with our Monday through Friday lives. We laugh knowingly at Lumbergh asking his employees to come in on the weekend and Michael Scott thinking he’s hip, about as much as we cringe when it actually happens. We put on that phony smile at the company picnics. We force down the gruel at cubicle-city potlucks. We dress up every day in a shirt and tie because that’s the gateway to our hopes. Meanwhile, we’d much rather be doing whatever might strike our fancy—eating cold pizza in our pajamas and catching a cartoon superhero marathon on Jetix. (Am I alone here?) The Promotion does a sly job of exposing truths about the degrading process of moving up, finding ironies and wit in the hoops we jump through to get there. Conrad’s commentary and sense of humor are muted, bursting out for the occasional hilarious moment in a film made up of otherwise constant enjoyment. Most impressive is his ability, even with a sitcom satirizing the very same material each week, to maintain his subject’s sharp relevancy.