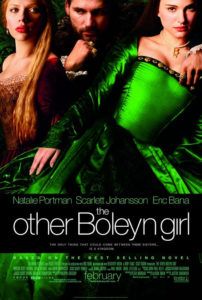 The Other Boleyn Girl hopes your knowledge of 16th century English aristocrats is limited, by offering juicy period fiction in place of dramatized historical representation. Indeed, there’s much this film gets wrong, but not without distracting us with its attractive costumes and robust plot. Anne Boleyn’s famous history runs for a short duration, as her scandal, downfall, and eventual execution for crimes of adultery, treason, and incest shook England. But this film ponders Anne’s sister, spinning a yarn wrapped up in sexual and Tudor Court politics.

“Allowing men to believe they are in charge. That is the art of being a woman.” Those are the fateful words of Lady Elizabeth Boleyn (Kristin Scott Thomas), mother to plotting daughter Anne (Natalie Portman) and young naïve Mary (Scarlett Johansson). Both sisters are sent to the court of King Henry VIII (Eric Bana) because it pleases him, after his wife Katherine of Aragon (Ana Torrent) fails to produce him a male heir. While originally intended to be Henry’s mistress, Anne’s affronting behavior bodes ill for her future, leaving Mary to satisfy the king (despite having been married days prior). This virtual whoring of the Boleyn sisters is orchestrated by their pseudo-pimp uncle, The Duke of Norfolk (David Morrissey), who schemes under the family name in hopes of securing wealth and power via Henry’s sexual appetite.

We watch as Mary’s innocence is literally stripped away, yet she falls in love with her king during their tender romance. Meanwhile, sent to France in exile for her behavior, Anne returns with all the feminine wiles of the French Queen’s court attendants, playing hard-to-get with the king until he’s ready to burst. Having already impregnated mistress Mary, he resolves to forgo any niceties owed to either her or his wife for the chance to conquer Anne. Manipulating her way to the throne, for Anne to keep her place is another matter entirely.

Portman and Johansson do ample work here, but I can’t help but feel they’re performances aren’t big enough to fill those layered dresses. Portman struggles with a character that has more range than she can control, and Johansson’s timidity translates as emptiness onscreen. Bana’s Henry VIII conveys little more than eyes widened with sexual frenzy and the occasional, pensive expression as he ponders his future heirs. Existing superficially as a dolled up penis with a beard, Bana’s Henry seems trite and bland in comparison to previous, boisterous Henry VIII performances by Robert Shaw, Richard Burton, or most recently Jonathan Rhys Meyers. How could he hope to compare when he stands on the sidelines to the Boleyn sisters, whose detailed history with their king here is speculation at best.

Written by historical novelist Philippa Gregory, who continued this book with a whole series of Boleyn novels drawing heavily from what’s been called poor research, there’s much her source material gets wrong. Screenwriter Peter Morgan, having worked on British television’s Henry VIII with Ray Winstone in 2003, adapted the novel, historical inaccuracies intact. Explained away are Anne Boleyn’s charge of incest, the rumored homosexuality of Boleyn brother George (Jim Sturgess, from Across the Universe), and the King’s relinquishment of Queen Katherine for the sake of his horniness. No doubt Shakespeare would balk at the film’s impression of Henry “Hotspur” Percy (from Henry IV), an otherwise intense character reduced to utter silence and a blank disposition. The most profound historical inaccuracy, however, appears in the depiction of Mary, who was actually the older sister. Gregory switches the sisters’ ages, if only for dramatic effect. And many sources suggest Mary was quite promiscuous prior to bedding her king, having already slept with King Francis I of France before ever meeting Henry VIII. But the film’s Mary enters greenly into her affair, as timid as a virgin, blushing and soft-spoken, all for the sake of its theatrical pull.

Even with its sweeping historical charge, the remarkably melodramatic narrative goes unsupported by the film’s visuals, which no more speak to grand epic-sized cinema than your average daytime soap opera. Perhaps director Justin Chadwick intended a sense of intimacy, as opposed to massive wide shots reveling in period splendor. This genre generally calls for feats in expansive photography, pulling back far enough to capture the entire kingdom in the backdrop, like some portrait painting with grand depth-of-field. In contrast, cinematographer Kieran McGuigan (whose résumé consists of mostly random episodes on various television series) keeps his frame tight on the characters’ faces. Every shot feels rather confined, with the camera usually placed behind a wall or gate, slowly emerging left to reveal our characters engaged in their intimate personal affairs. Chadwick turns his audience into Peeping Toms, always the third, invisible party in a conversation we were never meant to hear.

In a way, this approach is effective; by personalizing these large-than-life characters, Chadwick and McGuigan humanize their story, which, at its core, is about love, envy, and politics. And despite all their efforts, we rarely feel attached to these characters, as most sell out all too soon, becoming whores or hungry power-mongers. Elizabeth: The Golden Age had much of the same problem by putting too human a face onto its grandiose figurehead, leaving mystery nil and dramatic irony at a minimum. Even the filmmakers, I believe, sought to make The Other Boleyn Girl a predecessor to Elizabeth and its sequel, ending on an irrelevant historical note (for this story, anyway) whose bearing has little to do with the lusty events preceding it. Contrived and drowning in its own assumptions and supposition, the film’s pulpy-thus-entertaining approach suffers obvious exaggeration, making us want to read about the real story after enduring this saturated piece of period mishmash.