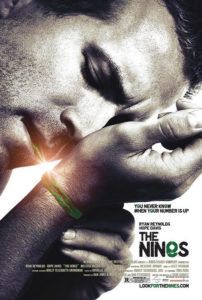 While ongoing role-playing universes like those in World of Warcraft provide escape from traditional reality, videogames in general suggest humanity requires control, or power, enough for game designers to program “god mode” into most games, giving players savvy enough to crack the code access to all hidden character abilities. Infinite lives. Invulnerability. That sort of thing… Imagine if life had “god mode”. The Nines doesn’t directly involve videogames, though it does discuss them in passing, in turn creating the association. Three subtly connected storylines, all performed by the same set of actors, wrap around each other, assembling separate narratives the audience interlaces. The curious connection between them, how they’re all just another try at the same story but at once wholly different, fascinates us. First-time director John August handles his dreamy adventure with a slow pace, shelled by spurts of speed and humor.

Ryan Reynolds stars as the protagonist in each of the film’s three parts. In the first, called “The Prisoner”, Reynolds plays Gary, a television actor caught smoking crack and subsequently put on house arrest. Melissa McCarthy (best known as Sookie from the much-missed “Gilmore Girls”) is his publicist who lingers around as Gary’s only company, eager to spark a romance. Hope Davis plays Gary’s lonely housewife neighbor, who warns him that his life is not what it seems. For world number two, entitled “Reality Television”, Reynolds plays Gavin—a version of August himself—a writer contending for control over his new television pilot called “Knowing”. Followed by a reality TV film crew, Gavin butts heads with a back-stabbing executive (Davis), while trying secure his best friend, McCarthy (playing herself), as the show’s star. Here August reveals The Writer’s obsession with his world, playing god over his own characters, meanwhile desperate to lose himself in them. When he can’t escape into his show, he delves into videogames—at least there he can be master. The third segment, “Knowing”, takes us into the living reality of Gavin’s show. Gabriel (Reynolds) is a videogame designer out on a picnic with his wife (McCarthy) and child (Elle Fanning). Stranded with a dead car battery, Gabriel goes off to get help, finding a hiker (Davis) with an ulterior motive—the same motive Davis’ characters have throughout the movie, to expose Reynolds’ importance.

Known throughout Hollywood as screenwriter of hits like Go and Big Fish, not to mention his fruitful script-doctoring, John August’s first foray into directing shows incredible promise, recalling Richard Kelly’s debut on Donnie Darko (though one would hope August doesn’t follow his first picture with the creative equivalent to Kelly’s second, Southland Tales, an utter train-wreck). August meshes the theoretical with pure entertainment, offering a worthy new entry into the growing “mindfuck” subgenre. More personalized than The Matrix and less auteuristic than eXistenZ, he nonetheless addresses The Writer’s supremacy and computer-culture escapism to their most philosophical extremes.

Shot in 22 days, mostly in August’s own house, the low-budget film hinges on its production simplicity as a contrast to its narrative complexity. August ponders potential metaphysical and abstract results of The Writer getting too close to his output, all without flashy editing or garish special effects. What exactly “the nines” of the title represent I will not say, nor will I discuss the plot significance of the film’s puppeteer themes. Each ‘G’ has no control, when really only the opposite is true. August maintains that we search for godly equivalents; autobiographically for August, this could refer to a videogame connoisseur, a television show creator, or a writer of Hollywood movies. The Writer creates a universe and holds ultimate control over its every detail, what its characters say and do, who they love and what drugs they take; and with control, The Writer can begin to love his characters, perhaps too much, which August believes can cause problems of explicit subjectivity ruling the final product (both desirable and problematic).

Vying for control are two realities: The Writer’s actual and created worlds, in one of those genre-bending cinematic treats that audiences should rush out to see. (Or in this case, rush out to rent. The Nines was in theaters briefly, in officially no more than three cities. DVD sales and rentals will hopefully take up the slack.) With The Nines, August makes an impressive debut, launching himself beyond his frequently commercial fare with an intelligent indie film. Translated by way of episodic storylines, his thesis on authorship discusses the creative mind with vast allegorical promise, yet keeps his ideas open for interpretation. The movie leaves you scrambling to assemble its pieces, which you’ll be doing for hours, if not days to follow—a process I enjoy to no end.