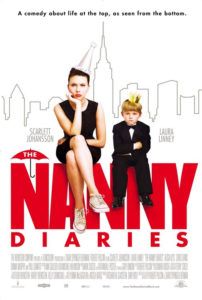 Writing from experience in the post-college graduation period, there’s just too much possibility. It’s overwhelming. And it’s easy to find yourself wrapped up in whatever’s available, if only because the solution is simple, even if the pay is so-so and the boss is a jerk. Eventually, we quit those jobs and move on—it’s part of growing up. The Nanny Diaries tells the story of such an in-between job. Annie Braddock (Scarlett Johansson) has recently completed her undergraduate degree in business and anthropology. With all the possibility the world offers, she bombs one job interview and subsequently jumps into (literally) a nanny position for a posh New York City family.

Mrs. X (Laura Linney), Annie’s new employer, is named as such since the film, much to our enjoyment, is presented as Annie’s graduate school application—a subjective anthropological study of New York’s Upper East Side. All characters are treated as test subjects, de-named, and represented through Annie’s analytical eyes via narration. Had this film been a standard finding-yourself yarn, I might not have enjoyed it as much. Of course, this is just a brainy filmic trick to disguise the clichés running rampant in the script, but damned if it isn’t a convincing one.

Annie’s vision of Upper East Side mothers describes women with no jobs, no income, and yet too much money and not enough time to parent their child. That’s where The Nanny comes in. Mrs. X refers to Annie only as Nanny (you can bet at least one person calls her “Annie the Nanny” and laughs because, you know, it rhymes). Mr. X (Paul Giamatti) is usually out of town on business or off with his mistress, and if he is around, he’s too preoccupied to make eye contact with his son. There’s a lot of “Nanny do this,” and “Nanny do that while I go to the spa” from both parents.

Annie’s friend Lynette (Alicia Keys) wonders why she would subject herself to such torture. There’s a whole community of Nannies for NYC’s aristocratic women collectively lamenting their treatment, yet all have either grown accustomed to their higher wages, or, as in Annie’s case, are too attached to their employers’ children to quit. Mr. and Mrs. X’s son, Grayer (Nicholas Reese Art), just wants attention, and eventually latches on to Annie. Child actor Art does a fine job handling poopie jokes and eating peanut butter and jelly from the jar, and he sucks us in, just as he does Annie. She may be paid to care for him, but she develops an authentic parental love for little Grayer, making her own pursuit of happiness with continued education or romance (with next door “Harvard Hottie” Chris Evans) impossible.

Scarlett Johansson plays a character akin to her role in Ghost World—analogous post-graduation troubles arise, only instead of apathy and melancholy, The Nanny Diaries focuses on the results of not chasing your dreams. She’s more believable playing everyday women-type characters, such as in Lost in Translation than her ornate roles in The Black Dahlia or Match Point. Even though Johansson is a tabloid star, someone who’s constantly having her offscreen romances analyzed by paparazzi and pseudo-newscasters, ironically she always impresses me with her performances shaped by naturalism.

Laura Linney’s performance steals the show. I like the way she’s able to maintain Nazi-esque order in her home, dictating Nanny and Grayer until we truly hate Mrs. X, her lousy parenting, and her disconnection from the “real world” (whatever that is). And then after an hour-and-a-half of belittling and punishing Nanny, Linney finally convinces us that Mrs. X can be a good mother. Linney has been notoriously overlooked in her career; she often plays supporting roles, most notably in The Squid and the Whale and Mystic River. Her one significant starring vehicle was You Can Count on Me, a rare gem from 2000 that also introduced us to Mark Ruffalo. Lately, though, she’s been hiding in the backdrop, always, for some reason, in a business suit, in movies like Breach, Man of the Year, and The Exorcism of Emily Rose.

Husband and wife writer-director duo Shari Springer Berman and Robert Pulcini manage an abundance of creativity (I really, really appreciated not seeing another Uptown Girls) within their quirky humor. But this material seems like a step down from their magnificent 2003 film American Splendor, which also featured Paul Giamatti (in a more significant, but equally grumpy role). This is a nice little melodrama, in the traditional sense, complete with class struggles and toppling of hierarchies. The Nanny Diaries offers more fun than that, of course, particularly in those cathartic moments when Annie tells off Mrs. X or insults the drunken chauvinist friends of her “Harvard Hottie”. Viewing upper-class matriarchs as an individual culture in and of itself may not be too far from the truth. For those of us who can’t afford a month in Nantucket or in the Hamptons, there’s a basic, refreshing joy in seeing lords of the manor kicked from their throne.