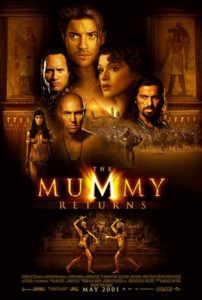 Writer-director Stephen Sommers has a definite style. Not that having style automatically infers something positive. He’s great at making brainless adventures where all viewers need to do is disconnect their minds and enjoy the action supplied onscreen. Sometimes that’s all audiences need. But expert escapism still requires some artistry and craftsmanship, qualities Sommers has no patience for. With The Mummy Returns, the sequel to his 1999 hit The Mummy, the director demonstrates both his love for B-movie entertainment and his intolerance for coherent storytelling. The movie performed very well, because moviegoers love this kind of crap. On a budget of $98 million, the sequel earned over $202 million in the United States and another $230 million internationally, which meant another sequel, a spin-off, and a ride at Universal Studios.

Nine years have passed since the events in the first film. Rick O’Connell (Brendan Fraser) and Egyptologist Evie (Rachel Weisz, her eyebrows no longer plucked to the edge of oblivion) now live in a massive mansion, no doubt paid for by the spoils of their previous adventure. They have a nine-year-old boy, Alex (Freddie Boath), an impetuous but intelligent little guy who acts the rascal in an otherwise humorless series of events. Our heroes don’t pay much attention to their son, allowing him to wander about alone in dangerous tombs surely loaded with booby-traps. No wonder he gets kidnapped later on.

But I’m getting ahead of myself… In a long prologue narrated by the City of the Dead’s guardian priest Ardeth (Oded Fehr), we’re told of the Scorpion King (played by Dwayne Johnson when he was still “The Rock”), a faux historical figure that once attempted to take over the known world. When his armies failed, he made a deal with the god Anubis (represented by a computer generated dog-man) securing him victory in exchange for his soul. His curse is to return after five-thousand years as an unstoppable evil, in the form of a poorly-conceived CG arachnid man. (Note: Why do all these supposedly horrible curses from ancient Egypt end with the damned party being upgraded with Apocalypse-bringing supernatural powers? Shouldn’t a curse subdue rather than improve?) Of course, the Scorpion King’s millennia-long nap comes to an end, and only Rick and Evie can stop his inevitable reign.

But wait, there’s more: A group of London-based cultists reawakens the first film’s mummy to stop the arachnid king themselves. Imhotep (Arnold Vosloo) is resurrected, complete with his stretchy jaw and cheaply animated decomposing body, sucking faces left and right to replenish his flesh. He doesn’t really do much beyond annoy the protagonists. I could explain more about the plot, but it’s all so preposterous that I’d be wasting your time, which this movie seems to enjoy doing. It’s an adventure picture that doesn’t know when to stop, take a breath, and allow its characters (some of them mildly interesting) to interact. Instead, we’re subject to armies of mummified pygmies and dog-men, a silly jet-propelled air balloon, and plenty of cheeky one-liners.

Oh, and apparently, long ago, Rick fell from the sky inside a meteorite sent from Krypton, and strengthened by the rays of earth’s yellow sun and our comparably light gravity to his home planet, he’s become something of a superman. No, not really. I say this because he’s able to elude all manner of natural (and unnatural) threats. One outlandish scene involves him outrunning light from the rising sun, carrying Alex no less, who will die unless he’s safely inside a pyramid when sunlight reaches it. Not many people outside of Superman are able to outrun sunlight, which approaching by the speed of the earth’s rotation moves at several hundred miles per hour. Then again, not many people are legionnaires named Rick O’Connell.

Akin to Rick’s superpowers, sometime between The Mummy and this sequel, the otherwise dippy librarian Evie became gifted with a sword and martial art acrobatics. No longer the clumsy, wide-eyed damsel, now she cocks a shotgun like a pro, keeping up with her adventurer husband for a change. Although the movie insists she’s the reincarnated Nefertiti, suggesting with a crude number of flashbacks that her skills were passed down, I highly doubt the original queen was proficient with firearms.

I’ll be honest. I’m not entirely sure I understand the inanity of the plot. The Mummy Returns is one of those sequels where the producers adhere to the Hollywood adage that “bigger is better” when they should be striving for its opposite, “less is more”. Those of us consistently disappointed by the outcome of sequels have come to learn, by and large, the former rule is false. But since I didn’t care for this film’s predecessor, I suppose I’m not really disappointed by the outcome, just certain that invariably a third film in this franchise couldn’t be any worse.