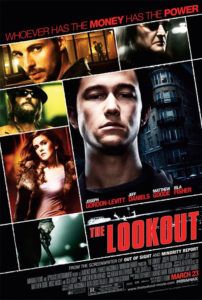 Thrillers often rely on gimmicks or twists to tell their story; audiences seem to expect that now. I’m frankly bogged down by the cyclical trends in narrative storytelling for suspense thrillers. Save a few, they lack the character or originality that Alfred Hitchcock or David Mamet could and can produce with creative camerawork, tangible characters, and expert writing. With his new film The Lookout, first-time director Scott Frank includes himself on a short list of directors capable of making a thriller worth the audience’s time. Frank’s previous work includes several outstanding screenwriting credits (including Dead Again, Out of Sight, Get Shorty, and Minority Report)—a resume from which one could have predicted Frank’s eventual superb directing debut. As a writer, his work meshes fluid dialogue with Hitchcockian suspense; as a director, Frank offers the same tension but gives his characters ample time to grow.

In the first scenes, we see Chris Pratt (Joseph Gordon-Levitt), a high school boy driving around with his date and another couple on prom night. On top of the world, Pratt is envied by everyone; he has a beautiful girlfriend, rich parents, and is famous locally for his hockey skills. While driving he shuts the headlights off so the green phosphorescent glow of fireflies surrounds the car. But with his lights off, he doesn’t see a stalled turbine in the highway, and they crash. Cut to four years later: Pratt’s injuries from the accident left his brain and body damaged. He has trouble remembering the names of objects, he walks with a limp, and he sometimes can’t control what he says—he’ll suddenly blurt out something from his subconscious, something he never intended to say. Pratt takes classes that help him to remember and to sequence; his instructor wants him to write down what a normal day is like, but he keeps returning to “I wake up.” A small notebook Pratt keeps in his pocket helps remind him of important details. Only the most important things are written there.

While the basis for the Chris Pratt character may sound too much like Leonard from Christopher Nolan’s brilliant 2000 film Memento, I assure you, he isn’t. Pratt makes new memories; he doesn’t have to “fake it” like Leonard did. These are different films, and when you see The Lookout, you’ll realize that the two films have little in common, save a character with a brain injury. Even though Memento is the better movie, The Lookout contemplates its character throughout. Only in the last third does the film become about the suspense. Gordon-Levitt, best known as the kid from 10 Things I Hate About You and TV’s 3rd Rock from the Sun, has now given audiences two great roles through which we can differentiate him from his early career. In 2005’s Brick, he played the lead in a Raymond Chandler-type film noir set around high school students; he incredibly reached the cool and collected disposition of classic noir characters such as Sam Spade or Philip Marlowe. The Lookout and Brick both show the aptitude of an adult actor. His performance as Pratt is all-at-once heartbreaking, frustrating, and magnificent.

Pratt lives with a blind roommate, Lewis (Jeff Daniels in another well-played dramatic role for the versatile actor). Placed together by a disability institute, Lewis treats his sightlessness as a minor tongue-in-cheek ding to an otherwise enjoyable life. Pratt is not as fortunate. Functioning the way he does, with the memories of his once-great life and the people he killed in the accident always on his mind, he cannot forgive himself. Pratt has an overnight job cleaning the local bank, but he can’t seem to convince the bank manager that his disabilities won’t prevent him from being a good teller. This job is just another adage to remind Pratt of how routine his life is forced to be. Out of the blue, an old high school acquaintance named Gary reintroduces himself to Pratt. It’s clear to us Gary has other motives, so when Pratt begins to associate himself with Gary and his friends, we feel a sense of dread. Luvlee (Isla Fisher), an ex-stripper and Gary’s friend, beds Pratt to reel him in. Eventually, Pratt is told the truth: Gary and his gang want to rob the bank where Pratt works, and they want him to help.

With his life but a shard of the clear pane it used to be, Pratt begins to resent what little he thinks he has and goes along with Gary’s plan—perhaps out of desperation to improve his life, or perhaps from confusion. The type of dramatic suspense audiences rarely get to see, The Lookout offers intelligent storytelling not contingent on twist and turns. We’re never concerned about the robbery or the action more than we are about Pratt. The story relies on the painful aftermath of a character’s tragedy, and what it takes for him to grow beyond that, in order to become whole again. Gordon-Levitt makes an incredible turn in this kind of film, and Frank’s choice to cast him was inspired. Also, Frank’s debut marks the arrival of an exciting new filmmaker whose approach is as concerned about characters as a screenwriter-first, director-second should be. Except, he has all the technical and visual makings of a burgeoning great.