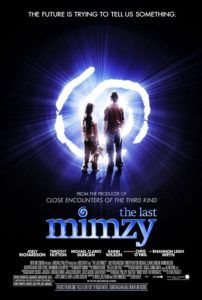 Based on the even more absurdly titled short story Mimsy Were the Borogoves by Lewis Padgett, The Last Mimzy begins in the distant future, where school children are telepathically told the ensuing story by their teacher. Nothing is less interesting on film than watching people talk to each other through their psychic abilities. The boredom of watching telepathic conversations actually makes a nice little metaphor for this entire film: we’re watching something, knowing that an interesting story is in there somewhere, but we just can’t see it.

Flashback to present-day Seattle, to your everyday elementary school—a place where test score answers aren’t written on the palm of your hand but text messaged via cell phone, and where it’s normal for school kids to pass through a metal detector before class. (Is it me, or is there something wrong with our society when such sad truths are portrayed in film so nonchalantly?) Enter Noah and Emma Wilder, youngsters with average grades and average parents. They’ve got a personality-less mom (Joely Richardson) and your typical movie dad (Timothy Hutton)—the kind who’s always getting called into work, leaving the wife and kids disappointed for the weekend trip to the beachhouse. Dad is, of course, the skeptic later on.

It’s on their beach where Noah and Emma find a strange metal capsule bearing a slew of alien toys—seemingly inconsequential objects (shiny rocks, a rectangular piece of glass, a seashell, a jelly pod, and a stuffed animal bunny). When touched, these uncanny gizmos make cringe-inducing sounds, which will either just annoy you or will make your head explode. Noah and Emma each have their own supernatural reactions: Noah learns the infinite possibilities of geometry and how to speak to insects; Emma talks to the bunny, named Mimzy, and telekinetically levitates crystalline rocks.

Amazing things start happening and the film quickly enters territory recalling Spielberg’s E.T. the Extra-Terrestrial, where kids assist an out-of-this-world presence in getting home, except The Last Mimzy has no alien and no charm. Mimzy talks to Emma and only her—concerning for any parent. Another object, which Noah calls “the generator”, teleports things from one spot to another and momentarily drains city power to a minimum, gaining the attention of Homeland Security (introducing a pointless security official character played by Michael Clarke Duncan). When the parents uncover their children’s secret, mom decides the best way to handle the problem is to throw the alien toys in the garbage, because everyone knows the mysteries of the universe are best disposed of by city waste disposal.

We never get a sense of importance, perhaps because Mimzy the bunny has no personality, and it’s difficult to accept wonderment from inanimate objects. Actor Haley Joel Osment barely achieved that feat in Spielberg’s A.I.; if you had trouble connecting with an actor portraying a robot, chances are Mimzy will have less of an influence. It’s all inspired by Lewis Carroll’s 1871 novel Through the Looking-Glass, and What Alice Found There, which explains the unknown—but where’s the joy in that? We learn early on what the mystical objects are for; all the potential mystery of the children’s newfound intelligence and ability is lost before the film really begins. This is a contrived, overly self-conscious movie, one where, from scene to scene, audiences will be able to see how obvious it is when the filmmakers ineffectively attempt to pull our heartstrings.