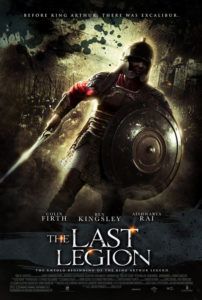 Usually present in period pieces and romantic comedies, actor Colin Firth’s name doesn’t ring synonymous with sword and sorcery epics. In fact, was there ever a last name more feathery than Firth? With curly mop-top hairdo and stoic expressions, Firth is wholly miscast. But that’s just one of many problems plaguing this movie. The Last Legion is a mix of historical truths and myths, all mish-mashed into an absurd adventure story lacking in both credibility and appropriate thrills. If you know anything about Roman history, when the movie begins by introducing us to Romulus Augustus, you just know this movie isn’t going to end well. In his mid-teens, Romulus Augustus (here played by Thomas Sangster) was Rome’s last emperor, and was eventually lost to history when Rome fell. Like 2004’s King Arthur, this film hopes to relate the Fall of Rome to British mysticism—so we know we’re in for King Arthur-sized disappointments when folks in The Last Legion begin discussing Excalibur.

Looking at the character roundup, even at the film’s basic outline, I found The Last Legion’s similarities to The Lord of the Rings innumerable, even pathetic.It begins just as The Fellowship of the Ring began, with a narrated pre-history introduction. Dolled-up as a wizard of sorts, Ben Kingsley plays Ambrosinus, who is garbed in white robes, has long grey hair, and carries a staff (Gandalf the White). Ambrosinus protects Romulus—a “small person” with great power (Frodo)—who is the next Caesar. When the Empire is overrun by Goth leader Odoacer (Peter Mullan), Ambrosinus and Romulus are kidnapped and held on Capri, where Romulus finds Excalibur (The Ring), an inanimate object containing immeasurable power. Meanwhile, Romulus’ Roman bodyguard Aurelius (Firth, playing Aragorn) and an underestimated female Indian soldier Mira (Aishwarya Rai, playing Rohirrim’s underestimated female soldier Eowyn) are out to save them. Eventually they escape with the sword and go off to Britannia, where Rome’s Last Legion of soldiers remains. There, they can make a stand at the legion’s stronghold against Odoacer’s soldiers, and those of the metal-masked local magician Vortgyn (a combination of Sauron and Saruman) with whom Ambrosinus has a past.

Neither villain, Odoacer nor Vortgyn, has enough screen presence, or screen time, to create sufficient conflict, even in the sleepy Saturday afternoon entertainment-type way. Odoacer has barely three scenes; his scarred henchman Wulfila (Kevin McKidd) leads the assault on Romulus. Vortgyn remains a faceless gold mask, inhuman, and not exactly menacing since we never see the result of his presumed power (or his face—at least we could see Sauron’s eye). He seems to want Excalibur for reasons which aren’t explained.

Nothing about The Last Legion grabbed me. I always felt outside the story. Characters and performances are bland, which is surprising, considering the presence of Ben Kingsley (reduced to doing his best Ian McKellen impression). Take Colin Firth’s hero role, Aurelius. Firth is a strong actor to be sure, but know your limits man! His chubby neck and weighty presence leave an emptiness that could have otherwise been filled by any number of strong-guy clod actors that look the part. It’s silly watching the quiet, nice-guy classical actor, whose filmography includes mainly romances like The English Patient and Shakespeare in Love, adorn armor and shout orders at his troops. Perhaps I’ve seen him in that embarrassing reindeer Christmas sweater from Bridget Jones’ Diary one too many times.

Director Doug Lefler’s first major motion picture, The Last Legion is nothing more than a B-picture gone wrong. Rather than embracing its low budget and keeping the story small-scale, it extends the money further than it could ever hope to reach. Lefler worked on Army of Darkness as Sam Raimi’s second unit director; unfortunately, he learned nothing about cost-cutting or innovative-but-cheap camera tricks. Copying from every other swordplay epic of its type, the film completes its failure with uninspired swinging from ropes, bold speeches to the men, and long journeys over the Alps (which by what the film shows, looks as if it holds no challenge at all). Repetition throughout this genre is unavoidable. It’s all been done, sure, and we as viewers expect that. Only, if the filmmakers had had the decency to give us a little creativity, we wouldn’t be bouncing our legs in annoyance from how plain this movie is.