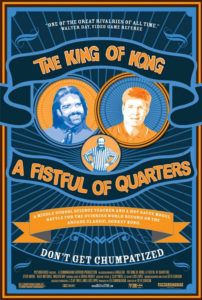 What does a documentary about Donkey Kong champions, entitled The King of Kong: A Fistful of Quarters, say about American values? Perhaps that there isn’t enough for people to do besides sit around and play, or watch others play, vintage arcade games? Perhaps it’s about the nature of competition or the emptiness of winning. Then again, this could be the most satisfying tale of good vs. evil since Star Wars. The King of Kong sets up an underworld of competitive gaming, sort of like Trekkies had been injected with a hearty shot of drama. Director Seth Gordon enters us into the cliquey world of competitive vintage gaming, where top-score holder Billy Mitchell is treated like Brad Pitt, and everyone around him is part of his entourage. The geeky plot of this documentary may turn you off, especially if you’ve ever had to endure watching someone play videogames, but Gordon sets up the conflict like a high-noon duel. Gordon avoids brooding over the surface subject matter; instead, he digs deep into a David and Goliath-type melodrama, with Mitchell as the awful Goliath and Wiebe as our hero.

Official arcade scoring guru Walter Day and his company Twin Galaxies monitors gaming scores on retro machines like Pac-Man, Mrs. Pac-Man, Defender, and of course Donkey Kong. His job has been uneventful since 1982, when Life Magazine featured an article that announced 17-year-old high-score champion Billy Mitchell as “Gamer of the Century” with his Donkey Kong record. In 2003, Mitchell’s record was defeated by Steve Wiebe (pronounced wee-bee), an unemployed ex-engineer and family man from the state of Washington. Thus begins the drama.

Working away from the arcade lounge environment, in 2003 Steve Wiebe set up an old-fashioned standup Donkey Kong game in his garage during a one-year period of unemployment, wherein he was going back to school to get his masters in teaching. Wiebe is described as “anti-social” by his brother and friends, and though he was always considered talented, he never imbibed a feeling of success from life. He’s someone who’s been crapped-on over and over, and was then desperate for some kind of victory. Remembering how his abilities on Donkey Kong as a child brought him joy, he sought out to break Mitchell’s record—a goal achieved and videotaped in the privacy of his own garage. He had no idea what he got himself into.Since his record setting game in 1982, Billy Mitchell has enjoyed his celebrity, so much so that his now-pompous outlook on life has turned him into an unwaveringly cocky man. Incapable of even the slightest modesty, Mitchell’s long mullet hairdo and U.S.A. necktie may induce laughs from us, but to his gaming people, he’s a god. His obsession is “success” in all forms, and he plots and schemes with Machiavellian wit to own it. From his game scores to his booming chicken wing business in Florida, Mitchell is on top of his world (even if he does look like a potential “Just For Men” posterboy).

Throughout the documentary we meet an array of oddball arcade game celebrities, including one Roy Schildt (who sports some impressive shoulder nipples thanks to prolonged hanger use), the pronounced enemy of Billy Mitchell. When Steve Wiebe, now a middle school science teacher, gets a score far surpassing Mitchell’s record, the score is brought into question when the scorekeepers discover Schildt may have tampered with Wiebe’s machine. The only way Wiebe can now “officially” beat Mitchell is a public duel at Funspot, a New Hampshire-based arcade lounge where Twin Galaxies holds its tournaments. From there on out, we see Wiebe doing his best to break Mitchell’s record, and Mitchell acting like Christ for Nintendo addicts. We meet Wiebe’s family and realize he may be the nicest man alive, and his wife and two kids the most patient family. Although, there is one scene where Wiebe’s son interrupts him as dad is getting a world record on tape. “Wipe my butt!” the child shouts. “Hang on for a minute,” Wiebe replies. “Stop playing Donkey Kong, dad!”

Meanwhile, Mitchell’s worshiped gaming reputation is challenged by what the film shows to be foul, unsportsmanlike moves on his part, and much worse actions by his followers, who happen to operate Twin Galaxies. I realize documentary filmmakers have the opportunity to spin a story, but there’s no denying the arrogance Mitchell shows onscreen. He answers his phone, “World record headquarters” and talks of “no surrender” as if he was in a war. And to someone whose entire life is measured on a video game record from 1982, I suppose this competition was like a war, if only to sustain the illusions he’s built up about himself. For Wiebe, however, the game itself was hardly the conflict, even when stakes are set higher after The Guinness Book of World Records calls and wants Twin Galaxies to provide top scores.

Wiebe was on the spot for a Q & A after my screening at Lagoon Theater in Minneapolis, MN. He said that this whole Donkey Kong war was hell for his family. Meeting him also authenticated his depiction on film as affable and down-to-earth. Wiebe said the battle between he and Mitchell still rages on today. The two competitors do not speak, and in fact have never really spoken, as Mitchell doesn’t pick up the phone when Wiebe calls, refuses to speak with him in person, and refuses to see The King of Kong, despite the producers’ offer to give Mitchell his own private screening.

Wiebe met producer Ed Cunningham through a friend of his back in 2003 when Wiebe’s first high score was challenged by Twin Galaxies for its authenticity. Cunningham immediately saw potential for “high drama”. Certainly, this film is not only about video games; that’s only the beginning, really. We see awkward characters, pale from their avoidance of sunlight, many without girlfriends, and they’re funny, sure. Mitchell’s unbelievable self-commentary and haughtiness on his favorite subject (himself) never ceases to be hilarious, in a man-is-he-pathetic way. But I found myself feeling so strongly about the underdog plot because it’s ultimately about the pursuit of happiness—whatever form that may take.

The King of Kong is likely to be the best documentary of 2007, and without doubt one of the year’s best films. Human conflict is broken down on such basic levels of right and wrong that we don’t concern ourselves with scores, rather what they signify—the joy and hard work they imply. Stories like these are why we go to the movies. I won’t ruin the outcome of Wiebe and Mitchell’s head-to-head, because it’s something you have to see to believe (so keep your nose out of the Guinness’ 2008 edition until you see this movie!). The film deals with issues of bureaucratic decision making, spineless behavior, and even conspiracy. And the outcome couldn’t be more fitting. Even Hollywood is pitching in its two cents with a dramatization of the events, due in 2008. Wiebe said he’ll probably have a cameo.