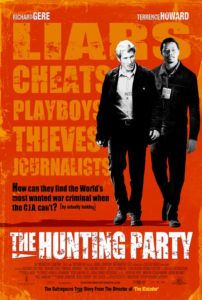 We have to accept a few ideas before viewing The Hunting Party, chiefly that we’re lied to by the media. That’s not to suggest that the media intentionally reports fabrications, rather the absence of facts. To take everything the news reports at face value could be fatal, unless we look critically at what’s reported, or more importantly, what’s not reported. Director Richard Shepard’s new film points out that the horrors of war are rarely reported on in all their grim detail. He does this by skewing facts themselves in proper Hollywood “based on a true story” style, except he acknowledges it, which makes all the difference. From Scott Anderson’s article in Esquire, Shepard discusses the aftermath of the 1994 Bosnian conflict, wherein Bosnian Serb warlord Radovan Karadzic, known in the film as The Fox, has perhaps struck a deal with the United Nations or American government granting him absolution from his crimes if he would step down from his high position.

The true story goes that five real-life journalists (Anderson, Sebastian Junger, John Falk, Harald Doornbos, and Philippe Deprez) who had covered the Bosnian war met up in Sarajevo for a pseudo-reunion; a few dozen drinks and some unthinking words later, the five found themselves on a half-assed attempt to capture Karadzic. After locals mistakenly identify them to be CIA assassins out for Karadzic’s head, they decide to pursue him anyway, seeing how far they can get. Too far, as it turns out, as Anderson’s article describes a search that was perhaps too easy for five journalists. If they can find Karadzic, why can’t anyone else?

Richard Gere plays the fictitious Simon Hunt, a former journalist and correspondent whose death wish addiction covering wartime content sends him flying off the deep end on national television. He has a breakdown and curses the conflict as butchery, calling his in-studio anchor (the recently maligned James Brolin, acting somewhere in between Dan Rather and Tom Brokaw) naïve for supporting any other ideology. Hunt then disappears from the journalistic map for years. Time passes and Hunt’s longtime friend and cameraman Duck (Terrence Howard) has since taken a cushy studio job. No war, no risk. So when Hunt shows up in Duck’s hotel room, it’s “no” to his get-Pulitzer-quick scheme, which Hunt refuses to divulge until Duck agrees to play along. Addicted to the type of journalism where he’s dodging bullets and tank shells with a camera on his shoulder, Duck concedes. They’re joined by Benjamin (Jesse Eisenberg, channeling Woody Allen), who’s very green and vocally proud of his time at Harvard. The two veterans see right through him, however, since he’s got that “executive’s son” look all over him.

Hunt has The Fox’s hidden location, only the proposed interview is more like a kidnapping for the fugitive’s $5 million reward. Duck has seen Hunt claim such desires before, suggesting Hunt once planned to assassinate the leader of such-and-such country and never did. And so Duck blows off Hunt’s claims until they show up in a Serbian bar with patrons who are clearly loyal to The Fox; when Hunt doesn’t flinch at having his life threatened, his partners realize that Hunt is dead-serious. Sherpard keeps his tone light and pulpy however, so we’re always laughing when they escape some situation like this.

I sincerely hope Richard Gere’s agent is getting a hefty bonus this year, as the actor has done some of the best work of his career in 2007. Back in April, he starred in The Hoax, an entertaining look at Clifford Irving where Gere’s character was anything but idealized.  Later on this year, he’s one of many in an impressive company of actors playing Bob Dylan in Todd Haynes’ biopic I’m Not There. For several years there in the 1990s, the best we could expect is Primal Fear, whereas his lows were the all-time low of lows (Autumn in New York, Red Corner, and The Jackal). Up until now, Gere hasn’t been in good movies since the late 1970s, early 1980s. Despite his glossy and public offscreen persona, he safely floats in the role of a pathetic has-been, maybe because Terrence Howard’s role is so one-note in comparison.

Richard Shepard also wrote 2005’s The Matador, another darker-than-dark comedy, but here he takes a more active role when playing with concepts of truth and fiction. In a way, it reminded me of Three Kings, that brilliant 1999 film by David O. Russell, since both meander around truth, lies, and proudly flagrant exaggeration. The Hunting Party leaves you feeling suspicious of the media and the government, wondering what else we’ve been lied to about, which, I think, is ultimately the point.