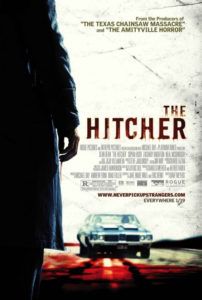 A remake of the 1986 film starring ultra-cool Rutger Hauer and not-so-hip C. Thomas Howell, The Hitcher had me rolling my eyes and screaming “What?!” in my head more than once. The movie’s two lead protagonists, played by Sophia Bush (whose most notable credit, sadly, is John Tucker Must Die) and Zachary Knighton, were so stupid, so impractical, that their idiocy defied even horror movie logic. At a runtime of 83 minutes, the picture had barely a chance to make us care about its characters. But even if it had been longer, the direction was so bad it would’ve been impossible to call The Hitcher even a guilty pleasure.

The story follows a couple in their early-twenties who are traveling across the country for spring break. They give a hitchhiker (Sean Bean) a ride and he ends up being a psycho. And you know what? That’s bad news. The couple struggles to escape the murderous drifter, except he’s framed them to look like the killers. Not only does the couple have to escape the killer, they have to prove to the police that they’re innocent of the hitchhiker’s murders.

The young couple has SO MANY opportunities to get control of the situation and just explain what has happened to the police, but instead, this logic-challenged film assumes the audience will be so caught up in the thrills, we’ll forget about common sense. The movie’s leaps almost go out of their way to underline the irrational behavior of its “heroes.”

For example, the couple is arrested for one of the hitchhiker’s murders; when they are interrogated by the police, neither protagonist asks for their one phone call or their right to a lawyer. Any dimwit knows these rights, as they’re often used in movies, but they’re distractingly forgotten to move the plot forward. Later in the film, the police believe Sophia Bush’s character shot a police officer in the head with a pistol, but it was really the hitchhiker who was off in the distance, shooting with a rifle. The couple, rather than tell the police “Hey, check the bullet in the officer’s head. It’s not from this pistol,” choose to become fugitives, running from both the police and the killer. Stupid.

Aside from the film’s evident plot holes, the direction of Dave Meyers is the sloppiest I’ve seen in some time. The Hitcher is the director’s first feature; previously he did music videos. This becomes painfully obvious, as most scenes are set to recent college rock. In what could have been an impressive action sequence, the hitchhiker single-handedly takes out four squad cars and a police helicopter during a high-speed chase; Meyers awkwardly sets the scene to music, playing an abbreviated version of the Nine Inch Nails song “Closer” against the action. What’s more, the director takes a scene that could have shown a great amount of gritty detail and chops it down with quick, Michael Bay-esque cuts, so the scene is nearly unreadable. I’m not sure what, according to the producers, qualified Meyers to direct this movie; his background with music videos is readily apparent. I sometimes felt like the film was nothing but a series of music videos strung together.

Sean Bean’s hitchhiker character remains curiously unexplained. Is he supposed to be on par with movie maniacs like Jason Voorhees or Michael Myers, with a certain invulnerable mysticism attached? Or is he just a plain, ordinary psycho? The film wastes its time with the two protagonists and forgets the most interesting character in the film is the villain. It is, after all, called The Hitcher, not The Adventures of Jim and Grace: Numbskulls. Bean’s character relies on giving a series of menacing looks and creepy advances, as opposed to something that might help the audience somehow illuminate the hitcher’s goal… such as, I don’t know, DIALOGUE. Wasted are the talents of a good actor, Sean Bean, who should advance himself beyond bad horror movies and get back to well-placed supporting roles in important pictures like The Lord of the Rings and Ronin.

Hollywood, remaking a movie means you should IMPROVE on the remade film. There are only a handful of remakes in the history of cinema that have succeeded in this goal, most notably John Carpenter’s The Thing, Martin Scorsese’s The Departed and Cape Fear, and John Huston’s The Maltese Falcon. If you have nothing more to contribute to a story, then leave it alone until you can assemble a strong script, a director with vision, and a story can somehow exceed the material on which the film is based.
The Hitcher is another pathetic case of a disposable horror movie remake from a no-talent director (for other examples, see the remakes The Fog, The Haunting, The Texas Chainsaw Massacre, Black Christmas, 13 Ghosts, The Omen, House of Wax, The Amityville Horror, The Hills Have Eyes, House on Haunted Hill, When a Stranger Calls, The Ring, The Ring 2, The Grudge, The Grudge 2, and then there’s the sure-to-be-crappy upcoming remakes of The Hills Have Eyes 2, Halloween, and The Birds (the latter two are just sacrilege).