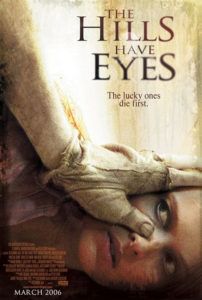 According to a foreword, the U.S. is responsible for over 300 atmospheric nuclear tests between 1945 and 1962; effects of radioactive fallout are still not completely known. Perhaps the remake of Wes Craven’s 1977 film The Hills Have Eyes was trying to say something with its title card and intermittent references to our government’s nuclear testing. Perhaps we’re meant to feel sympathy for the cannibalistic mutants chomping up on Average Joe America’s perfect little family. But once genetic mutants start pointing a gun at an infant, you’ll realize the facts are just a means by which the filmmakers can construct base horror. Craven produced this remake, one that slightly improves on the original, which isn’t saying much. Director of Haute Tension (2003), Frenchman Alexandre Aja took the helm this time around, offering a gritty heat to every scene and saturating the color with desert reds and browns.

We’re treated like morons from the get-go, as a cross-country-traveling family heads through the New Mexico foothills because dad, Big Bob (Ted Levine), just had to see the desert before retiring to California. Of course they stop at the most god-awful gas station west of the Mason-Dixon to fill up, and of course, that gas station just-so-happens to be run by an old coot who sends wayward travelers on a shortcut through the hills, which do not literally have eyes.
Instead, citizens refusing to abandon their homes during official nuclear testing were severely altered, transmuting into bubbly-skinned monstrosities. Rather than write a letter to their congressman about their radiation-induced maladies, the affected few apparently decided to become cannibals. (Note: One sasquatchian mutant is seen with pins in his skull and a neck stabilizer. Whatever doctor performed that procedure must be kicking himself in the pants for letting Mutie go.)

In all, there’s seven in the Carter family: Dad, Mom, daughter Brenda, son Bobby, daughter Lynn, and Lynn’s husband Doug and their child. It’s one big happy family. That is, until their shortcut turns out to be a deathtrap conceived by hungry rapacious freaks. After taking out the Carters’ vehicle, mutant creatures whisper on walkie-talkies, organizing their assault while the two men, Big Bob and Doug, head out for help. For a time, I actually believed one or both of the Carters’ two German shepherds were in cahoots with the hill “people”.

In the first half hour wandering, accidentally unleashed dogs are chased after, leading blindly-following family members right into the clutches of a hungry miscreation. Haven’t these people ever seen a horror movie before? Don’t they know better than to follow a dog until you isolate yourself? Or not to take a shortcut for that matter? I realized my theory about the collaborator dogs was incorrect when Bobby finds one of them gutted, its entrails removed to be presumably eaten.

The initial mutant attack tapers the family’s numbers down to half, and the baby has been taken into the mutant town—a mannequin-filled former testing site. Aaron Stanford’s character Doug enters Straw Dogs territory, heading out to kill him some mutant scum, and even nerdily pushing up his glasses in between slaughtering his assailants. Awkward Rocky-esque music sounds off as Doug stands proud of his manly victory achieved by ax, bat, or with the help of the family’s one remaining dog.

We’re bombarded with American-masculine glory here, which is odd, considering the foreword’s disdain for homesoil nuclear testing. One mutant is taken out by getting an American flag implanted into its skull. But perhaps it’s meant as ironic—you know us Americans, we love parenting mutants as children of our own mechanism. We’re proud of our own destruction of nature. Inside horridly gritty and visceral scenes, there’s an inexplicable insensitivity to the film’s characters. Family members die like slaughtered livestock, tortured into panicky states so that the latter part of the film we’re almost exclusively viewing screaming. These aren’t faceless teenagers who are killed by a brooding cartoonish Michael Myers, this is a movie that takes itself seriously when depicting a family destroyed. It’s a disturbing experience, partly because its brutality and cynicism toward its protagonist family is so emotionally detached, partly because I felt the result was not supposed to shock me but make me feel tortured. Not exactly pleasurable viewing.