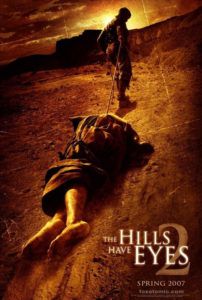 Wes Craven, director of the original The Hills Have Eyes parts I and II, produced the 2006 remake and wrote and produced this sequel to that remake. Only, it’s not a remake of the original 1985 sequel in which bikers are chewed up by mountainous mutant men, this is an all new story surrounding a group of anonymous American soldiers who get munched on by said freaks. So, you know, it’s totally different this time. Expanding from the comparably small scare of the first, this surprisingly not direct-to-video sequel fails by using James Cameron’s same sequel approach with Aliens—optimizing the movie’s “monsters” by offering up a slew of soldiers as potential victims. Aliens succeeded because Ellen Ripley from the first Alien movie returned, honing the audience into one particular character among the grunts. Here, no one from last year’s remake leads the soldiers into mutant territory, and the movie does a poor job of making us care about random casualties.

It’s explained to us that investigations into the slaughtering of the Carter family from the first film attracted the government’s attention. Setting up electronic monitoring in a Yuma Flatts, New Mexico Army Training Facility, a group of military scientists are slashed up by another mutie gang. Cut to another training facility, done up to look like the Middle East, where we’re introduced to our heroes practicing their less-than-impressive military skills. They’re inexperienced soldiers blasting away blanks at their faux enemies while yelling, “America is number one, bitch!” Once their training exercise is over, their superior chews them out for their soldierly stupidity—not promising for their eventual confrontation with genetic freakdom. All are young and attractive soldiers, except the dumb guy, who’s fat, and the nerdy guy named Napoleon, who’s anti-war. Anyone not in the collective is pointed out with distinction.

I forgot to mention that the first scene in the film is a non-mutant woman tied up, seemingly kidnapped and raped by the mutant freaks some time ago, now giving birth to an equally freakish baby. Rape appears to be the only way for these mutants to further their numbers. You’d think, since their lives aren’t the greatest, that they’d not want their kin to have the same genetic defect. Not so. And as soon as we see the female soldiers—who of course are typical horror movie “hotties” whose makeup remains unspoiled no matter how much blood and sweat spatters across their faces—we suspect they may be in a similar position later on.

Assigned to finding the missing scientists, the random soldiers trek into the hills (yes those hills) only to find themselves stranded by its ill-complexioned inhabitants. We begin to realize just how stupid these soldiers are, as one of them goes off to pee alone just after seeing a mutant. She ends up being the unlucky victim of an awful rape, which is shown in horrific detail. With all of the gore, blood, and guts throughout this film, did we really need to see a mutant raping a female soldier? Couldn’t we have just assumed that it happened? The first scene shows us the end result of mutant rape, so why not let the anticipatory fear take over? Then again, this movie isn’t about scares or anticipation, it’s about momentary shock value and racking up the body count.

The genetic monsters this time around are more creature-like, and even more faceless than the ones in the first. One of them is a 12-inch-tongued lizard man; another one is a kindly mutant who protects the soldiers and in a way resembles Sloth from The Goonies. And whereas at least one whole conversation was held with a mutant in the previous remake, these creatures end up just as disposable as the protagonist soldiers, personality-less and brainless, running on a primeval instinct to kill.

I suspect the ultimate intention of this film is to entertain through violence, bloody and disgusting violence. It’s nice however to be treated with the shyest amount of respect via even the suggestion of a plot beyond general ugliness. Characters are so artificial that when contrived moments arise with a soldier screaming “Don’t you leave me, man!” upon his superior officer’s death, we’re actually laughing at how awkward the moment is sandwiched in between scenes of terror. The film even goes so far as to pathetically suggest an Iraqi War parallel. One officer compares the “enemy in the cave” in Iraq to the mutants in the hills. And it’s the anti-war guy Napoleon who earlier claims talk is better than war who eventually resorts to nature’s most brutalizing weapon, a rock, to cave-in a mutant’s head. By the end, everyone is dead, nearly dead, or soon to be dead from the surviving freak(s). This was a worthless, hollow film.