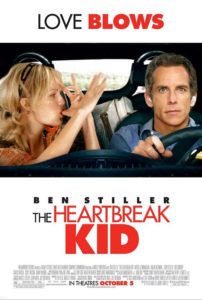 The Farrelly Brothers, Bobby and Peter, are best known for their first three successes Dumb & Dumber, Kingpin, and There’s Something About Mary, wherein they achieved massive box office draw through use of gross-out and shock humor. I remember laughing all throughout Mary when first seeing it; now that that film’s gags are known to me, what’s the point? Subsequent to Mary, their comedies became, well, dumb and dumber. Stuck on You made light of conjoined twins; Me, Myself & Irene poked fun at multiple personality disorder; Shallow Hal was so “sensitive” toward fat people that its chubby woman protagonist was played by skinny Gwyneth Paltrow, occasionally, but not often, shown in a fat suit. I’m happy to report the Farrelly’s new movie The Heartbreak Kid made me laugh throughout, but that doesn’t mean I ever want to see it again.

Ben Stiller plays Eddie, a single guy whose father (the hilarious Jerry Stiller) and best friend Mac (Rob Corddry) want to see him married. They tell Eddie to take the plunge after six weeks of dating Lila (Malin Akerman), a nice enough blonde who he saves from a mugger. He’s been accused of nitpicking women’s flaws, causing his eventual break-ups, and dooming himself to bachelorhood. Lila is asked to venture to Norway for her job, but can stay in San Francisco with Eddie if she’s married; without hesitation, she and Eddie are married and on their way to honeymooning in Cabo.

The first day on the road, Eddie wonders if he made the right decision. Enter typical Farrelly Brothers sex humor when Lila asks Eddie to perform sexual positions he’s never heard of. Stiller has that confused neurotic-guy look on his face all through the process. He knows there’s a greater problem when he asks to move to the missionary position and she asks him What’s that? The movie makes a strong case for pre-marital sex and living “in sin”, suggesting that to not do acts prior to tying the knot only allows for someone like Lila to enter your life. Or perhaps he’s just nervous, just nitpicking. Then again, she thinks “inhabitate” is a word. No, he’s not nitpicking; she’s a basket case.

On his honeymoon Eddie escapes while Lila is sleeping or bedridden with sunburn, only to meet Miranda (Michelle Monahan), a woman he falls for in one night. Monaghan has that chummy guy appeal, where it’s plausible for her to chug down a few beers and do it charmingly; she had the same effect in the criminally underseen Kiss Kiss, Bang Bang. Since every Farrelly Brothers movie requires an idyllic woman who is both beautiful and down-to-earth, she fits the bill nicely. But she’s the only pleasant character in an otherwise heartless movie.

We struggle to sympathize with Eddie whose excessive shallowness results in him lying to his new wife so he can go meet with this other woman. Yet we could care less about Lila, who is so stupid and annoying that she’s almost cartoonish. And Miranda is hardly around long enough for us to place our sympathies with her. Character impressions aside, there are barely enough jokes and frustrating set-ups to look past any such flaws, including several build-up moments where Eddie’s slew of lies and misunderstandings comes back to bite him in the ass. Stiller plays that same romantic comedy guy he’s been opting for since David O. Russell’s Flirting with Disaster in 1996. It’s a tired routine now and has been that way for years. The question is: When will Stiller realize it?

Previously made into a film by Elaine May in 1972, starring Charles Grodin and Cybill Shepherd, Neil Simon’s script for The Heartbreak Kid was rewritten by no less than five writers for this update—this may be why the movie has no heart, unlike recent comedies like Knocked Up and Superbad. The Farrellys have a way of relying solely on grotesque raunch and outrageous situations; that’s probably why their movies are so forgettable. Save for Dumb & Dumber, whose simpleton leads are so dim-witted they can’t help but be sweet, not one Farrelly Brothers movie has rewatchability.

Somewhere in the Farrelly Brothers’ seedy little hearts there are two romantics, I know it. Almost every picture they’ve made could be described as “romantic comedy”—nevermind the urine and fart jokes, there’s a heart in there somewhere. If only we didn’t have to see erect donkey penises or tolerate intentionally over-the-top sexual dialogue to find it. The Heartbreak Kid will no doubt make you laugh, but you’ll shrug it off shortly thereafter.