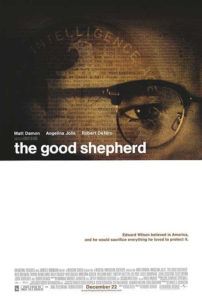 Don’t be fooled by the impressive laundry list of talented actors attached to The Good Shepherd. Ignore the promise of intrigue in the plot, which is based on the origins of the Central Intelligence Agency. Disregard that the screenplay was written by the writer of Forrest Gump and The Insider. Overlooking the potential for this film, you might begin to think this is a good movie… but you’d be wrong.

Matt Damon plays Edward Wilson, a very quiet, moral, and stoic figure. So stoic, in fact, there’s nothing really to respond to. After he attends Yale and gains membership into an elite secret society of former presidents and powerful intellectuals (Skull and Bones), he’s asked to help the FBI, and eventually, begins covert operations in Europe that will lead to the creation of the CIA. Wilson slowly suspects those around him, and disconnects himself even from his family. Damon’s character is never given development enough so that the audience might grow or become corrupted and obsessed with him. Instead, we’re always kept at a distance, never really knowing what motivates the character; because of that, much of Damon’s performance hinges on nothing more than going through the motions.

In the film’s first scenes, Wilson is shown in drag for a comic college play; he performs on stage with a smile, singing “my little buttercup” in falsetto. He appears to be a fun-loving young man. Wilson meets a deaf girl with whom he has a romance; with her, he is as compassionate and sensitive as the film allows (meaning he doesn’t say much and always looks distant). After randomly impregnating another woman, Angelina Jolie’s character, Clover, Wilson does the “right thing”: he leaves the deaf girl and marries Clover. But the film is unconcerned with Wilson’s emotional state; we aren’t shown the break-up or marriage scenes. As an audience, we’re given little reason to care about what happens to Wilson. Damon’s character is described as “ice” or as a “rock;” the performance is not necessarily pensive, but it’s not wholly empty either. Damon is just there as a familiar face. I never felt he evoked anything.

Because the CIA is known for its disinformation tactics to throw off its enemies, it could be that the writer and director of this picture wanted to disinform their audience by revealing only a modest amount about their protagonist. We are given shy allusions to Wilson possibly caring about something (perhaps his father, who committed suicide when Wilson was a boy; perhaps the deaf girl his morality forced him to abandon), but we’re never really told what that is. I don’t require that every aspect of a character be spelled out; ambiguity in a film is a clever way to draw an audience in. But Wilson’s character is so placid; I found it impossible to draw any conclusions based on his behavior. Only in the end, during the climax that I won’t describe, does the film communicate the clichéd theme of “innocence lost.” Perhaps Wilson’s innocence was lost the moment his father killed himself; perhaps it was a gradual decay. We cannot say.

When a movie’s main characters never truly reveal his or herself, be it a result of their occupation or of the screenwriter’s lacking abilities, it’s hard to justify an almost 3-hour running time. Because it dragged, when the film ended, I felt betrayed. All throughout the third act I kept hoping to find some key into his character, or for Damon to suddenly burst and finally let go. But the character is so one-note, I don’t think Wilson has more to offer. None of the characters are fully described, each are only impressions of people we never really get to know. If the finale finally cleared away some foggy truth, which took the two-hours-and-forty=minutes to uncover, I might have liked the film. Except it didn’t, and I found swallowing an anti-climax on top of almost three hours of such character-less punishment too much too take.

With a generally slow pace and little insight into character or plot motivation, I can’t help but blame screenwriter Eric Roth. The writer behind such scripts as Ali, The Insider, and last year’s almost-great Munich, Roth’s protagonists are often poorly described, though they may exist in otherwise well-constructed films. The dialogue is clever and the intrigue is implied with a subtle mystery, but similar to Roth’s other scripts, he gives his audience no reason to care. His protagonists are driven only because that’s what they do, not because of any element in the narrative. In any movie, from complex spy dramas to romantic comedies, stakes need to be set. Without them, why are we watching?

Director Robert De Niro selected a great cast (particularly Michael Gambon and William Hurt), yet he too failed to engage the audience. His film putters slowly along while the audience waits… And though there seems to be a suggestion of disclosure at the end, really the audience isn’t told a thing. It is hoped that we can make a resolution based on an assumption, which is based on an assumption, which is based on another assumption, until we realize there’s nothing to base these assumptions on, hence there is no real resolution. Granted, the CIA embraced patterms such as these in its heyday, but this isn’t the CIA, it’s a movie. Without a strong main character to deliver the message, no matter how ambiguous or symbolic, it’s hard to care.