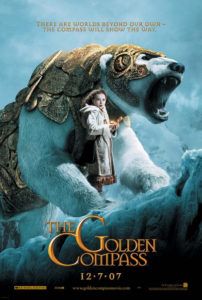 he Golden Compass is the best fantasy movie of 2007, not just because its special effects are more grandiose than the others, or that its laundry list of British talent is longer, or even because its first-time child actress displays a remarkable onscreen presence. Knowing virtually nothing about the story and little of writer Philip Pullman’s book Northern Lights (Brit title), on which the film is based, I was taken by how, in this vast fantastical world, the filmmakers donned their attention on their lead, a child, relying first on character development, and second on endless CGI animals and landscapes. That child, young woman rather, is Dakota Blue Richards playing the protagonist Lyra Belacqua. The actress won her role over some 10,000 other girls auditioning, and we see why in the film. She maintains humanity in her eyes and power over her voice. Her role calls for sarcasm and humor and anger and fear, and she coveys all these emotions wonderfully.

The story takes place in an alternate world where people and their souls are linked externally through two vessels, the human body and an animal counterpart known as a dæmon (an Ancient Greek term referring to a supernatural spirit). Lyra’s dæmon is Pantalaimon, appropriately shortened to “Pan” (voiced by Freddy Highmore), who morphs between being a bird, a weasel, and a cat. The dæmon of a mature adult does not change, as it has settled in its place. The reason for this is curious—something adults keep from children, something having to do with dust. Not the normal kind of dust, you see, but sparkling, golden dust that disappeared long ago but is now back, much to the dismay of The Powers That Be.

A despotic institute known as the Magisterium oversees this world, outlining moral and behavioral decorum for all people, especially children and their dæmons. Run by three High Couselors (played by Derek Jacobi, Christopher Lee, and Edward de Souza), the Magisterium searches for a golden alethiometer (compass), a fabled tool that is said to answer any question truthfully, but only if read by the right person, a prophesied girl. Lyra, attending Jordan College, is given this alethiometer as a gift from the school’s Master and is told to keep it secret, before being taken away to be an assistant to Mrs. Coulter (Nicole Kidman), a woman of great consequence. She has no idea of what she’s been given, and the consequences stemming from that. Neither do we, for that matter. The alethiometer’s origins will likely be reserved for future sequels.

Instead, Lyra hears rumors of children being taken by mysterious and deadly “Gobblers.” She vows to help them using her newfound tool, while her “uncle”, Lord Asriel (Daniel Craig) goes off on a funded expedition to find the rumored dust. And through a series of adventures, the girl comes into her own. She realizes Mrs. Coulter is after her alethiometer, and so runs away with Gyptians (a cross between gypsies and Vikings). She sets off on her journey with protection: an armored Ice Bear (voice provided by fantasy icon Ian McKellen) and a cowboy named Lee (Sam Elliot) who rides in a sort of hot air balloon ship.

If this plot sounds familiar, it probably should. For example, why does every story about a magical world take place in England? Part of me believes the British are all actually wizards and witches, communicating their ways to the world through fictionalized fantasy yarns. And the actors over there must be in on it too, as seemingly every Brit thespian makes it his or her duty to appear in or do voiceover for one to two fantasy films per year. For this story, it’s enough to know that, like in any escapist tale, we see wondrous things in unimaginable ways. What sets this film apart is how well the story is told.

The Golden Compass is the first in Pullman’s trilogy, which in whole is called His Dark Materials, and is followed by The Subtle Knife and The Amber Spyglass. New Line Cinema produced the film, hoping for another success like their stellar The Lord of the Rings films. The unlikely selection of Chris Weitz as director (whose only noteworthy effort behind the camera is the Hugh Grant comedy About a Boy) led to New Line sending their inexperienced helmsman to watch Peter Jackson work on the set of King Kong. Who better to teach Weitz how to make a blockbuster than Jackson, an accomplished visual and narrative artist? Weitz clearly learned much in his brief apprenticeship, as he constructs a film both dramatically and visually pleasing. (Though one wonders, what if someone of Jackson’s caliber had directed this film, someone experienced in big-budget filmmaking? How much better would it have been? Certainly a great deal.)

Now to address the point of this alleged anti-Christian subtext so evident in the media… From what I’ve read on the subject, the Catholic League has boycotted Pullman’s novel, hence the film, for anti-religious themes they believe are present in the books. Pullman’s writing features a Magisterium that is clearly the Catholic Church, but a skewed version of it that remains cartoonishly blatant in its villainy. Because of this, representatives from the Catholic League have contended against the movie, to prevent children from reading the source material (as if we need another reason for Junior to play video games instead of reading).

Chris Weitz’s adaptation mellows Pullman’s Magisterium and depicts it as an allegory for any dogmatic institution; the movie makes no mention of Christianity or Catholicism. The Magisterium is painted like a Monet, without too many details, just enough to make out; it could be any political, religious, or social organization hell-bent on forcing its ideas onto to a weaker party. In fact, there’s much talk of protecting one’s soul in the film, a message that works as a counterargument to the Catholic League’s smear campaign. We’re presented with a general argument against any force of power having too much control. Weitz created a more baroque antagonist; and frankly, had the media not covered the Catholic League’s claims so thoroughly, I might not have spotted some of the anti-Christian subtext.

Indeed, I find the Catholic League’s argument peremptory, if not hindering freedom of speech principles. Surely they have every right to make their reactionary claims. But as far as I know, New Line Cinema didn’t arrange a special screening for them back in October, when their declarations that The Golden Compass was anti-Christian first began. It seems they’re in opposition with a film they’ve never seen, and probably a book they haven’t fully read. And why not let children decide for themselves? By not allowing children to discover for themselves, the Catholic League proves Pullman’s belief lined in his novels: that the Catholic Church abuses what power it has. As Pullman himself said, “Why don’t we trust readers? Why don’t we trust filmgoers? Oh, it causes me to shake my head with sorrow that such nitwits could be loose in the world.”

But, as my job is to report what I see, without a doubt I can say this film, regardless of its origins, is not anti-Christian. If read as such, you’re probably looking for it (thanks to all the press), and not discovering on your own. Not a single mention of religious affiliation or “god” is present therein. If you’re adamantly religious and want to shield your children from independent thought, keep them away from Pullman’s books, but there’s no reason not to see The Golden Compass. I entered the movie with little-to-no expectation and walked away enthusiastic for the material. And the more I think about what I saw, the more I admire it. I sincerely hope it reaches the heights of mammoth franchises like The Lord of the Rings and Harry Potter, if only so that Pullman’s full trilogy is made into pictures as good as this one. When the film closes, I was reminded of The Fellowship of the Ring, where we’re given an ending that seems like merely the beginning of something greater. I can only hope we have the opportunity to see more.