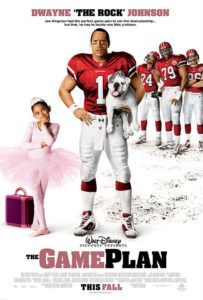 It’s troubling when you know you’re being manipulated but are helpless to do anything about it. That’s how Walt Disney Pictures’ The Game Plan makes you feel: helpless—because the little girl Peyton (played by nine-year-old actress Madison Pettis) is so darn cute and clever, because you can’t help but smile when she smiles, and because it’s funny to see pro-wrestler “The Rock” (whose name apparently must be referenced in quotes now) engage in ballet to please her.

My vulnerability to manipulative, sappy filmmaking doesn’t mean this is a good movie. It certainly is not well made or acted. We’re left coated with a thick Disney scum all over us, which we shed as the credits begin to roll, when we discover how ashamed we are that we fell for it. Remember when you were young and someone asked you to do something stupid, and without thinking, you did it? Later, when confronted with your stupid behavior, you asked yourself Why did I do that? This film has a similar influence on the audience. We ask: It isn’t funny, so why am I laughing? Are there seriously tears about to form? Do I feel giddy right now?  …It’s what Terry Gilliam harshly calls “cinematic rape”.

“The Rock” plays Boston Rebels’ star quarterback Joe Kingman, a self-obsessed celebrity whose catchphrases “number one on the field; number one in your heart” and “never say no” are repeated so many times in this film, it might make a worthy drinking game. And what kind of catchphrase is “never say no”? Should I not say “no” to drugs and premarital sex then? Also, Joe refers to himself in the third person as “The King”, decorating his ultra-posh apartment with Elvis memorabilia to underline the point. His celebrity and ego are widely known; all he has in life is football.

Enter Peyton, his never-knew-I-had-you daughter, who shows up at Joe’s door with a bag and says she’s staying a month. Joe’s ex-wife never told him about little Peyton, nor about Peyton staying with him while she went to Africa to help build water irrigators. Joe’s agent Stella (Kyra Sedgwick) only has Joe’s bank account in mind, so the sudden arrival of a kid is a warning sign. Once proving her legitimacy by way of birth certificate, Peyton and Joe are stuck with each other. And with the big game coming up, Joe doesn’t have time for anyone else but “The King”.

Peyton’s presence comes in to question when we’re shown Peyton’s mother, only she’s not in Africa. And where’s Peyton supposed to be? Certainly not with Joe Kingman. This is one of those learning-to-be-a-parent movies where dad does things only moronic movie parents do, like scream at their daughter “mine, mine, mine!” over a towel. Joe doesn’t want Peyton to touch his remote, bed, dog, kitchen, or anything that defines Joe as Joe. He learns his lessons quickly, as there are a number of filmic devices cranking away to make it a perfect working mechanism; except, when you can see all the moving parts the illusion is gone. Parental advice is dished out via football metaphors embedded into dialogue, such as “Sometimes parenting is like an audible…” Peyton also plays the typical kid who’s smarter than the parent, often telling Joe what makes a good father despite never having had one herself.

(Note: “The Rock” is credited as Dwayne “The Rock” Johnson. To that, I say pick one, Mr. Johnson. He’s been making credible appearances in Hollywood movies since The Mummy Returns (which is conversely not a credible film). His transitional movies like this one (and Gridiron Gang) mark his hesitance to shed his WWF persona. It occurred to me that to maintain the name “The Rock” for as long as he has, he would have to think of himself as such, making him an ideal choice to play Joe Kingman. Luckily, future movies listed on imdb.com, such as next year’s Get Smart with Steve Carell, list him as just “Dwayne Johnson”.)

Director Andy Fickman (She’s the Man) and crew made a film with enough formula to feed your newborn baby, as every predictable victory, either at Peyton’s big ballet recital or Joe’s championship game, occurs without conflict. Touching moments toward the end put Joe and Peyton’s newfound love for one another in jeopardy, and even though we know it’ll all work out, we still feel those formulaic moments tugging at our heartstrings. Being worked over by childlike humor and sappily obvious moments becomes tiresome after 90 minutes, and since this one runs 110 minutes, all through the last act we’re shifting in our seats. The clear personalities of “The Rock” and Madison Pettis aside, The Game Plan is simply too hard a recommendation for anyone over the age of ten.