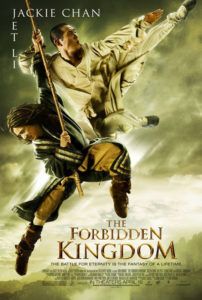 The Forbidden Kingdom boasts the first American onscreen collaboration between martial arts legends Jackie Chan and Jet Li. Based in part on Journey to the West, a centuries-old text from ancient China, the film is created from bits and pieces of Hollywood fiction meshed with convenient characters from Chinese mythology. Add a dash of American humor, plenty of high-wire effects, and references to every kung-fu movie since before Bruce Lee’s day, and the resulting movie recalls the best parts of Big Trouble in Little China in tone, yet the expert choreography we’ve come to expect from these two physical artists.

The story begins, curiously, in Boston. Jason Tripitikas (Michael Angarano, from Snow Angels) spends his nights dreaming about kung-fu, and then wakes up to bedroom walls decorated with vintage martial arts movie posters. Visiting an old shop owner in Chinatown to pick up new import DVDs, Jason finds a golden staff he’s seen only in his dream. One thing leads to another, and Jason finds himself transported to sixteenth century China, golden staff in hand, charged by Taoist monk Lu Yan (Chan) with the task of returning the staff to its rightful owner: an imprisoned-in-stone Monkey King (Li’s first role).

Trouble is, there’s a darned Jade Warlord (Collin Chou) sending out assassins and soldiers to track down the majestic staff. Jason teams with Lu Yan, his vengeance-hungry sweetheart Golden Sparrow (Yifei Liu), and a mysterious white-robed monk (Li’s second role), each teaching him the ins and outs of martial arts. Despite Jason’s proficient knowledge of Virtual Fighter 2 and classic kung-fu cinema, we’re taken through your standard (slapstick-laden) training montage, watching the boy quickly become a teenage warrior. And even though we can imagine studio executives with dollar signs in their eyes drooling over the west-meets-east advertising potential, criticisms are moot when considering the film’s basic entertainment value.

If Chan persists with his career in American film, perhaps he’ll forgo another collaboration with his three-time sidekick Chris Tucker (please—pretty please—no more Rush Hour movies) and make further pictures with Li. Even though Li claimed a few years back that he’s retired from the martial arts genre, his promise was quickly broken (see War). Good to see him back in his most enjoyable role(s) in some time, showing more life than his usual stone-faced heroes and villains. When two stars of this caliber dance in beautifully arranged battles, our jaws drop, because finally, these giants have met their match: each other.

With Chan’s presence, you can always expect proficient stunts, as he usually choreographs his own films. Chan likely had enough to worry about managing his character’s long wig, so Yuen Woo-ping (Crouching Tiger, Hidden Dragon) organized the fights and elaborate high-flying stunts. The Monkey King leaps from here to there with the grace of a feather, Chan flings off walls, and Li’s monk lashes his ever-so-long sleeves around objects like a whip. It’s all very easy on the eyes; we lose ourselves in the ballet, amazed that it continues with such grace, our minds turned off for the duration.

Nevermind the story—it doesn’t really matter in the scheme of things. We watch to be dazzled by Chan and Li’s talents, which indeed do evoke a sense of wonder. I could go on and on about how dreadfully cheesy the bookend Boston scenes play out, how adolescent the humor feels, and question why suddenly everyone in ancient China can speak English (much to our convenience). But lost amid extravagant production design, golden-armored knights, and magical powers assembled with colorful CGI-effects, none of those pesky logic issues seems important.

The Forbidden Kingdom was produced and distributed evenly between American and Chinese companies carefully structuring the film’s story (and marketing campaign) to appeal to both demographics. Though the result has its problems, we ignore them in lieu of escapist martial arts yarn, complete with enough subtle references to the genre’s archetypes to please any avid fan. Filled with elixirs of life, immortal gods, and warriors that can dance on the air, there’s enough diversion to satisfy audiences looking for straightforward entertainment. Sure, it has the taste of kid’s stuff, but your inner child needs a feeding occasionally.