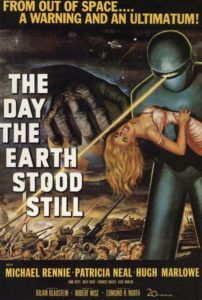 Before Atomic Era movies like Godzilla and Them! used the idea of nuclear weapons to proliferate a series of B-grade monster movie yarns, Robert Wise’s 1951 classic The Day the Earth Stood Still preceded the grotesque and escapist films in the making with a stark but simple cautionary tale. Years prior, The United States had dropped The Bomb on Japan, and the Cold War was deep into widespread paranoia, suspicion, and unease. And so, producer Julian Blaustein sought to create a scenario based on those rampant, fearful emotions through drama’s most metaphorical genre: science fiction.

Setting down on a baseball field in Washington D.C., a silver flying saucer opens to reveal a space man who announces, “We have come to visit you in peace and with goodwill.” The assembled military forces in hysterics over the sight fire and wound the alien. All at once, a massive robot named Gort emerges from the craft, and with its laser-eyes zaps the weaponry responsible. Klaatu, the wounded alien, played by the suave and intelligent-sounding Michael Rennie, commands Gort to stop with the words “Klaatu barada nikto,” realizing without his command the indestructible Gort could flatten the earth.

Later, those words are given to Helen (Patricia Neal), one of the other tenets of the boarding house where Klaatu hides after escaping his government captors, so she can prevent Gort from doing just that. Klaatu has arrived as a representative from an alliance of planets supporting intelligent life that has deemed Earthlings too violent. No explanation is offered as to why he looks like we do, though he claims to know English by listening to radio broadcasts. That might explain his cultured accent. But rather than just wipe us out like so many movie aliens attempt to do, he explores humanity. He does not want to destroy Earth, but we’ve become irresponsible with our atomic experiments and present a threat to peace throughout space.

Winning a Golden Globe for the “Best Film Promoting International Understanding,” the film’s message offers a universal warning from the conscience of the Atomic Era. Indeed, the last scene is Klaatu’s speech to the top scientific minds assembled by the understanding Prof. Barnhardt (Sam Jaffe): “Your choice is simple: join us and live in peace, or pursue your present course and face obliteration. We shall be waiting for your answer. The decision rests with you.” Audiences are asked to contemplate their decisions and those of their governments, in a time where criticism of the establishment got you branded.

Klaatu himself represents a figure of hope and widespread progress, as his assumed name while hiding on Earth is John Carpenter, the initials indicating his Christlike message, and his surname linking to Jesus’ pre-savior profession. Messages such as these are easily found in Wise’s clear-cut science fiction parable, but that’s the point. The film doesn’t want audiences to read between the lines; rather it slaps you in the face and awaits your reaction. Furthermore, the film offers reasons to save humanity, largely through the innocence of Helen’s son Bobby (Billy Gray). Klaatu and Bobby walk about Washington D.C. sightseeing, stopping at the Lincoln monument. The alien reads Lincoln’s words and suddenly all around him are the idealist views of American patriots, visible on monuments and tributes to our forefathers, inspiring hope. Bobby himself is a delightful boy, with all the Leave it to Beaver charm and virtuousness the 1950s had to offer. “I like you, Mr. Carpenter. You’re a real screwball,” Bobby declares, and immediately describes the plain morality of his time, an era worth protecting and fighting for.

As part of his ultimatum, Klaatu offers a demonstration of his power by halting all electronic and motorized devices on Earth for 30-minutes. Consider how the world would react today if an alien civilization landed and threatened us so. Would we ignorantly open fire without hesitation? Would we approach with open minds and hearts? Or would social and political organization crumble in a panic, with the rules of our little world at once shattered? How many of us would be able to put away the grand illusions of politics, race, borders, and class, and view humanity as a whole in light of our abrupt citizenship in a galaxy-wide community? Being truthful and honest with myself about the nature of the human race, the answers I come up with to these questions are not very encouraging. Are yours any better? I hope so.

The Day the Earth Stood Still makes a rare effective leap from sci-fi entertainment to political allegory, offering easygoing diversion if that’s what you’re in the mood for, but also some poignant commentary on the smallness of our petty worldwide in-fighting. These observations reflect our modern day struggles, as well. Advanced space exploration or the proof of extraterrestrial life offer quickened ways of getting our race to the point of universal human understanding, but with NASA’s recently announced plans to retire the space shuttle program in 2010 and aliens for now remaining mere lights in the sky, chances of such a slap in the face seem unlikely. What the film potently considers is the potential shock of such an occurrence—how our big world would suddenly be dwarfed by a force unimaginably foreign and powerful, rendering our individual concerns unimportant next to those of the whole—and then asks that we look past the science fiction to see how our current problems are much smaller than we build them up to be.