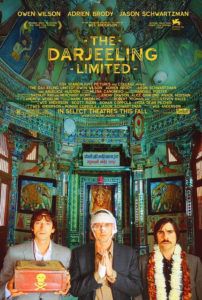 Wes Anderson’s comic world is a meandering one, wandering about and observing characters, places, eccentricities, objects, and colors. His pictures avoid straight-line theses and instead build to something more reflective, working on a theme that is never evident initially and so seems profound later on. His narratives are more discussions than arguments, examining singular, connective moments rather than following a path. We usually feel lost in his movies until the end—lost, but not misplaced. It’s like an afternoon drive where the intention is to roam and perhaps lose yourself. This is an ironic truth to his films since his direction, camerawork, and art production are clearly labored over, resulting in visual perfection.

The Darjeeling Limited is Anderson’s latest. It follows nearly every of the director’s storytelling tropes, beginning with emotionally astray characters. These would be three American brothers who meet in India for a desperate kind of emotional healing: Francis (Owen Wilson) shows up with bandages all over his face and head, saying he was in a motorcycle accident; Peter (Adrien Brody) has a wife who is six weeks from giving birth to their baby, but didn’t tell her he was leaving for this pseudo-vision quest; Jack (Jason Schwartzman) just broke up with his girlfriend (Natalie Portman) in France.

Note: The details of Jack’s breakup are detailed in Anderson’s twelve-minute short Hotel Chevalier, which was originally intended to screen before The Darjeeling Limited. Producers at Fox decided against the addition, but Wes Anderson made sure audiences could see the short online. Hotel Chevalier can be viewed for free by going to www.hotelchevalier.com, though I’m certain it will be on the movie’s DVD (hopefully another Anderson release from The Criterion Collection). The brothers meet on the film’s title train, all staying in the same sleep compartment, sharing space like three childhood siblings growing up in the same room. Traveling through the beautiful country of India, they attempt to piece together the last year of their life; they haven’t spoken to each other for one year, since their father’s funeral. They’re all potentially suicidal, all numbing themselves with prescription painkillers in place of more social drugs. 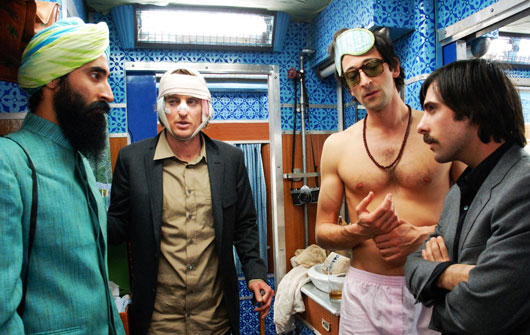 Jack and Peter are clearly in pain, stricken with melancholy expressions both Schwartzman and Brody excel with. Wilson’s Francis, the eldest of the three, reminded me of his character Dignon from Anderson’s first picture Bottle Rocket (1996); he’s an enthusiast, giving his two younger brothers a daily itinerary with every moment of their trip exhaustively detailed. Francis orders for his brothers at dinner and constantly suggests behavioral rules for their ongoing trip. He’s also confiscated their passports, to make sure his plans for their collective rumination don’t end with one or the other “escaping.”  Each of the brothers carries pieces of luggage with the initials J.L.W. printed on them. Bags and suitcases bear a sandy orange-brown color, with elephants and other such painted figures featured like polka dots (painted by Wes Anderson’s brother Eric). This baggage, along with a number of other material goods the brothers carry, become metaphors for their troubles: literal symbols of their emotional baggage. Peter wears his father’s glasses and shaves with his razor. Meanwhile, Francis says it’s not fair that Peter gets all of their Dad’s things. Anderson’s use of metaphor seems inconsequential at first, but that’s how he works; later everything has significance.

All these objects that are bickered over and seem simply the punch line of enduring jokes, they’re Anderson’s metaphors—just as their train seems to vagabond across India as its passengers do. At one point the train stops. Jack asks what’s happened and he’s told the train is lost. “How can a train be lost, it’s on rails.” Indeed, all the brothers need each other but don’t yet understand why, or how much. Even a stewardess (or is the politically correct term “train attendant”?) aboard named Rita (Amara Karan) seems out of place; Jack catches her with her head of her window, smoking. And of course, that’s Francis’ intent, to force them together to work through whatever keeps them apart on a long, confined train ride.  Anderson co-wrote the script with Jason Swartzman and Roman Coppola, both who’ve worked with the director before: Schwartzman as the star of the superb Rushmore (my favorite Anderson film); Coppola on The Life Aquatic with Steve Zissou as second unit director. The script’s richness with quirky humor flawlessly accompanies Anderson’s elegance in shot composition. His use of symmetry gives us moments where the brothers take foreground to the Indian backdrop in painterly bliss.

Not only is this one of Anderson’s most emotionally fulfilling pictures, it’s also his best looking. He’s always been a picturesque director, but the gorgeousness conveyed from scene to scene is breathtaking. The blues and yellows overtake the train, while Indian cites speak in vibrant flowering pinks and desert oranges. If I was told he filmed this picture in Three-Strip Technicolor, I might not be surprised. His use of color is striking—India hasn’t looked so beautiful in the cinema since Renoir’s The River, a clear influence of Anderson when making this film. One of the few comedic auteurs, Anderson tells stories in his own bizarre world that somehow we all relate to. His actors couldn’t be better chosen; many from his usual troupe are present. His production design is awe-inspiring. And it all seems foreign to us, these characters and how they behave, how this world looks. And yet, The Darjeeling Limited remains deeply satisfying and emotionally familiar, as all Anderson’s films do. It’s artistic yet accessible. Funny yet painful. It’s what we now expect from this filmmaker, which is no meager promise to live up to, or satisfy.