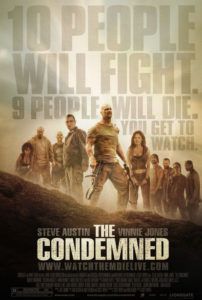 I saw The Condemned back in 1987 when it starred Arnold Schwarzenegger and was called The Running Man; even then I thought I’d never call a movie starring Arnold and Richard Dawson vastly superior to any movie, but here we are in 2007, and I’m eating crow. Produced by the WWE, The Condemned hopes to make a star out of wrestler Steve Austin, forgetting the giant lug has no personality. Austin plays one of ten international prisoners awaiting execution for a death sentence; he and nine others are “saved” from capitol punishment only to be dropped onto an undisclosed island. They’re told one of the ten will go free; all he or she has to do is kill the other nine. Of course, there’s a catch: each prison has an anklet with an explosive charge attached. Tamper with the band, and boom. Try to escape—boom. But if you “pull the pin” on someone else’s band, they’ll go boom.

Orchestrating this spectacle is multi-millionare Ian Breckal (Robert  Mammone), who broadcasts the event live on the internet, charging subscribers $49.99 to watch the prisoners slaughter each other. Breckal’s sarcastic tech guy (because there’s always a sarcastic tech guy) has set upward of 400 cameras all around the island so that they can catch every angle of every battle. Breckel’s goal is to get 40 million subscribers, beating out Super Bowl numbers without the benefit of a network.

The group of ten is comprised of supposedly all international prisoners, all of whom, save one, speak English. Breckel’s character contacts small prisons and pays off wardens to release their death row inmates for his game. At one point, Breckel says he wants an Arab, a “suicide-bombing” Arab to gain sympathy with his audience in the Middle East. Two women are placed on the island; both become sex objects for the other inmates. A husband/wife murdering team are two of the island’s contestants; only the wife seems meek as a lamb when she’s confronted with the island’s villain among villains, Ewen McStarley (Vinnie Jones, better known as Juggernaut from X-Men: The Last Stand). Women are needlessly slapped around and treated as weaklings, which seemed like a missed opportunity to depict the male inmates underestimating the women. Instead, both of the two women convicts are narrowly portrayed—either getting raped, or using femininity to seduce another convict.

Enter Steve Austin’s character Jack Conrad, who isn’t really Jack Conrad, but Jack Reilly (an inconspicuous cover if ever there was one) an ex-marine (just like Arnold in The Running Man) running black ops in El Salvador. Wrongly imprisoned, Reilly is a soldier thought to be dead and abandoned by his country. We know he’s the hero, because the first time we see him in his prison cell he’s feeding a mouse—only a nice prisoner would feed a mouse. Leaping off the ropes of wrestling into film, Austin plays a robotically one-note character, making somewhat versatile actor Dwayne Johnson (aka The Rock) look like a thespian in comparison. Austin is simply too big. Scenes where he runs are particularly painful, as it’s like watching a tank pretending to be a Lamborghini.

In a ridiculous subplot, the movie takes us to Reilly’s southern home, where his girlfriend and her two kids believe Reilly has disappeared. When she hears about the internet broadcast from the FBI (apparently unable to trace the internet signals), she rushes to the local bar where she works. Everyone in the bar gathers to watch the broadcasted murders. Howling like truckers (since most of the bar folk probably are truckers) when they see their friend Reilly taking out many a competitor, they become no different than audiences watching Friday night “Smackdown.”

So, in its finale when The Condemned tries to say that the viewers of senseless, orchestrated violence are the damned, the movie infers that viewers of WWE exhibitions, even of this very movie are “condemned.” Slowly Ian Breckal’s crew begins to question the morality of his show, and so we question the morality of this hypocritical movie, or the WWE-based production company whose foundation is based in coordinated man-on-man displays of violence.

Even if you ignore the film’s sexism, racism, American exceptionalism, and hypocrisy, there’s still nothing to appreciate. With dialogue barely worthy of a direct-to-DVD release and action scenes shot with an annoyingly-wobbly handheld camera, almost all of your senses will undergo agonizing torment. Try not to look at the screen too long (maybe check your watch or twiddle your thumbs), as every action scene looks as though the camera was placed on a bobble-head figurine, so even if you’re an action nut, the fights remain unwatchable. The whole picture, actually, is unwatchable.