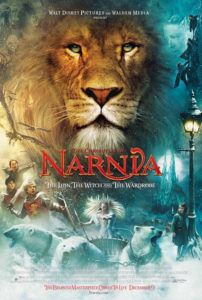 In 1959, author C.S. Lewis famously declared that he hoped his Narnia universe stories, seven in all, would never be adapted to film. After viewing The Chronicles of Narnia: The Lion, the Witch and the Wardrobe, I’m thinking he was right. Some properties are best left alone. But after The Lord of the Rings and Harry Potter adaptations rocked box office records and audiences alike, no doubt Hollywood just couldn’t keep away.

Action-fantasy has become a big seller of late. Some child or children or childlike Hobbits discover they’re the key to saving the world, and they band together with the armies of good to fight the armies of evil. Some filmmakers like Peter Jackson and Alfonso Cuarón can’t help but bring their own brilliant magic to the screen adaptations, while others falter trying to achieve greatness. Pencil director Andrew Adamson into the latter category; he takes not one risk in his given genre, playing it safe like comparable fantasy flicks Eragon, The Spiderwick Chronicles, or The Seeker: The Dark is Rising—all would-be franchises that have faltered under monotonous plots and mediocre special effects.

Curious, since this first entry in what is likely to be a long-running filmic series contains every repetitious feature and shoddy effect employed by those canceled franchise pilots. And yet, made for $180 million, the film earned $291 million back, meaning more Narnia to come. Analysts have chalked up the runaway success to Christian enthusiasts around the country piling their congregations into their church minivans and heading to local multiplexes. A noted Christian apologist, Lewis maintained religious allegory throughout his works, hence the appeal. We read Narnia’s lion Aslan (voiced by Liam Neeson) as a brave and self-sacrificing symbol for Jesus. The White Witch (Tilda Swinton, Oscar winner from Michael Clayton) could be a stand-in for Satan, after Hell has frozen over.

The story begins during the blitzkrieg on London in WWII, where the four Pevensie children find themselves hiding in a bomb shelter with mother wondering why her children remain in danger. Off to the English countryside they go, at the manor of Professor Digory Kirke (Jim Broadbent), where the youngest, the impetuous Lucy (Georgie Henley), finds a mysterious wardrobe that acts as gateway to Narnia, a mystical world of bottom-heavy centaurs, timid fauns, talking beavers, talking wolves, Santa Claus, and a Jesus-lion. Lucy guides her disbelieving siblings inside. Once there, Edmund (Skandar Keynes) sells his soul for some dessert, Susan (Anna Popplewell) acts as the family conscience, and Peter (William Moseley), the oldest, learns to lead them.

Fighting against an evil White Witch and her endless pursuit to keep wintry control over the vast lands of Narnia, animal and mythical creature alike believe the four children (dubbed “Sons of Adam” and “Daughters of Eve”—the Christian symbolism is never subtle) are prophesied to become kings and queens. But the Witch has plans to divide and conquer, fearing only Aslan and his mixed-animal army. If only those damn kids would stop squabbling and work together…

Herein resides the film’s greatest fault, that all-too-common blunder book adaptations will never escape: Much of the familial tone, spirit, what-have-you feels off, dissimilar from the book, and emotionally distant. Having read Lewis’ short novel, I noticed a change in the camaraderie between the Pevensie children, and felt pinned between siblings incapable of halting their nonstop bickering and in-fighting. Screenwriters Adamson and Ann Peacock and Christopher Markus and Stephen McFeely make the assumption of the familial bond for their audience, I think, whereas five minutes of pleasant empathy in the opening scenes would have provided a fine foundation. Instead, we see building blocks for the ongoing arguments between Edmund and Peter established more than their mutual love. As a result, I felt nothing for these squabbling children nor their heroic quest.

Fans might’ve gasped above when I called Narnia’s CGI-effects shoddy. Indeed, some of the computer work is praiseworthy. I enjoyed the flawlessly-visualized Mr. Tumnus (James McAvoy, from Atonement), even if his meek-yet-suspicious behavior recalls that of a pedophile. Aslan’s big cat musculature was spot on too. But look at the centaurs, with their cheap makeup no better than those cavemen on that insurance commercial… yikes. Observe the White Witch’s Buffalo Soldier, whose head looks like Davey Crocket shot, stuffed, and mounted the thing onto an actor’s shoulders.

Produced by Walt Disney Pictures and Walden Media, the filmmakers do their all to reinvent C.S. Lewis’ classic for post-The Lord of the Rings audiences. If that means inserting gratuitous battle scenes, then so be it. In Lewis’ text, the final battle lasts no more than a page, a brief addendum to their spiritual and emotional turns in the narrative. Adamson films clanging swords and booming combat lines with mindless flair. The White Witch twirls her swords as though she could emasculate the greatest of swordsmen, yet she can’t seem to out-maneuver Peter’s inexperienced hand.

Perhaps The Lion, the Witch and the Wardrobe simply comes too soon after the aforementioned action-oriented fantasy epics, making it seem like recycling. Or, perhaps, the film’s newer and more violent elements seem overly desperate to maintain teenager appeal amid this otherwise wholesome family tale. The result is uneven, but with any luck Adamson (should he continue to direct this series) and his conglomerate of highly-invested producers will get one of the next six Narnia tales right.