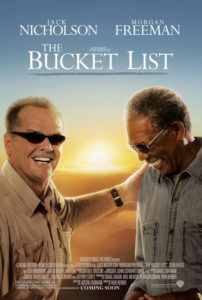 Terminal cancer is quite the lark in The Bucket List, a superficial and silly film about two patients undertaking a series of life goals during their last days. Carter (Morgan Freeman) is a sixty-something mechanic with children and grandchildren; Edward (Jack Nicholson) is a wealthy businessman and hospital owner, who must share a room with Carter to preserve his image in the public eye.

Directed by Rob Reiner and written by Justin Zackham, the filmmakers rely on Nicholson’s onscreen charm to make their movie work, forgetting that his character, Edward, is no cup of tea. His assistant (Sean Hayes) endures insults galore, seemingly charmed by the man’s general unpleasantness. Edward throws money at people in a way most would turn down because it makes them feel dirty; he expects the world to stop for him because of his money, and he treats most women like courtesans.

The most realistic part of the movie comes just before the most unrealistic. Sick from chemotherapy, both men endure the shakes, loss of appetite, and make desperate rushes to the restroom. In remission, each receives a six-to-twelve month forecast from their doctor (Rob Morrow). And then Edward finds Carter’s list of things to do before you die; since he’s a kajillionaire, he decides to show Carter the time of his pre-death life.

Forty minutes of poor computer-generated backgrounds and overbearingly schmaltzy soundtrack choices follow. Edward takes Carter skydiving, to the Taj Mahal, and on an African safari. But The Bucket List’s production never left California. We can almost see the green screen gently flapping behind Nicholson and Freeman.

You might ask yourself: Even in remission, would two cancer patients be able to do the things they’re doing? Doubtful. In fact, I wonder if two cancer-free men in their mid-60s would be able to do what they do. Edward and Carter race Mustangs, taking jumps like they’re limber men; they ride motorcycles; and they climb pyramids. Nevermind their catheters or fragile bodies—these men are superheroes. At least until the third act begins.

Reiner, devoutly purveying sappy movies over the last decade, has forever damaged his otherwise credible résumé and left us fans of his early works scratching our heads. The Princess Bride, This is Spinal Tap, Stand by Me, When Harry Met Sally, Misery—all great movies Reiner made in a sequence of hit after hit. And then afterward, the bombs: North, The Story of Us, Rumor Has It, and others I won’t waste your time mentioning here. Again, all in a row.

There seems to be two Reiner forces at work: the first creates pointedly human comedy and drama, and the second relies on every silly cliché ever embraced by rom-coms and feel-good pictures. Perhaps Reiner was overtaken by an alien sometime in the mid-1990s, an alien with a penchant for overt corniness. What I do know is that “Meathead” lost whatever he had; I only hope that someday he’ll get it back.

I suspect Morgan Freeman’s talent contract reads the following clause: “Mr. Freeman must narrate knowing anecdotes about the meaning of life, profundity-abundant recollections on what someone once said, and/or obvious thematic revelations concerning the very film wherein Mr. Freeman or Mr. Freeman’s voice are featured.” Indeed, Freeman provides voiceover all-too-frequently, usually in movies where his character carries an intelligent air. Carter is a history buff, so even when Freeman isn’t telling us the meaning of life via narration, his character uses historical metaphor for the same ends. Someday, I’d like to see Freeman play a nincompoop.

Likewise, I imagine Jack Nicholson’s contract requires that in every other role he attempt real acting; this must be one of the oddballs, a lighthearted goober where Jack simply plays Jack: a loveable scamp. Playing Edward is no stretch for Nicholson, nor is Carter for his costar—both actors seem to be on autopilot. Mind you, they’re both iconic performers; their mere presence onscreen speaks volumes above other actors. I just think they’re capable of more.

With its absurd sense of reality, The Bucket List is something of Arthurian legend or storybook fantasy, with its wealthy king taking pitty on a lowly surf. Very little about its characters, their medical predicament, their adventures, or how their adventures are put to film seems based anywhere in common reality. The movie’s epiphanies come rather easily and predictably, but its stars are big, respectable names, so we’re meant to overlook the blatant tearjerker formula in place of Jack Nicholson and Morgan Freeman behaving like kids again. The artificiality behind what could have been a touching story destroys any hope real substance.