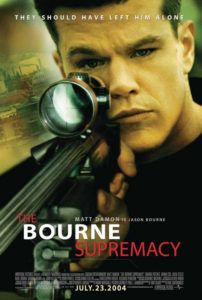 By the end of The Bourne Identity, Matt Damon’s Jason Bourne has escaped the corruption and immorality of his past crimes as a black-ops assassin, and now he just wants to live his life in peace. Unfortunately, those bastards at the CIA won’t let him. Based on Robert Ludlum’s second “Bourne” novel, The Bourne Supremacy is a sequel that in story outshines its predecessor. Instead of linear spy-action yarn, there’s a circulation around why Bourne is brought out of hiding and what (and who) began his career as the CIA’s lapdog killer. We learned in the first film that for Operation Treadstone, Bourne’s former superior Conklin (Chris Cooper, appearing again in flashbacks) had him plugging America’s enemies; now we learn that Conklin may have had personal interests for using Bourne as well.

When the film begins, someone with insider knowledge of the CIA frames Bourne for the double murder of two undercover agents. That starts a chain reaction where the CIA reopens its Bourne files, while elsewhere a rugged Russian assassin (Karl Urban) headhunts Bourne and his girlfriend Marie (Franka Potente), killing the latter in a tragic turn for our hero. And so, Bourne goes on a revenge-induced mission to find out why “they” have come looking for him. But at the same time, CIA director Pamela Landy (Joan Allen) starts asking a lot of questions about Treadstone. Somehow, all of this has something to do with Bourne’s first off-the-books mission, an elaborate robbery masterminded by a Russian criminal (Karel Roden, from Hellboy), and Bourne making amends with his first victim. Keeping track of it all is sometimes a guessing game.

Brian Cox is Ward Abbott, this film’s corrupt CIA official. What better actor to give this doomed character his fatalistic touch? Cox is an underappreciated presence, one who usually spends his time in supporting roles. He nearly stole the show in movies like X-Men 2 as Stryker and Spike Lee’s 25th Hour, and had a grandiose air with his extended cameo in HBO’s “Deadwood”. He steals every scene in this sequel, particularly those where he and Joan Allen’s character engage in wordy power struggles. Allen is a likewise talented performer, capable of holding her own playing the hard-edged CIA woman. Watching the two duke it out via tough conversation is perhaps more exhilarating than the film’s action sequences.

That said, smartly constructed action sequences, the greatest benefit of the first film, are painfully absent due to director Paul Greengrass’ shaky camera, so wobbly that we barely get an idea of what’s occurring in those otherwise thrilling hand-to-hand combat scenes. I became lost in what Greengrass was attempting to convey in these manically-filmed moments. If you told me Greengrass sought to use them as messy metaphors for the labyrinthine plot, I might believe you. Then again, I might just say the film is over-edited. Cuts do not follow action as much as they convey an effective level of energy. Viewers looking to connect one shot to the next should look elsewhere for consistency; the effect is rather like watching movement through a strobe light, flashing away in loosely connected images for a more kinetic outcome.

Greengrass also helmed the first quality movie about 9/11, United 93 (2006). Though that film was nothing more than a dramatic reenactment, many of the director’s tricks were carried over here. For example, we see Landy and Abbott in control room scenes (similar to Traffic Control and Army Base operations rooms in United 93) wherein a vast expanse of computers and jibber-jabbering CIA gophers search for Bourne on every known system on “the grid”. Landy barks out motivational jargon, most sentences ending in “people”. For example, “This is Jason Bourne we’re dealing with, people!” She also feels the need to remind everyone who they’re after, as if they’ve forgotten.

Jason Bourne has an emotional investment this time around; the first film ended with Bourne and Marie sailing into the proverbial sunset. When Marie is taken away, Bourne’s already pathetic existence is stripped away to even less. He suffers from headaches, barely recalls anything from his former life, but gets flashes now and then, reminding him of the horrible life he once led. Unlike the first film, Bourne is a more clearly described victim of government tampering, thus a more tangible hero character, whereas in the first there existed an ambiguity between hero and villain. Luckily, this sequel has more of a plot—an engaging mystery that we follow wholeheartedly even when the hectically-shot car chases and fist fights subside. Entering deeper spy-centric waters than the first, The Bourne Supremacy keeps its audience by using its action as an added bonus. Though that formula is opposite of the first film, it works nonetheless.