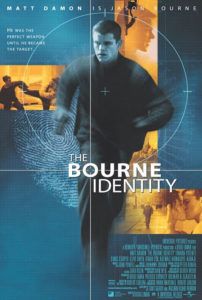 Though based on the novel by Robert Ludlum, The Bourne Identity doesn’t feel like one of the author’s brainier entries into the spy genre. The material has been adapted by screenwriters Tony Gilroy and W. Blake Herron into a fast-paced actioner with Ludlum-centric spy lingo populating the dialogue for good measure. Ultimately, however, this is a chase movie, where everything in-between the show’s impressive chase sequences is merely a setup for the next chase to come. As such, you might just want to tell your brain to sit this one out, since the movie doesn’t attempt anything beyond entertaining you with impressive car stunts and brutal hand-to-hand combat. And there’s nothing wrong with such basic goals, particularly when they’re executed as well as they are here.

The main character, whose name we eventually learn is Jason Bourne (Matt Damon), doesn’t realize he’s a super-trained, super-secret government assassin. He wakes up with a fishing boat’s doctor removing bullets from his back. The boat’s crew found him floating somewhere in the Mediterranean, unconscious, with two gunshot wounds. When he recovers, he doesn’t remember his name, where he’s from, but somehow he can speak numerous languages, and he’s got a laser pointer in his hip with a German bank account number encoded inside. Then he finds out he can take out two armed cops without breaking a sweat. It’s almost as if an Average Joe everyman was thrust into the role of superspy hero, and now has to deal with it.

As a result, versatile actor Matt Damon underplays his role; simply looking the part is enough. Bourne is virtually emotionless save for his frustration with his amnesia. Damon’s bony face and lean physique makes him an emblem of violence and youth—perfectly suited to engage in martial arts-laded fights with other super-spies, all set to an ever-present stream of techno music. But Bourne is not innocent, so he is neither a typical hero nor wholly sympathetic. He’s our protagonist, but also an anti-hero, since it’s made clear he has killed innocent people in the past. The key here is that he now clings to a morality through which he cannot see how he could have ever done such terrible things. Indeed, we get more than an inkling that Bourne might have a heart, which caused his predicament to begin with. The movie doesn’t really elaborate on this; it’s more preoccupied with the constant chase. Identifying with Bourne remains easy, unless you brood on the fact that when he kills the spies sent after him, he’s essentially committing suicide.

The Bourne Identity is not romanticized; this is not James Bond. It takes place in a world where the bad guys are the ones you should’ve been able to trust. And not all of them are really bad guys, since they’re just protecting their investment. All of the CIA’s corrupt black ops characters (Chris Cooper and Brian Cox) are the seedy types that probably went in with good intentions, but came out stained by their own abuse of power. Bourne isn’t fighting terrorists or a gang of high-IQ thieves; he’s fighting what he once was. And so, I can’t help but thinking about how when Bourne is in Paris and an assassin crashes through the window. Bourne attacks, and the two engage in a drawn-out sparring match that ends with the other one jumping out the window, killing himself after realizing he can’t defeat our hero. If Bourne hadn’t been stricken with amnesia, who’s to say he wouldn’t be “the other super-spy” at some point, killing one of his own? Perhaps it was fate or destiny or whatever that allowed Bourne (a name clearly referencing some kind of “born again” moral rebirth) to unconsciously bury his memories.

The Bourne Identity forgoes cheeky Bond moments where he seduces the girl; he does that naturally via his sympathetic condition. There’s a sly chemistry between Bourne and his tag-along Marie (Run Lola Run’s Franka Potente); although, the love scene seems forced and unemotional. But after a moment, Bourne is back out among the wolves, now with something to fight for (other than his own introspectiveness), making his final showdown seem all the more significant. The aforementioned techno music keeps the film’s tempo pumping, and boy does it pump with a constant barrage of impressive chase scenes (the car chase through Paris is the movie’s highlight), which is why we keep watching. Though the movie runs rampant with spy formula (corrupt intelligence people, cover-ups by government officials, brainwashed assassins, and so on), it all recedes into the film’s always-entertaining action sequences, which are for the most part CGI free. Watching Damon climb down a building’s flat wall, or miraculously out-drive French police in a Mini-Cooper, may not develop the actor’s talent (Jason Bourne isn’t Tom Ripley, after all), but it does make for satisfying summer entertainment.