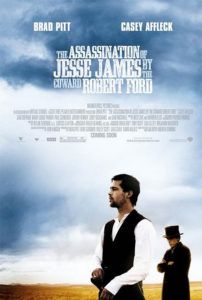 If all Westerns require touches of manifest destiny, then The Assassination of Jesse James by the Coward Robert Ford attempts to penetrate frontiers of fatalism, obsession, and homoeroticism. Based on the 1983 novel by Ron Hansen and adapted and directed by Australian filmmaker Andrew Dominik, this is untraditional Western storytelling. That’s not to suggest the film is post-modern; it reads like an elaborate historical biography, detailing dates and places. Dominik avoids relying on typical Western glorification of violence; instead, he trusts the faces of his actors to provide every bit of violence, lust, and conflict. What he has made is complex and staggeringly beautiful film, among the best modern entries in the Western genre.

The film begins in 1881, when Jesse James’ status was already legendary for defying post-Civil War Reconstruction efforts. Brad Pitt stars as the celebrated outlaw, who’s seen as a type of guerrilla Robin Hood figure. He’s married and has two kids, but they only know their husband and father on the basic level of a male presence in their home; they never know him. Pitt plays him without much dialogue, always with a suspicious peripheral view of things, always looking without looking, or otherwise piercing directly into your eyes. Jesse has done most of his killing and thieving by this time; he’s now tired and pensive. In real life, his fame was purported in the Kansas City Times through editor and associate John Newman Edwards and through dime novels that told colorful, exaggerated, and often wholly untrue accounts. His life is more fiction than fact, something we call a legend. Dominik’s film considers both the legend and the history.

Enter Robert Ford (played by Casey Affleck), who is a clear admirer of such tall tales; he’s like a modern day stalker whose exposure to celebrity media creates infatuation and delusion. At the age of nineteen Ford attempts to talk his way into Jesse’s gang. His brother Charlie (Sam Rockwell) is already a member, not that this helps Robert’s admittance. Jesse’s brother Frank James (Sam Shepard) chases the boy away with gun in hand, thinking Robert strange, if not off somehow. Robert goes directly to Jesse, and perhaps out of pity he’s allowed on The James Gang’s last robbery, after which, Jesse goes into isolation, separating from his brother and the gang forever. He keeps only a few ties as acquaintances, including Robert as his errand boy. All the while, Dominik shows how Jesse is aware of Robert’s obsession. In one scene, Robert is forced to confess the ways in which he and Jesse are similar. It’s a long list of things Robert has clearly considered for some time, consisting mostly of superficialities and meaningless coincidence drawn from petty similarities between the two, as if they were linked together like soul mates or lovers.

Casey Affleck gives a profound, subtle performance. Nothing in Affleck’s career has suggested he’s capable of a performance this good. His face remains sensitive and shy; he speaks to Jesse with sincerity, running down the list of their likenesses or looking upon him with something deeper than admiration. Affleck’s acting describes man whose fixation derives from love, which, though it’s never explicitly described, is apparent to both Robert and Jesse. Another film about Jesse James and Robert Ford, Samuel Fuller’s 1949 picture called I Shot Jesse James, studied the dynamic between Jesse and Robert with equal attention to homoeroticism. One scene that’s in both movies is Robert watching Jesse bathe. Robert creeps behind Jesse’s back, watching his idol in the tub. Dominik’s film has Robert hanging on the door like a lover, resting his head gently on the frame, gazing. Fuller went so far as to have Robert washing Jesse’s back, a blatant, stirring scene that plays with both Robert’s hidden obsession and the swelling, murderous tension between the two. Both films attain their own levels of brilliance—Dominik’s film has us oddly empathetic to Robert Ford, while Fuller paints a more cowardly and spineless picture.

We’re constantly asking ourselves: Why does Jesse keep Robert around? It’s doubtful he feels as Robert does. At this time Jesse was ready for death, weighing his life and conscience against his present distrust for everyone. He spends much of the movie killing former gang members who may divulge his location. He’s segmented himself from family and friends, even from self-acknowledgement. He spends his days with his children or looking out at Dominik’s immeasurable landscapes (shot by cinematographer Roger Deakins, who also shot this year’s flawless No Country for Old Men). Pitt dons Jesse James with appropriately tired eyes, glossy and round. Perhaps Jesse foresees his eventual death in Robert’s devotion—a fondness that cannot end with friendship or sex, only in death.

Filming on The Assassination of Jesse James by the Coward Robert Ford began mid-2005 in Canada, where the director could shoot vast, empty landscapes that symbolize the bleak personas of our two main characters. The shoot ended in December of that year and has been sitting at Warner Bros. ever since. Why did it take more than a year and a half fo the film to be released? It’s easy enough to guess: studio heads at Warner Bros. weren’t looking for such a thoughtful, artistic Western; they hoped for a Clint Eastwood-like take on the modern revisionist Western—something dwelling on the violence of the Old West, such as Unforgiven. While the studio fought for shorter cuts, all of which tested badly, Dominik held fast to his initial vision. According to reports, this is fully Dominik’s cut, and it’s perfect.

Dominik meditates on obsession and death in this two hour and forty minute picture, something of an emotional epic. From his movie Chopper, made in 2000, I wouldn’t have thought Dominik was gifted with such weighty qualities. He takes his time to tell the story, not moving forward for the sake of action. It works along the lines of Terence Malick’s Days of Heaven, making philosophical and metaphoric notes on its characters. Dominik’s massive picture looks beautiful; from snowy pastoral settings that look as if they were filtered with nineteenth century glass to foggy silhouettes moving ominously through train steam, his picture is fully realized. With 2007 being a year for great Westerns (3:10 to Yuma and No Country for Old Men all hit theaters within a 2 months of each other), here we have something singular, but in a way that few Westerns dare to be. The genre’s recent resurgence has given us a few of the best Westerns in decades. Dominik’s film challenges us with the complexity of its characters, who are delivered with two of the best performances of this year. In the end, we feel more sympathy for the humiliated and confused Robert Ford than we do the murdered Jesse James, and we’re left to ponder more than guns and horses. Rather, we consider an internal struggle, one that surprises us by creating sympathies where we wouldn’t expect.