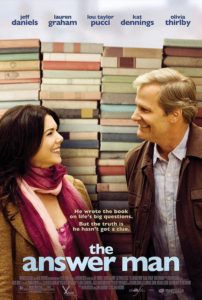 It baffles me why people searching for answers look to someone who’s been mute for two-thousand years. Maybe unconsciously they don’t want answers, because answers are too scary, so they ask the one “person” who can’t answer. People don’t really want to know the truth about their lives, I think, since most of it just disappoints. They want to have hope, so they ask questions to which they’ll never get answers just for something to do. Such is the case in The Answer Man, a cute little comedy about people with a lot of questions about their lives.

For twenty years the world has fawned over Me & God, a book lauded for its theories on the unanswered questions about faith and spirituality. (Don’t look for it at your bookstore—it’s not real.) Written by Arlen Faber, a man who claims he talked to God for inspiration, his is the most popular spiritual guidebook published since the Bible. The author, however, has remained a recluse since its release. Played by Jeff Daniels, Faber is now a crotchety old crab who enjoys horror movies and hides from his fanbase in his Manhattan home. When the nosy mailman (Tony Hale) finally figures out that this is the author of Me & God, which he’s read some forty times, he asks the first question that pops into his head: Is there a hell? Faber tells him “Hell is other people” and then slams the door.

Cut to the used book store down the street where owner Kris (Lou Taylor Pucci) struggles with staying sober. Living with his crusty, alcoholic father (Thomas Roy) doesn’t make resisting temptation much easier. His business is going downhill, no thanks to his witless hipster employee (Kat Dennings), and a deranged customer won’t leave him alone about buying used spiritual self-help books. Turns out the customer is Faber, who has turned to other people’s books and audio CDs to revitalize his long-since-gone faith. So Kris makes him a deal, he’ll take five books into his store if he can ask Faber for some spiritual advice; in exchange, Kris will maintain Faber’s anonymity.

Cut to the newly opened chiropractic office on the same street where single mother Elizabeth (Lauren Graham) still waits for her first patient. One day some guy named Arlen comes crawling into her office begging for help with his aching back. When she learns Arlen’s last name is Faber, her secretary (Olivia Thirlby) is awestruck, but not having read his books Elizabeth is dumbfounded. So she reads Me & God and over time she and the author begin to date (just ignore her medical ethics when she continues to treat his back during this period). She ultimately begins to fall for Faber when she realizes a bond has formed between Faber and her son Alex (Max Antisell).

As upbeat as the story sounds, there’re plenty of downer moments when we realize each of the main characters has their problems. Faber has been damaged by twenty years of solitude and the loss of his father. Kris’ alcoholism remains a problem because he despises AA meetings. And Elizabeth is too overprotective of her son to let herself be happy. The movie is filled with people looking to God, or Faber, for answers but getting none. The kicker comes when everyone realizes there’s none to be had.

The chatty acting and likable nature of the stars make up for cliché, predictable characters that feel too much like samplings from a cheap self-improvement text or Lifetime original movie. Daniels pulls off Faber’s eccentricities, excelling in the scenes where he becomes a cantankerous bastard. Graham doesn’t display much range beyond her character from Gilmore Girls, a protective-if-cool mother. And Pucci should find himself another agent, because the actor has talent—he’s just demonstrating it in movies nobody sees (Thumbsucker, The Chumscrubber, Fast Food Nation, etc.).

At times blithe and sweet, The Answer Man, an independent release shown at Sundance this year, is inoffensive and even wise, but it doesn’t resonate with its audience in any connective way. First-time writer-director John Hindman has ostensibly written the 90-minute pilot for a sitcom and put it on film. Unexplored character depth and needed developments leave us thinking there should be more, though we don’t exactly care that the film is choppy or that what’s missing isn’t already in the script. Worth a gander if you’re bored or not wanting to become too involved in what you’re watching, this movie might serve you well.