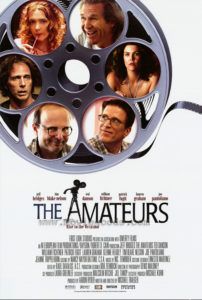 Jeff Bridges stars as Andy, who is not too far from Bridges’ own seminal role as The Dude in The Big Lebowski. He lives in a small town, small enough to where a guy like Andy is noticed. Usually unemployed, he’s divorced and in a funk, and when the film begins, we find him sitting in the local bar-grill-town-hall-type establishment. The patrons hover around him from a distance, at once frightened and exhilarated by what’s clearly going on in his head. An idea is brewing… With Andy, that usually means disaster; the townspeople often get drawn into his fruitless get-rich schemes. No one expects that he’ll propose making an amateur porno movie; upon hearing his idea, they don’t seem shocked, but rather enthusiastic about the financial possibility.

Writer-director Michael Traeger sustains light laughs and keeps his film moving with constant narration, read by Bridges’ Andy, something his script even admits is a filmic faux pas, but much to our delight continues with anyway. The movie might have been a sloppy array of random scenes without Andy’s spry observations, which are like a DVD’s director commentary, noting the importance of a certain moment or unintentionally giving away the ending. Bridges’ signature voice is familiar and casual and knowing—a pleasure to hear and immediately likeable.

To assemble his porn’s crew, Andy hires his group of pals: Writing and directing is friend “Some Idiot” (Joe Pantoliano), who qualifies because he’s taken one film class at night school. Barney (Tim Blake Nelson) is the producer and public relations coordinator—he’s just happy to have two jobs. Otis (William Fichtner) has his own idea: he wonders if there’s a guy who just stands around watching everything as it plays out, not necessarily doing anything—Andy makes him executive producer. Ted Danson plays the group’s closet homosexual who comes out after disastrously agreeing to be an “actor”. The brothers Moe and Ron (John Hawkes and Brad Henke respectively), dubbed “Moron”, are faithful production assistants. And the local video store clerk, Emmett (Patrick Fugit), has a handheld digital camera, so of course he’s the cinematographer.

But there’s the issue of getting a cast of men and women willing to commit unspeakable acts in front of a camera. In an ongoing gag, Otis proposes the woman who works at the bedding store, because why else would she want to be around beds all day, unless she liked whoopie?

Traeger is careful to keep his movie tasteful, not bombarding us with nudity for nudity’s sake. He seems vigilant to avoid such creative clichés, showing that sex can be the subject of a movie without showing us sex (a lesson that many modern filmmakers should take to heart). Perhaps that’s the purpose of The Amateurs, a praise of the anti-cinematic tell versus show. I would normally balk at such a stylistic choice, insisting that in place of bluntly illustrating sex there are ways to imply sex using visuals (see Trouble in Paradise), rather than have Andy’s narration explain it for us. But it’s a decision that Traeger is aware of, as his narrative acknowledges, and works around cleverly.

We become attached to this group of friends, who are all so naïve, so silly at times, that we forget what they’re trying to do (one of the problems never addressed in the movie). The cast is filled with popular faces, all actors regularly bound to supporting roles and comprising a tidy little ensemble. Their adolescent jokes and camaraderie are endearing, as they’re all so innocent and oblivious to the final result, which, because of the way The Amateurs concludes, reinforces the film’s decency and overall taste. The small town atmosphere remains quaint and true to its nature. It’s a charming movie in a way that I would have never thought a movie about pornography could be described.